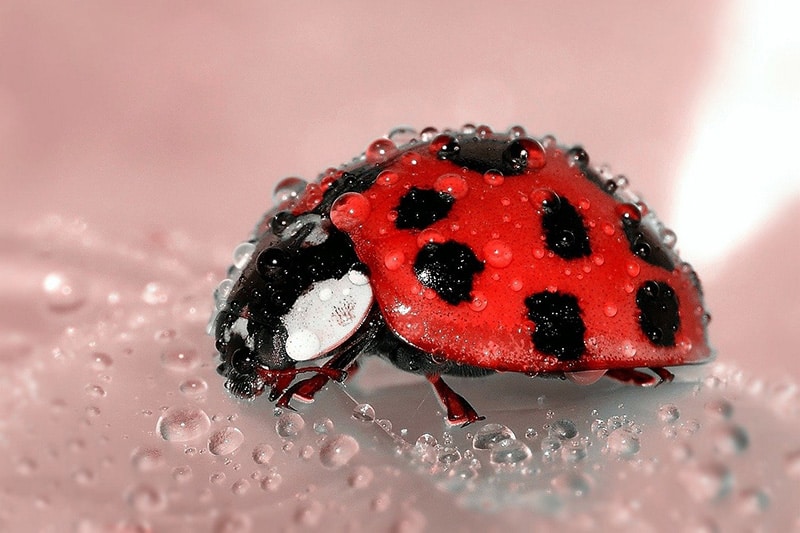 There are more than 5,000 species of ladybugs belonging to the Coccinellidae family. Their size varies from 0.8cm up to 1.8cm. You can find the beetles around the world, from North American and Europe to Asia.

Even though there are several thousand species of lady beetles, some are more common than others. Here are the 6 of the main types of ladybugs you might find in your garden, and not all of them are red with black spots. You also probably don’t have to worry about getting bitten by any of them.

Native to Australia and introduced in New Zealand to control black and gum tree scale, the Steelblue Ladybug shares the same characteristics as its red-colored cousin. The blue coloring is distinctive, though these beetles don’t come with the trademark black spots.

Backyards, fields, orchards, parks, and woodlands are the favorite homes of the blue ladybug. Unlike their North American family members that commonly eat aphids, a Steelblue beetle’s diet often includes plant lice, moth eggs, and scale insects. The beetle can bite, though it’s not poisonous.

Orange or Asian ladybugs are identifiable by their coloring, and the blackspots many of these beetles come with on their outer shell. The beetles have recently found their way to the United States from China, Japan, Korea, and other Asian countries. Orange ladybugs are also native to certain parts of Russia close to the Asian continent.

Unlike the red ladybug and other species, Asian lady beetles are aggressive. Their diet does consist primarily of aphids and scale insects, but the beetles will bite when threatened. Even though the Asian ladybug isn’t poisonous to humans, their bite can provoke an allergic reaction in some people. They will also irritate a cat or dog’s mouth and/or digestive tract if accidentally eaten.

Like the red-colored beetles, yellow ladybugs are native to North America, Canada, and Mexico. The yellow bugs are also referred to as Alfalfa Lady Beetles, even though they are rarely found on the plants. Like other color variations, yellow ladybugs prefer gardens, grasslands, and fields where aphids and other soft-bodied insects are normally found.

The pink spotted lady beetle is common around coastal areas. Its favorite food source is Colorado potato beetles that can decimate a farmer’s entire crop. It makes the spotted beetles a favorite among vegetable gardeners.

From a distance, their shell does appear red, but when you’re up close you can see the pinkish hue. Each wing cover has 6 black spots. Its body shape is also different from some other ladybug species. Instead of a more oval shape, the pink spotted ladybug has an oblong body. It can make it easy to confuse the beneficial beetle with other garden pests.

You may also like:  13 Examples of Animals That Hunt at Night (with Pictures)

You may not think this cream-colored beetle with brown spots is a ladybug. It’s native to North America and is welcome in any garden. Like other species of lady beetles, it eats aphids and lays its eggs close to the pests’ colonies. It ensures the larvae have a steady food supply after hatching. While the beetles do eat other insects, they also eat mildew and fungus.

These ladybugs are tiny, at only 2 to 3mm. You may have some in your garden without noticing their presence.

It’s easy to see an orange-spotted ladybug and think it’s a pest. The 3-4mm beetle has a black shell with orange spots. It’s also referred to as the ursine spurleg lady beetle. The organ-spotted lady beetle is native to parts of Canada, in particular, Ontario, Nova Scotia, and New Brunswick. Each black wing has 5 orange or yellow spots, making it easy to identify if you find one in your garden.

Along with aphids, these beetles also prey on scale insects and ant nests. Since one of their primary food sources are scale insects, the lady beetles are often found near fields of milkweed and deciduous forests.

Are there green ladybugs?

Ladybugs come in a variety of colors other than the recognizable red. However, green is one color the beetles don’t come in. When the beetles are coming out of the pupa state they can appear green but only for a few hours. Within twenty-four hours their shell will harden and turn into the color it will have throughout adulthood.

There are green beetles with black spots that look identical to other ladybug species. These are most often cucumber beetles and they can also be yellow or have black stripes instead of dots. Their habitat is also similar to ladybugs, making it even easier to confuse the two types of beetles. The primary difference between the two species is that cucumber beetles are considered invasive and destructive by gardeners.  Along with eating vegetable and flowering plants, the bugs also spread the cucumber mosaic virus.