While snakes nowadays are often depicted as blood-thirsty monsters, snakes have also historically been used as symbols in art, culture, and religion. Animals have commonly been used to represent different ideas, traits, or lessons however snakes are some of the more common symbols we see throughout time. In this article, we will focus on snake symbolism.

Snakes are prevalent in religious texts, stories, and lessons from cultures throughout the world.

Perhaps one of the most well-known examples of snake symbolism in religion in the western world, at least, is the serpent in the Garden of Eden. In this case, the snake is a symbol of deception and wit, which it uses to tempt Adam and Eve into disobedience.

The serpent represents a sly and cunning character, using its apparent charm to trick, manipulate, and lead people down the wrong path.

Snakes in Buddhism and Hinduism

Both Buddhism and Hinduism share a common part human, part serpent symbol called Nāga. Nāga is often illustrated as a multi-headed King Cobra, but can also take the form of a human.

This serpent is mainly portrayed as a “good” icon, associated with water and protecting precious gems. However, Nāga has also been known to poison people, but in these cases, these are people that have done wrong or are destined to live a short life. In this sense, Nāga also helps to keep order.

Snakes are fairly prevalent throughout Greek Mythology, with Medusa having hair made of snakes to turn enemies into stone just by looking at them. However, snakes are also a symbol of healing in Greek Mythology, and this symbol is still used today and is likely familiar for most people.

The Greek god of medicine and health, Asclepius, was said to learn how to heal people and practice medicine from a snake. Asclepius carried a staff with two snakes wrapped around it, which has since become a symbol in modern medicine and is seen on ambulances and in hospitals.

However, the Hopi tribe holds a snake dance every two years. This ceremony is intricate with many different components, but ends with dancers collecting many snakes and then releasing them in the four cardinal directions in hopes of bringing rain.

Jǫrmungandr was an enormous sea serpent in Norse mythology. He seemingly evoked fear in Vikings as he essentially held the earth’s fate. This serpent was believed to be so large that it wrapped its body around earth and was able to bite its own tail. It was believed that if this serpent were to release its tail, the beginning of the world’s end (Ragnarok) would begin.

Snakes as a symbol of renewal and rebirth

Throughout many religious and mythological texts and artworks, you can find the ouroboros- which is a symbol that has a snake curled in a circle, with its tail in its mouth. This represents eternal renewal, where the snake is both eaten and born from itself. This symbol can also be interpreted as life and death.

You may also like:  25 Cool Facts About Bearded Dragons

As many people know, snakes also shed their skin throughout their lives, which can be interpreted symbolically as another example of transformation, renewal and rebirth.

For this reason, snakes are a popular tattoo. Many people slightly alter the original ouroboros symbol, which is essentially a snake in a circle and instead get a tattoo contorted in the shape of an infinity sign.

Snake superstitions around the world 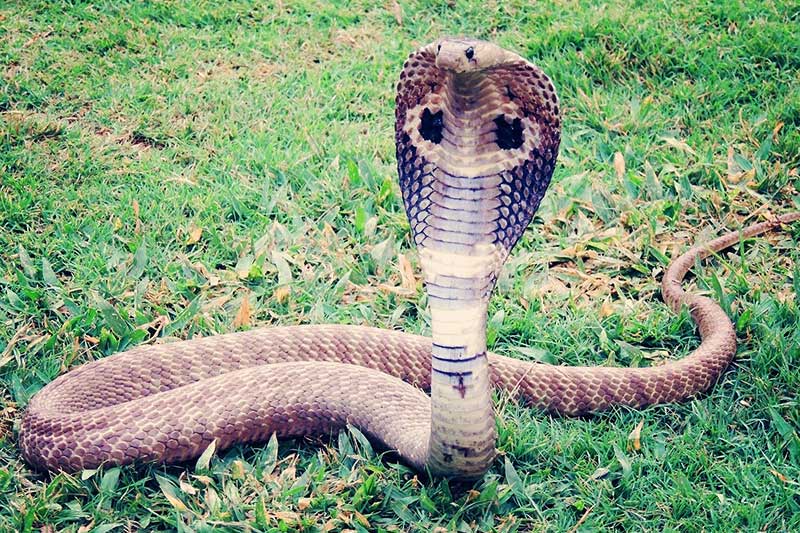 Throughout the world, there are many superstitions that surround snakes. Many of these superstitions have links to religion and mythology, while some have origins that are harder to decipher.

Japan: Snakes are a good luck omen. It is recommended that if you come across a shed snake skin, you should put it in your wallet to help grow wealth and fortune. Many people in Japan carry snake-skin wallets for this reason!

India: Getting bit by a snake will help to cure ailments and bring good fortune. Then there’s also the superstitious practice of snake-charming that still goes on in India. These snake-charmers are believed by many to be holy-men.

Thailand: If you try to harm or kill a snake, that snake, or the snake’s mate will remember your face and will follow you to avenge the snake’s death.

South Africa: Crossing over a snake’s track will lead to a skin rash.

Romania: If you bother or harass a snake that is sitting on a hill, it will bite its tail, create a circle with its body and roll down the hill to bite you.

United States: Killing the first snake you see each year will bring you good luck and victory.

In mythology and symbolism, not all snakes are the same. In fact, certain species, colors or types of snakes mean different things. Obviously, not all of these apply to all cultures, because some types/species of snakes may not be relevant to a culture due to the fact that they are not found in that region.

Snakes are prominent symbols throughout culture and religion. For some, snakes are a positive symbol- representing change, protection, and new life. For others, snakes are to be feared and symbolize danger, violence, and deception. No matter how you feel about snakes, it is hard to deny their importance as symbols in religious and cultural texts and pieces of art.