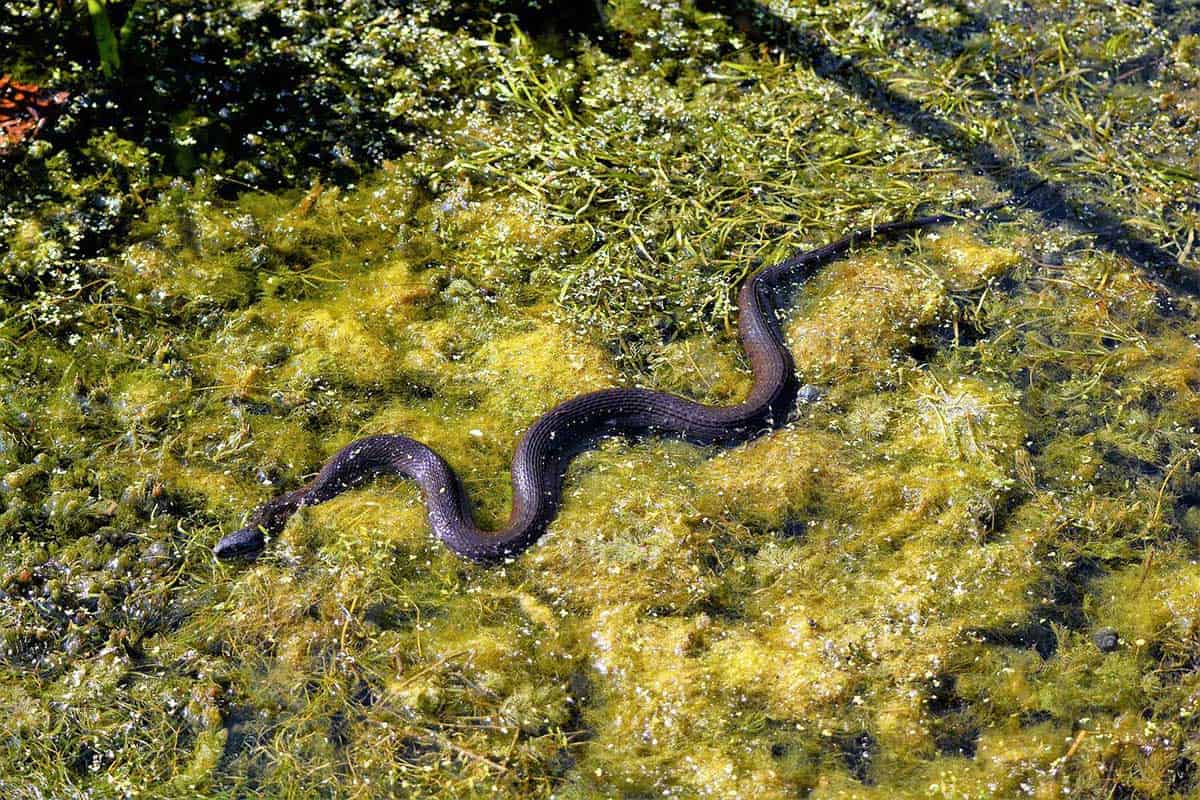 Virginia has a diverse range of habitats due to its orientation on the coast and along the Appalachian mountains, making it a dynamic place for reptiles and amphibians. There are just over 30 species (including subspecies) of snakes that call Virginia home. In this article, we will be looking at black or mostly black snakes in Virginia in particular.

Located nearly smack dab in the middle of the United State’s east coast, the state is home to many different species of fascinating wildlife. This wildlife includes not only reptiles like snakes, but also lizards and turtles as well as amphibians such as frogs, toads and salamanders.

10 types of black snakes in Virginia

As the name would suggest, the Northern black racer is in fact black. However, as hatchlings or juveniles they can actually be more grey and brown in color and patterning.

Adult black racers however are a uniform black, with a white or light grey belly and chin. These snakes can be found virtually all over Virginia and are most common in open, grassy or forested areas but can also be found in more suburban areas as well.

Despite its name making it sound like a boring or otherwise dull snake, the mud snake is actually a stunning specimen. These snakes have a shiny black dorsal side, but on their belly they have striking bright red and black stripes.

Unsurprisingly, these snakes are often associated with swamps, marshes and other habitats with stagnant or very slow moving water. In Virginia, Eastern mud snakes are only found in the very Southeastern portion of the state.

The Eastern hognose is a variable snake that can have a mottled pattern of black and grey, brown and black, almost red and brown, and some are almost completely black.

These snakes get their name from their upturned, pig-like snout and are well known for their dramatic performance of playing dead after being threatened. These snakes are rear fanged and are mildly venomous.

Their toxic saliva is not harmful to humans other than causing some light swelling and irritation, but is harmful to their prey. In Virginia, you can find Eastern hognose snakes in drier habitats like pine forests and agricultural areas.

Unsurprisingly, the Eastern black kingsnake is in fact black. It also has small, white speckles covering the dorsal side of it’s body and almost a black and white checkerboard pattern on its belly.

This snake is only found in three counties in the very southwestern portion of the state. However, they tend to live in habitats of all types including forests, floodplains, and agricultural areas.

The Eastern rat snake is Virginia’s largest snake, growing to be over six feet. The adults are completely black with white and black speckled stomachs, while the juveniles have a black and grey barred pattern.

You may also like:  20 Animals That Live in the Ocean (Pictures)

In other parts of their range in the Eastern United States, their colors vary widely and they can even be bright yellow. Eastern rat snakes are both terrestrial and arboreal meaning they can be found slithering around on the ground and up in the trees. They are very common in Virginia and are found in virtually all habitat types.

The official snake of Virginia, the Eastern garter snake is mostly black but has an orange or yellow stripe running down the center of its back and pale scales that run along the sides of its body.

They are widespread throughout the state and are found in many different habitat types where water is present or nearby. These fascinating snakes form large breeding aggregations in the spring when temperatures begin to rise.

The Timber rattlesnake is one of the three species of venomous (and harmful to humans) snakes found in Virginia. They vary greatly in color, with some having dark brown and black bands and blotches, while some individuals may be almost completely black. They are distributed throughout the western part of the state and are also found in a small pocket in the southeastern part of the state.

The smallest snake on this list, the Northern ring-neck snake is a secretive snake. They are rarely seen by people due to the fact that they spend much of their time curled up under logs, debris, or in shallow soil.

On their back, these snakes are almost completely black, but do have a thin, yellow or pale grey ring around their neck. On their bellies, however, Northern ring-neck snakes have bright yellow scales that they may display when threatened by curling their tail up.

The Eastern kingsnake is very similar to the Eastern black snake, except these snakes are completely black with thin, white bands covering the length of its body.

Kingsnakes are an especially interesting group of snakes due to their habit to eat other snakes, even venomous ones. Eastern kingsnakes are habitat generalists, meaning they live in many different habitat types.