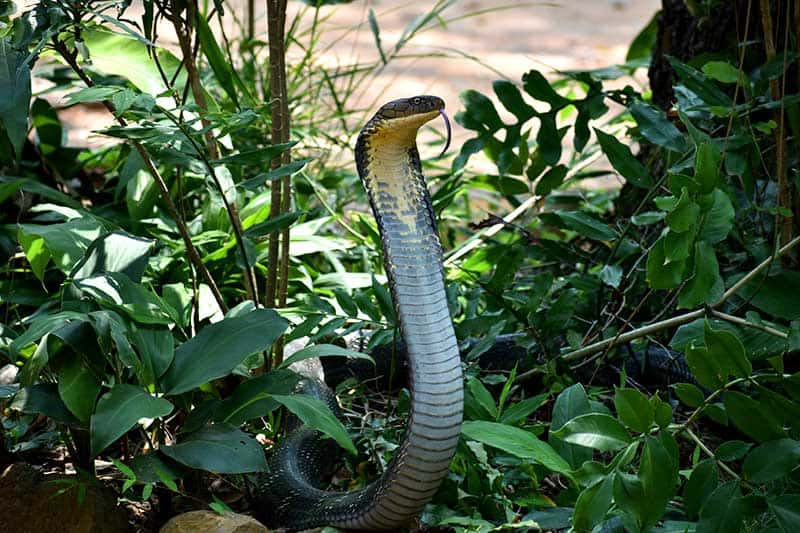 There are few snakes as impressive as King Cobras. King Cobras are the longest venomous snake in the world and are famous for their majestic hood that they display when they raise up in response to threats or predators. King Cobras have been the star of a few cheesy horror films, are icons in mythology in India, Sri Lanka and Myanmar, and are at the top of many snake enthusiasts “must-see” list. In this article, we’ll go over some interesting facts about King Cobras and answer some of the many questions that people have about King Cobras.

1. How big do King Cobras get?

The longest King Cobra ever recorded was just over 19 feet long. But on average, adult King Cobras are between 8.2-13 feet long with adult males getting larger than females.

2. Where do King Cobras live?

King Cobras are native to Southeast Asia. They can be found in parts of India, Nepal, Bangladesh, Myanmar, Southern China, Cambodia, Thailand, Laos, Vietnam, Malaysia, Indonesia and the Philippines.

3. What habitats can King Cobras be found in?

King Cobras have been found in many different types of habitat depending on where in the world they are. King Cobras inhabit forests, villages, mangrove forests, plantation forests, agricultural land and have even been found in suburban areas.

4. How toxic is King Cobra venom?

King Cobras have fairly potent venom, but it is far less toxic than other snakes that they are related to. In trials testing the toxicity of venom, the lethal dosage needed to kill half of the experimental sample (mice) was 0.125mg/kg.

5. How much venom can King Cobras deliver in a bite?

King Cobras can inject a high volume of venom which makes a bite from them very deadly. In a single bite, they can inject up to 420mg.

6. What type of venom do King Cobras have?

7. What do King Cobras eat?

The latin name for King Cobra literally means “snake eater”. King Cobras prey on snakes and are one of the only natural predators for other large snakes like Burmese or Reticulated Pythons. Another one of the more interesting facts about King Cobras is that they also eat very large lizards, called monitor lizards.

See the below video of a King Cobra eating a Burmese Python!

8. What are the natural predators of King Cobras?

When King Cobras are younger and smaller, they may be eaten by birds of prey, mesocarnivores and other snakes. But once King Cobras reach adulthood there are virtually no other animals that will eat King Cobras, except for other larger King Cobras.

9. How do King Cobras hunt?

King Cobras heavily rely on their sense of smell or olfaction as well as their eyesight to detect prey. Once they sense their prey, they will actively hunt their prey down and then deliver a sequence of deadly bites.

The IUCN redlist puts King Cobras as “vulnerable”, meaning that they are not endangered but they are at risk of becoming endangered. King Cobras are negatively impacted by habitat loss, poaching, and by humans killing them out of fear.

Any venomous snake can be dangerous, however venomous snakes like the King Cobra are only dangerous when they have no other option. Biting and injecting their venom is a last resort and they will not bite unprovoked. In fact, King Cobras are afraid of people and would prefer to just get away.

12. Why do King Cobras have hoods?

Some snakes, like King Cobras, have hoods that they display when threatened. By showing this hood, it makes them look bigger and therefore helps to ward off potential threats. King Cobras may also flatten their hoods to increase their surface area while basking.

13. Why are male King Cobras bigger than females?

Adult male King Cobras engage in combat with other males to compete for mates during the breeding season. Being bigger is advantageous for males so that they can overpower each other and is an evolutionary trait that has evolved over time.

15. Do King Cobra mothers care for their eggs?

King Cobras are some of the only snakes to provide care for their eggs. They actually build nests out of fallen leaves and lay their eggs inside the nest. The mothers will guard the nest for a few weeks, but will leave before the eggs hatch so that they don’t end up eating the hatchlings.

16. How many eggs do King Cobras lay?

The number of eggs that King Cobras lay is highly dependent on the size of the mother with bigger snakes being able to lay more eggs. King Cobras typically lay anywhere between 20 and 60 eggs.

17. How long does it take for King Cobra eggs to hatch?

It typically takes around eight to nine weeks for King Cobra eggs to hatch. Once they hatch, the babies will leave the nest and will be ready to hunt for their first meal. Baby King Cobras tend to climb high up into the trees after leaving the nest, presumably to hunt for smaller food items like small geckos.

King Cobras are diurnal, meaning they are most active during the day. However, if King Cobras get on the scent of a potential prey item they may follow it into the night.

King Cobras are very active snakes, meaning they need to eat more often than other species of snakes that are ambush or sit and wait predators. A healthy King Cobra during the an active season may eat once every month to six weeks.