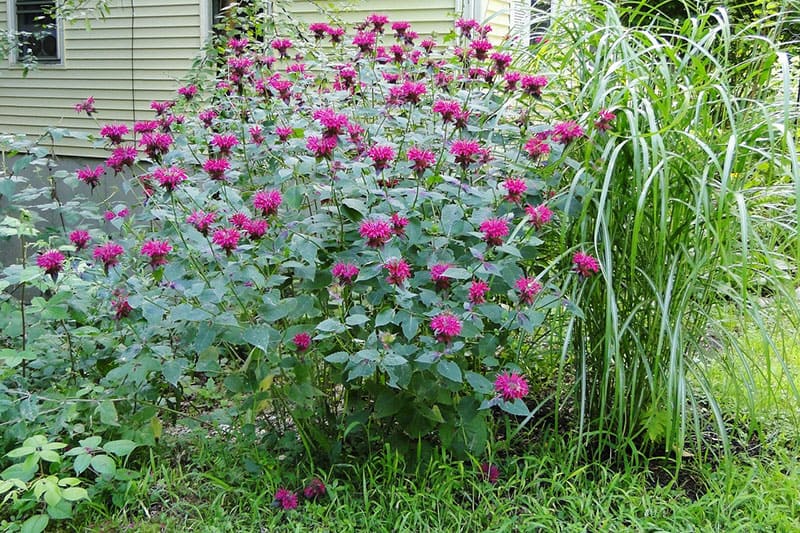 There’s nothing quite as crushing as putting your time and energy into cultivating a garden, only to have it destroyed by rabbits, groundhogs, or deer. You don’t want to harm anything beneficial that may be coming into your garden, but you want to keep out those pesky varmints. Fortunately, there are a number of plants that can help keep animals out of gardens who could potentially eat or trample things.

13 Plants That Keep Animals Out Of Gardens 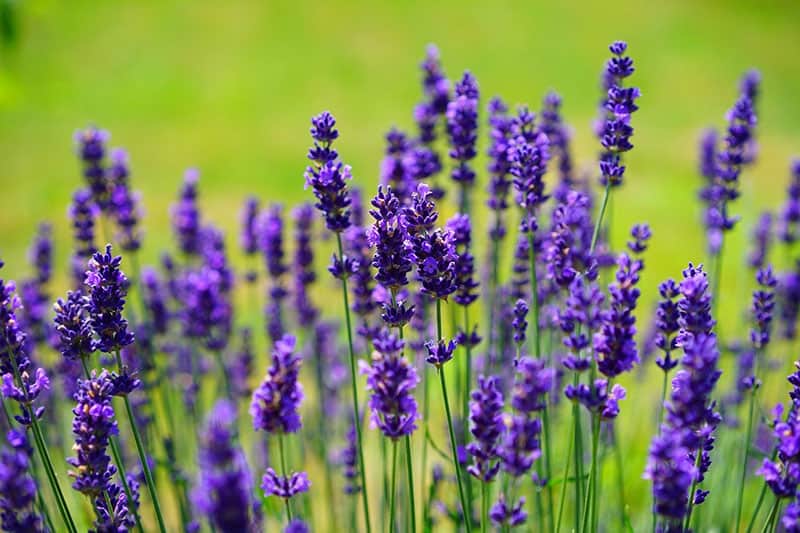 Lavender is not only a beautiful smelling addition to a garden, but it also deters pests. Lavender repels mosquitos and other insects, and also works to repel mice. With practice, you can learn to distill your own lavender oil to scent your house and keep the mice away. An extra benefit, lavender is extremely attractive to honey bees, so you can deter the pest you don’t want while attracting beneficial pollinators. 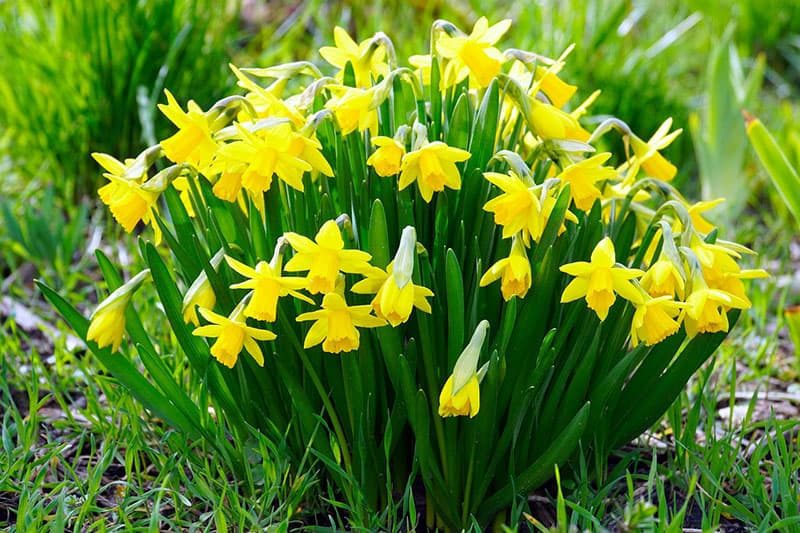 Daffodils are often used in a gardening practice known as “companion planting”. This is when two plants are planted around each other, not only for aesthetic but also for pest control purposes. The bulbs of a daffodil contain a toxin that is repelling to most insects, and mice, voles, and squirrels. Daffodils bloom early in the spring and are often planted to help protect the bulbs and seeds of later bloomers. 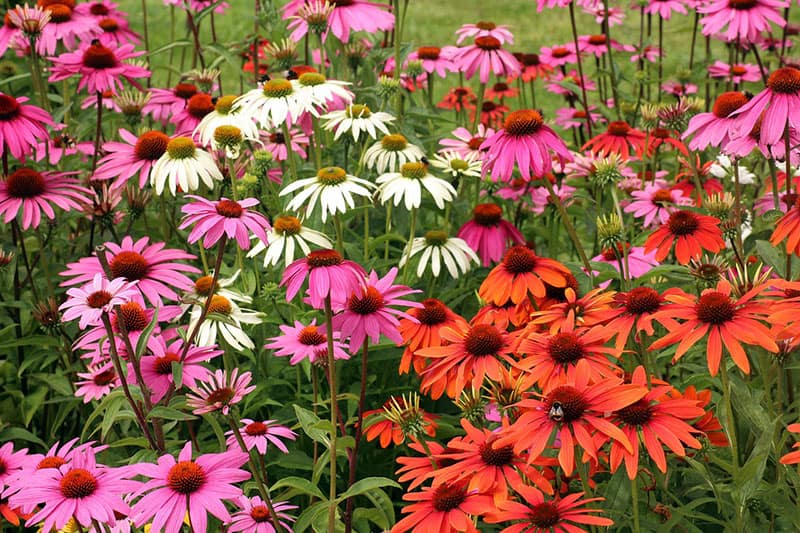 Echinacea, or purple cone-flower, is not just great for treating colds. The scent works well as a deterrent to keep mice and rats out of your garden, and away from your home. The Purple Coneflower is also known as the Tennessee Purple Coneflower and is the state wildflower for Tennessee. 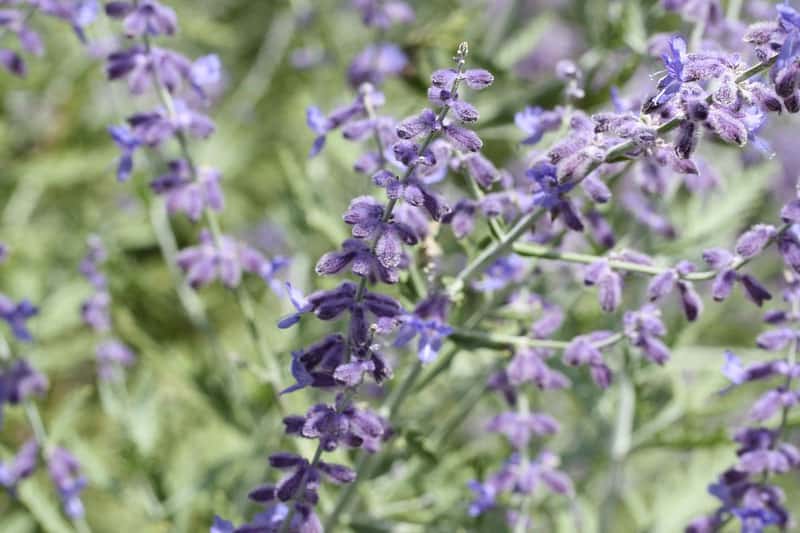 Russian sage is an aromatic herb, that forms a 5-foot tall shrub. What makes this plant a stand out, aside from its smell and purple-blue flowers, is its ability to repel deer. It’s aroma while pleasant to people is a deterrent to deer. It is an extremely hardy plant that does well in full sun. 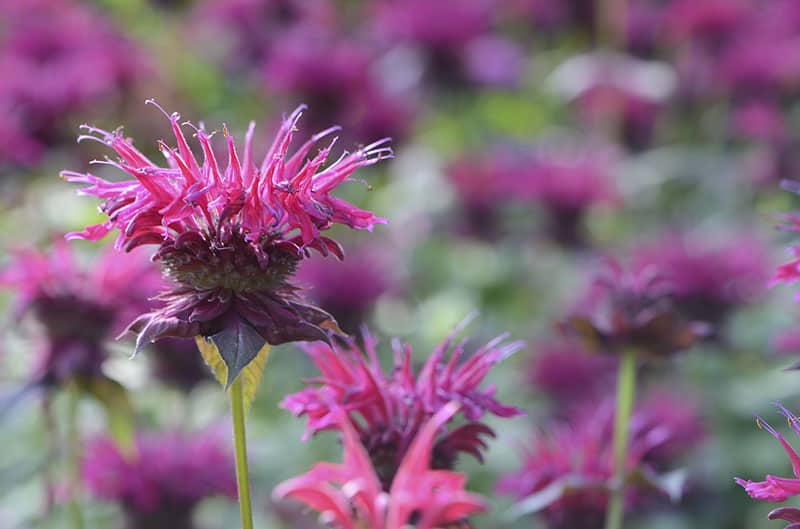 Bee balm is available in a variety of colors and is excellent at attracting pollinators. It is also useful to plant in herb gardens as a deer deterrent. Bee Balm does well either in the ground or as part of a container garden. 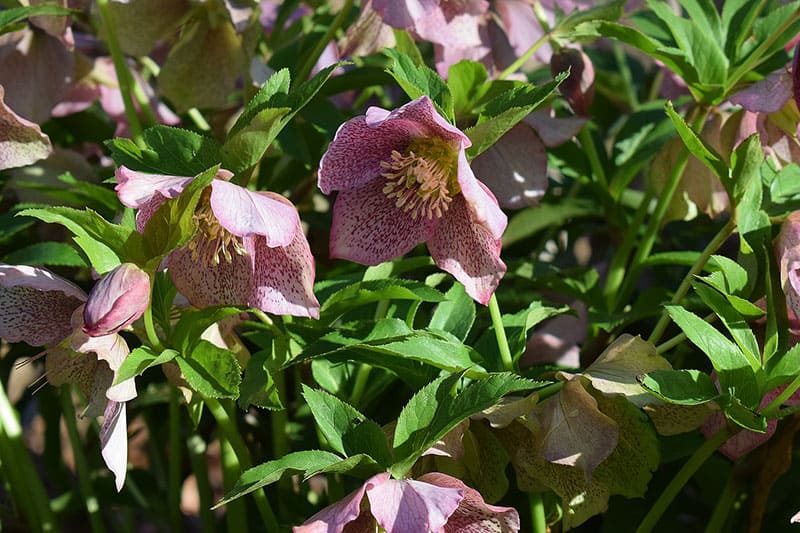 The Lenten Rose has a delicate appearance that belies how sturdy it is. This evergreen forms a shrub that blooms with pale purple flowers in spring. It is not only hardy and attractive it also helps keep voles away. 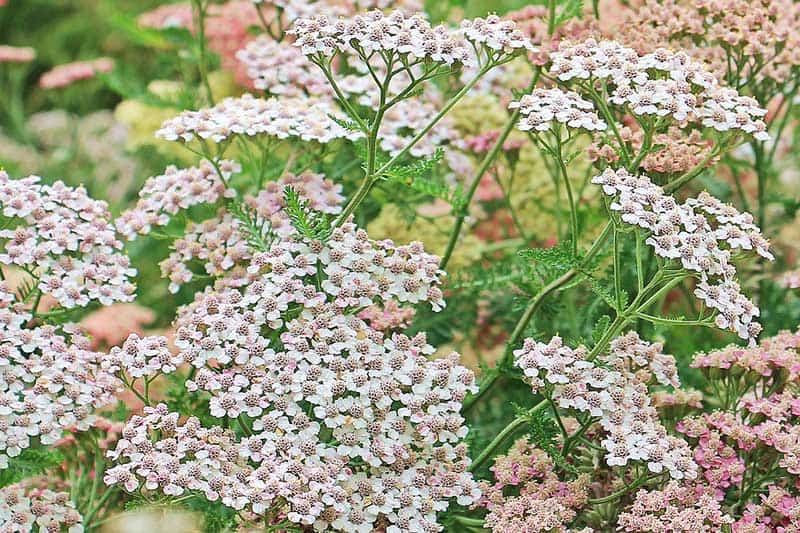 Yarrow is a flowering herb that is used as a natural remedy for a number of ailments. Fever, stomach problems, colds, and more. Yarrow is useful for more than just medicinal purposes, it is also an excellent deer deterrent. If planted around the edges of your garden it will help keep the deer from venturing into it. It comes in white, yellow, pink, and red varieties. 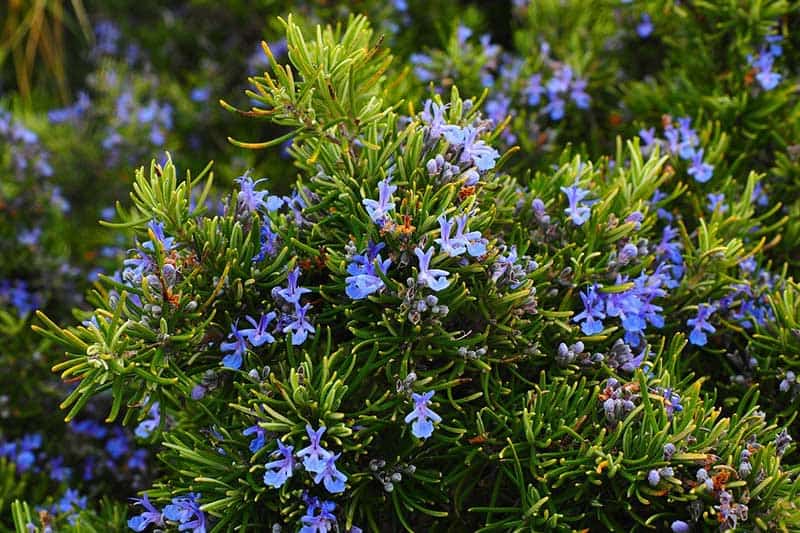 Rosemary is the perfect addition to any garden, herb, or flower. It makes an excellent container herb and has beautiful blooms similar to lavender. It is aromatic and extremely useful in the kitchen. It can also be used to repel not only deer, but also mice and rats. It can be planted in a garden, or placed in a container that can be moved as needed.

You may also like:  How to Get Rid of Boxelder Bugs

Lemongrass is a spidery plant native to South East Asia. It is used in a number of recipes because of its lemony flavor. It can be grown in your garden to add zip to your soups and also to repel mosquitos. It can be placed in pots and strategically moved to where you need it most. The smell of lemongrass also has some effect on keeping mice and rats away from your home and garden. You can never have too much garlic, especially if you have a mole problem. Planting garlic around your flower beds can help prevent moles from digging up your garden. It is especially effective in keeping moles away from your roses. It may be effective since moles depend on their sense of smell when burrowing, and the strong smell of the garlic can interfere with this. Anecdotally, garlic also acts as a deterrent to rabbits. 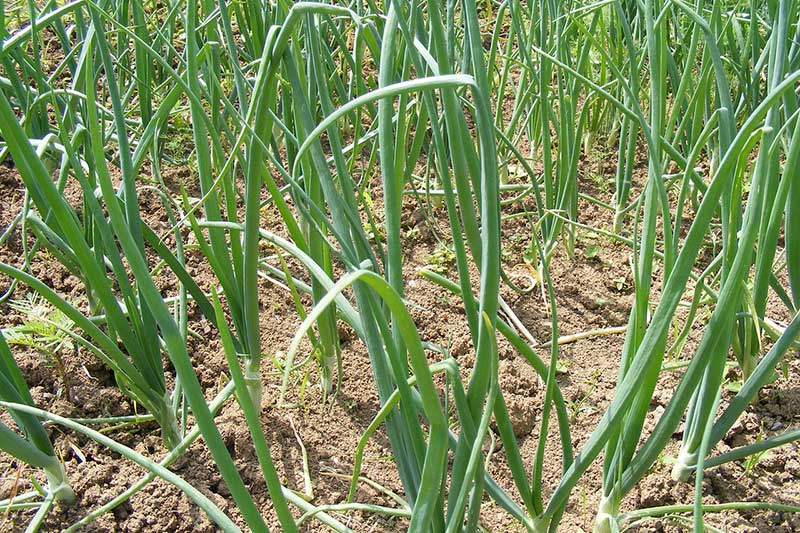 Onions are a cousin to garlic, so it’s no surprise that they are both effective at repelling animals from your garden. The strong smell from onion plants keeps deer away, and also deters moles from burrowing through. A combination of onions, garlic, and other aromatic herbs has been shown to be highly effective against deer. Stong odors interfere with a deer’s ability to smell potential predators and makes your garden seem far less tempting. 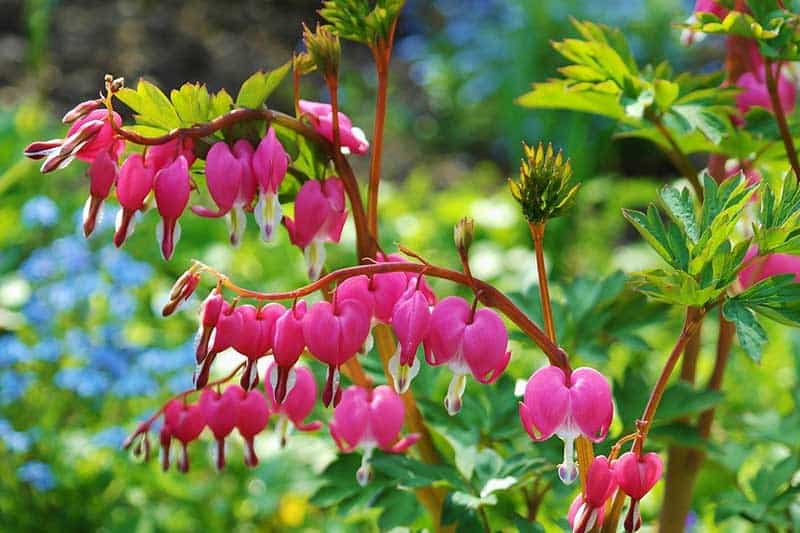 Bleeding hearts are a beautiful flower, and also a deterrent to deer. Adding them along a border, or mixing them in with the rest of your plants will help keep deer from grazing in the rows. A word of caution. Bleeding Hearts are toxic to dogs, so if you have a dog that occasionally chews on your plants, you may want to find another deterrent. 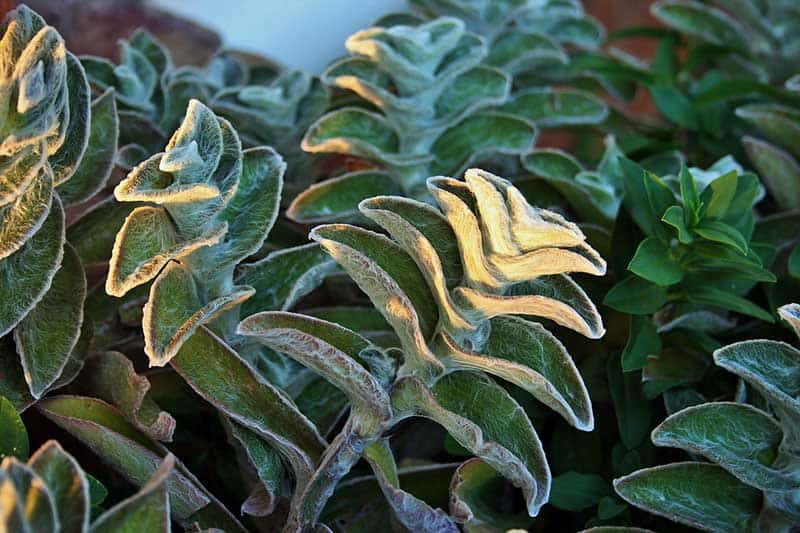 This plant gets its name from its silvery green fuzzy leaves. These fuzzy eaves are also what make it a deterrent to deer. Deer are also put off by the silvery color of the leaves. Plants with leaves this color are often deterrents to deer. Lamb’s ear acts as a ground cover, and if planted as a border will help keep deer from making a buffet of the rest of your plants.