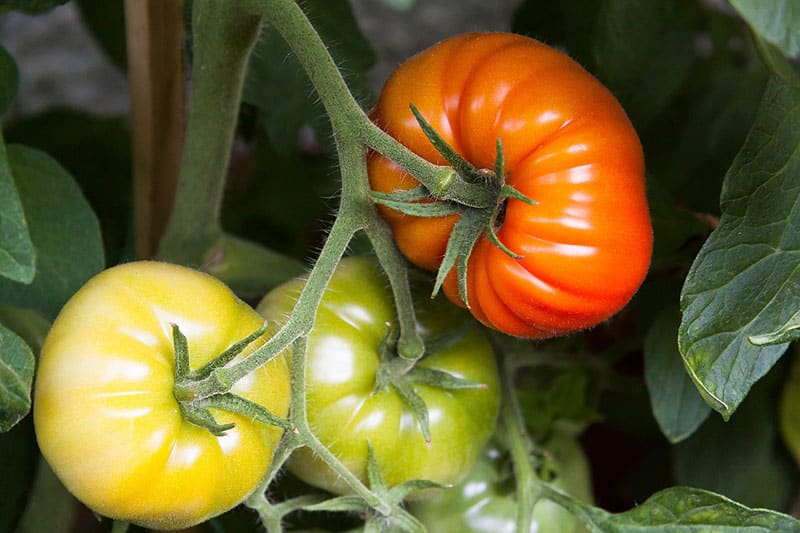 Most gardeners have experienced the frustration of finding their carefully tended plants nibbled or completely devoured by some type of animal. While it can be tempting to view these creatures as pests, it’s important to remember that they are simply doing what comes naturally to them.

From deer to rabbits, groundhogs to voles, many animals find gardens an easy source of food. So, whether you’re hoping to keep your plants safe or just curious about which creatures are munching on your tomatoes, read on to learn more about animals that eat garden plants.

Here is a look at 13 of the most common animals that eat garden plants and some interesting facts about each one.

Deer are perhaps the most notorious plant-eaters in the animal kingdom, and they can cause serious damage to gardens and landscaping. These elegant creatures are particularly fond of leafy greens, but they will also munch on just about any type of plant, including flowers, fruits, and vegetables.

They have small teeth on their lower jaw and a hard pad on the top of their mouth, which helps them to strip leaves and bark from plants rather than biting them cleanly off.

Rabbits are small, furry animals known for their love of carrots. However, these cute creatures are quite versatile in their diet and will also enjoy eating other garden vegetables such as lettuce, cabbage, and kale.

In addition, rabbits also eat a variety of grasses and herbs. Interestingly, rabbits are not capable of vomiting, which means that they have to be very careful about what they eat.

Squirrels are another type of animal that is frequently found in gardens. These playful creatures are known for their love of nuts and seeds, but they will also eat fruits, berries, and succulents.

Squirrels have sharp front teeth that they use to bite through tough skin or shells. They also have powerful back legs that help them to jump and climb. This makes them particularly adept at raiding bird feeders.

Groundhogs, also known as woodchucks, are large rodents native to North America. They are a close relative of the squirrel and are known for their burrowing habits. These animals have a diet that consists primarily of plants, including grasses, herbs, fruits, and vegetables.

Groundhogs have sharp incisors that they use for cutting through tough plant material. They are generally shy animals but can become bold if they are hungry or feel threatened.

Chipmunks are well-known for their cheek pouches, which they use to hold food. These playful creatures are common in many gardens, where they feast on nuts, berries, and vegetables. While chipmunks typically eat various garden vegetables, they have a particular fondness for tomatoes.

Chipmunks typically have two litters of babies per year, with each litter consisting of around four to six baby chipmunks. They are also excellent swimmers.

Gophers are small, burrowing rodents found in many parts of North America. They have long, sharp claws that they use to dig tunnels underground. Gophers typically eat plants that are found underground, including roots, tubers, and bulbs.

However, they will also eat above-ground vegetation such as fruits, vegetables, and grasses. Gophers are born blind, hairless, and weigh less than an ounce at birth. They grow quickly, however, and can reach up to two pounds as adults.

Slugs are slimy, soft-bodied creatures that are closely related to snails. These garden pests are most active at night, and they can do a lot of damage to vegetation in a short period. Slugs feed on various plants, including leafy greens, tomatoes, and strawberries.

They also excrete a slime that helps to protect them from predators and helps them to move around more easily. Slugs are hermaphrodites, meaning each slug has both male and female reproductive organs.

Chickens are a type of bird that is commonly kept as a pet or for farm purposes. They are known for their egg-laying abilities and their tasty meat. Chickens typically eat insects, seeds, and plants.

When left to their own devices, they will often peck at and eat leafy greens, berries, and other fruits and vegetables. They can also destroy a garden by scratching up the soil in search of food.

The fall armyworm is a destructive pest that feeds on a wide variety of garden plants, including tomatoes, lettuce, and peppers. While the larvae are the most damaging stage, adult armyworms can also do significant damage to crops.

In addition to eating the leaves of plants, they can also bore into fruits and vegetables, causing them to rot. Once they are done feeding, caterpillars pupate and emerge as moths.

Voles are small, rodent-like mammals that can wreak havoc on gardens and crops. Although they are often mistaken for mice, voles are actually more closely related to hamsters and lemmings. These furry little creatures are either brown or gray in color, and they have short legs and bodies.

They typically eat vegetation that is found close to the ground, including roots, tubers, bulbs, grasses, and herbs. Voles are also known to eat the bark of young trees. They can eat up to 60% of their body weight in a single day and reproduce quickly, with females giving birth to up to ten litters of baby voles per year.

Raccoons are medium-sized mammals that are found in North and Central America. These creatures are easily recognizable by their black mask. Raccoons are omnivores, which means that they eat both plants and animals. In the wild, they typically eat fruits, nuts, and small animals.

However, they will eat just about anything else they can get their hands on, including garbage. Raccoons are known to be particularly fond of sweet corn and often raid gardens in search of this tasty treat.

These birds are particularly fond of fruits and vegetables, and they will often raid gardens in search of a meal. House sparrows compete with other birds for food and can also be a nuisance because of their loud chirping.

Goats are herbivorous mammals that are closely related to sheep. These creatures have been domesticated for thousands of years, and they are often used for their milk, meat, and fiber.

Goats are known to eat just about anything, including plants, fruits, and vegetables. They will also eat tree bark and twigs. In some cases, goats can even be used to control the growth of invasive plants. However, they can also do a lot of damage to gardens and crops if they are not properly supervised.