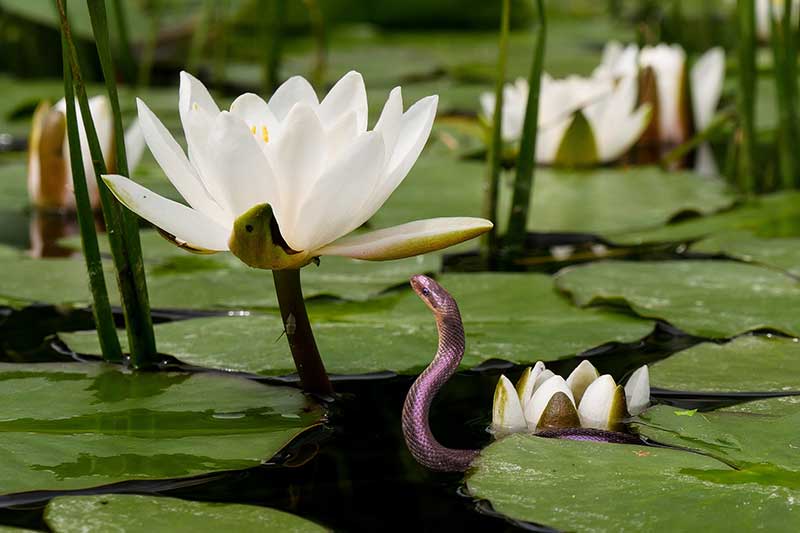 Water snakes can be either semi-aquatic or aquatic. Some species can be just as happy on land as in the water, while others really only live in the water. All snakes can swim, but only a few can be considered water snakes.

The midland water snake mainly lives in the piedmont regions of North Carolina. It’s especially fond of river valleys and coastal regions. Their main prey items are frogs, fish, and other snakes. Their coloration is very similar to the copperhead and the cottonmouth, so they’re often mistaken for these two species.

Midland water snakes are non-venomous and kill their prey with constriction. They often mimic the behaviors of venomous cottonmouths, though, because their similar color patterns can fool potential predators into thinking they’re more dangerous than they really are.

The banded water snake inhabits the swamps, rivers and lakes of the coastal plain, and is closely related to the midland water snake. In fact, they sometimes interbreed. Although they are harmless and non-venomous, they have a wide, flat head and dark coloration which makes them look very similar to a cottonmouth, a species with which they often share habitat.

Like the midland water snake, the banded water snake favors frogs and fish for prey. Banded water snakes can sometimes behave aggressively, counting on their venomous appearance to deter potential predators. This aggressive behavior is likely the source of the many myths about cottonmouth snakes, which actually tend to be quite reclusive.

Brown Water Snakes are one of the larger species of water snakes in North Carolina, and prefer large rivers where they can hunt catfish, their favorite prey. It’s a heavy-bodied species with dark brown colors which, much like the banded and midland water snakes, makes it look very similar to the cottonmouth and other venomous snakes.

Brown water snakes often prefer to bask on tree branches over the water rather than on the ground, so they’re a common sight in trees along the riverbank. This habit means that they often end up in people’s boats, as startled snakes try to jump straight from the branch into the water. They aren’t venomous, but they will bite to defend themselves and they have many very sharp teeth. 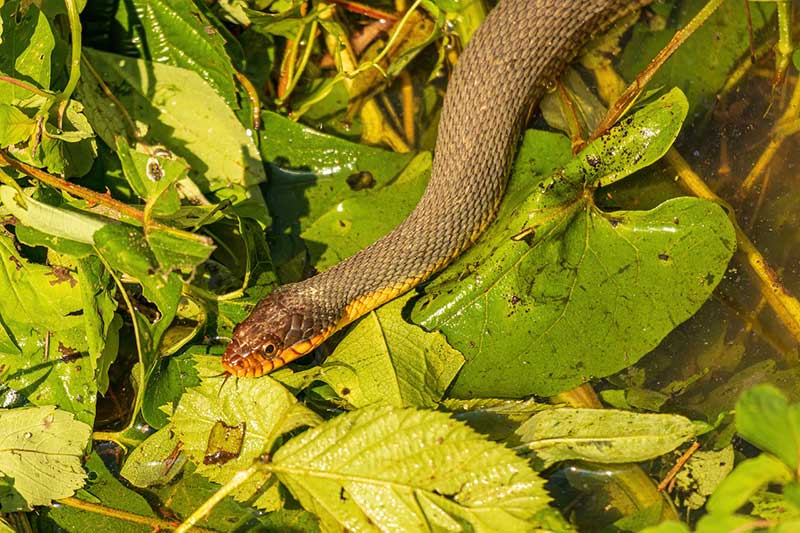 Red-bellied water snakes are named for their bellies, which, while often red, can also be a very plain color. These snakes live in the eastern half of North Carolina, especially in lakes and swamps but also in rivers. They’re unusual for water snakes in that they will frequently travel long distances over land to a new body of water.

They’re also largely nocturnal, preferring to hunt during the night and spending the whole day basking in the sun. Like other water snakes, they will bite repeatedly to defend themselves, even though they aren’t venomous.

The glossy crayfish snake inhabits the coastal plain, where it feasts on crayfish. They have chisel-like teeth specially adapted for eating hard-shelled prey, and they’re one of the most aquatic snake species. In fact, they spend so much time in the water that they’re almost never seen.

These snakes rarely bite, although they will pretend to strike in their trapped and feel defensive. They’re small and shy, and prefer to run into the water rather than confront a predator.

These small, highly-aquatic snakes live mainly in the western half of the snake. These snakes feed mainly on crayfish that have just molted, which makes them very soft, and appear unable to eat hard-shelled crayfish.

Unlike the glossy crayfish snake, the queen snake is not especially secretive, and can frequently be found on the water’s edge basking in the sun. It’s very small, though, so it can be hard to spot.

The black swamp snake is strikingly beautiful, with a deep black back and sides and a vivid red belly. Probably the smallest water snakes in North Carolina, they live mainly in the swamps along the coastal plains of the state. Although these snakes can also live in the shallow saltwater bays. They really prefer heavily vegetated wetlands with little to no fish in them, which tend to have high amphibian populations.

These snakes are highly aquatic and rarely seen, and they eat many different types of amphibian. Their favorite food, though, appears to be aquatic salamanders. They are uniquely in their ability to aestivate (a form of extended hibernation) during droughts, which helps them survive these events better than other types of water snake.

Eastern garter snakes live throughout NC, and are one of the most common snakes in North Carolina and the Eastern United States. They almost always have three distinct yellow stripes running the length of their body, which makes them easy to identify. These snakes are only semi aquatic, living near the water and sometimes hunting in it. They like moist, grassy environments.

You may also like:  Whales in Maine - 4 Common Species to Look for

They have a varied diet that includes small lizards, frogs, tadpoles, and insects as well as fish. Garter snakes give birth to live young, unlike most snakes.

Ribbon snakes are a species of garter snake, so they have the characteristic three yellow stripes and are often confused for the Eastern garter snake. They can be found throughout North Carolina, except for the western tip of the state.

These semi aquatic snakes prefer to live at the edges of lakes and bogs, and become more common the closer you get to the coast. Small fish and amphibians are their favorite foods, so they can often be seen swimming in the water close to the shore as they hunt.

These beautiful snakes have a distinctive red and black striping pattern on their bellies. They’re semiaquatic and mainly inhabit the eastern portion of the state, especially coastal areas. They can live in fresh, brackish, and salt water and are often found in both wetlands and bays.

Most of the time, these snakes are hidden in underwater vegetation, but they’ll travel long distances over land between bodies of water. Giant salamanders are their favorite prey.

Rainbow snakes are black with longitudinal red stripes on their back, and have red bellies with rows of black spots. These highly aquatic snakes favor the eastern half of North Carolina and live in cypress swamps, streams and rivers.

They are commonly known as eel moccasins, because they eat almost nothing except freshwater eels. These snakes rarely leave the water, not even to bask, which makes it difficult and rare to see one in the wild.

Copperheads are venomous snakes that live in every part of North Carolina, and are in fact one of the most common and widespread snakes in North America. They have distinctive, light brown and tan colorations with an hourglass-like pattern on their backs. The head is distinctly triangular. Though they aren’t actual water snakes, they are semi-aquatic.

Copperheads are more common in woodlands, but they do sometimes live in habitats like wetlands and river valleys. They prefer to eat rodents and other small animals. Copperheads account for over 90% of the snakebites in North Carolina, but their bite is rarely life-threatening.

It is quite painful though and should always be treated as serious. Occasionally, these bites occur when a person steps on a wild copperhead, but a large percentage (if not an outright majority) of bites occur when people are trying to handle or kill one.

When you think of water snakes, you likely think of this one. Cottonmouths are infamous, and have an undeserved reputation as aggressive snakes. They never venture far from the water, and are often seen swimming making them the most common, venomous water snakes in North Carolina.

You may also like:  Water Snakes in Missouri (8 Species With Pictures)

Water Moccasins are dark brown or black on top and the same on their bellies. Younger snakes can have a light pattern on their backs but tend to get darker as they mature. They feed on fish, amphibians, and reptiles like other water snakes, but these snakes are highly venomous and a bite can be fatal if not treated quickly. If you see one or aren’t sure what species it is, when in doubt you should always avoid snakes just to be safe.