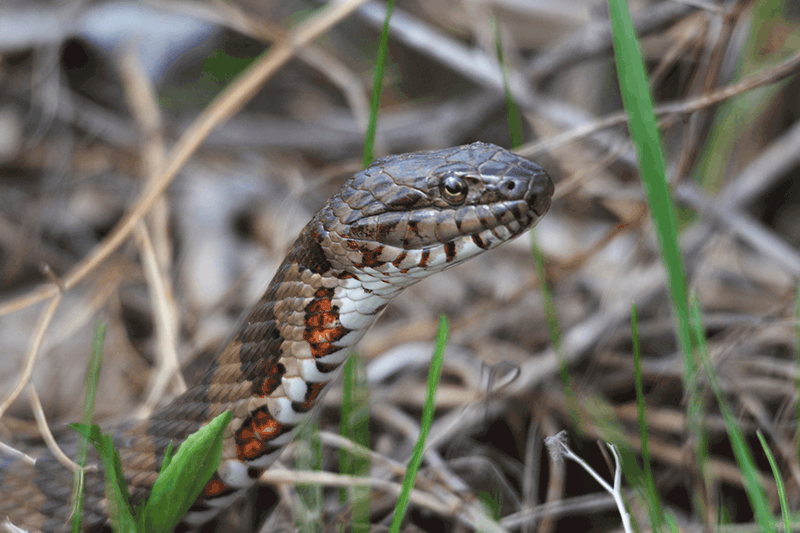 Some of the species to make this list are semi-aquatic, meaning they may spend equal parts on land and in the water. All snakes are able to swim if they like, however some are certainly more drawn to water than others.

6 Types of Water snakes in Pennsylvania

There are six snakes that can be classified as at least aquatic or semi-aquatic in Pennsylvania which are the: Northern Water snake, Northern Rough Greensnake, Queensnake, Ribbonsnake, Northern Copperhead, and Kirtland’s Snake.

The Northern Water snake is abundant in aquatic environments all over Pennsylvania. Unfortunate for these guys, they are often killed out of fear because they share similar coloration and patterning with the venomous Copperhead. While they are known to show some attitude when threatened, they are harmless.

They are widely distributed throughout Pennsylvania and are found in slow-moving, fresh-water bodies such as streams, lakes, ponds, marshes and swamps. They feed on small fish, amphibians and even crayfish.

The Northern Rough Greensnake is more semi-aquatic than aquatic and splits it’s time between time on land and time in the water. They prefer moist habitats like marshes, wet meadows, and along the edges of lakes or streams.

Northern Rough Greensnakes are endangered in Pennsylvania and are currently found in a single county, Chester County in the Southeastern portion of the state. These snakes may be confused with Smooth Greensnakes, however Smooth Greensnakes tend to prefer drier habitats.

Queensnakes almost exclusively spend their time in aquatic habitats. They tend to be found anywhere where there is an ample supply of crayfish- their main diet and are found in slow to quick moving streams and rivers, lakes or ponds.

Queensnakes occur in two disjunct (or separated) populations in the Western and Southeastern part of the state. Queensnakes are very susceptible to water pollution, so clean water sources are key in their habitat selection.

Ribbon Snakes are found in wooded or rocky habitats that also have a permanent water source. They will often bask on branches or in bushes around water sources and drop into the water in the face of a threat to get away quickly.

The Northern Copperhead is one of three venomous snakes found in Pennsylvania. They are semi-aquatic and do not need a water source to live in or near, however they are very commonly found near or in water along the edges of streams or in swampy areas.

Northern Copperheads are widely distributed throughout Pennsylvania and can be found in the lower two-thirds of the state. While they are often found near water, they also have been known to inhabit rocky or hilly areas and are sometimes referred to as the “upland moccasin”.

There is uncertainty whether or not there are still populations of Kirtland’s Snakes in Pennsylvania as there hasn’t been an observation recorded in the state for nearly 60 years. But historically they have been known to occur in the Western portion of the state West of the Allegheny mountains.

Kirtland’s Snakes are actually semi-aquatic and semi-fossorial. They may be found along streams, wetlands, ponds, wet prairies and in crayfish burrows. However, being semi-fossorial, they also spend time underground.

Due to the rarity of this species, if you spot one the folks from PA Herps (a resource for identifying reptiles in Pennsylvania) ask that you contact them to record this rare and secretive species.

Recap of water snakes in PA

Pennsylvania is home to mainly terrestrial (land dwelling) snakes, but as mentioned in this article there are a handful that can be found in water bodies throughout Pennsylvania.

Only one venomous snake makes this list of water snakes in PA, meaning that most of the water snakes you may encounter are in fact harmless. That being said, always proceed with caution when you encounter a snake in the case that it is venomous.