Copperheads are a venomous pit-viper native to North America. In fact, they are one of the most common venomous snakes in many states where venomous snakes are found. Copperheads tend to have hourglass shaped figures along their back and their scales come in shades of browns, blacks, and rust colored oranges. In this article we’ll look at some snakes that look at Copperheads.

Some of these snakes to make the list may share the patterns, colors, or both with Copperheads which can lead people that are unfamiliar with snakes to misidentify them. Remember, the worst is usually assumed about a snake. In some cases the snake doesn’t even resemble a copperhead, and is still mistaken for one by people who are uninformed.

In any case though, if you believe you’ve found a venomous snake the most important thing you can do is give it distance. 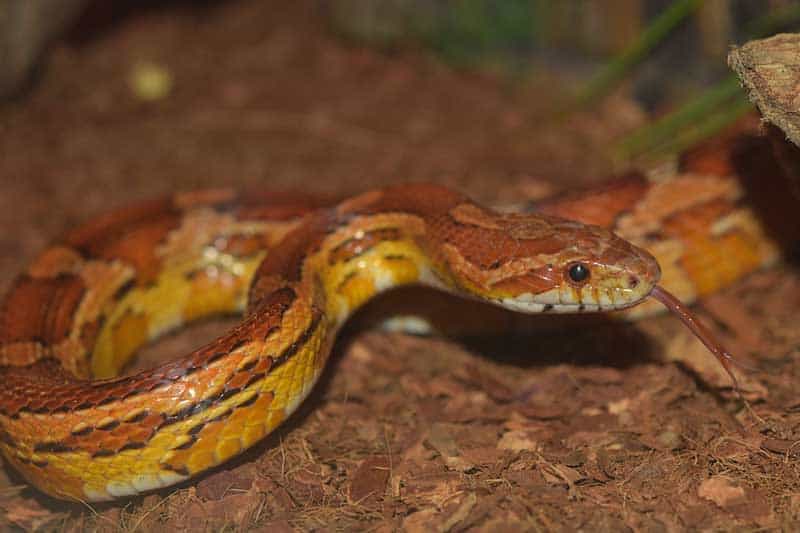 Corn Snakes come in several color variations, but one of their color variations of rust colored oranges and reds together can give them a similar appearance to the venomous Copperhead.

This coloration is probably the only thing that makes them look like a Copperhead however, as Corn Snakes have a very different shaped head and body. But for those unfamiliar with snakes, a Corn Snake may be indistinguishable to the Copperhead.

The Eastern Hognose is technically armed with venom, perfect for subduing small prey items, but they are harmless to humans. Some individuals can share similar coloration with Copperheads and tend to have that banded patterning, much like Copperheads.

Eastern Hognoses get their name from their pig-like snout. When threatened, Hognose snakes may flatter their body, giving them a false-hood, almost like a cobra. If this defense display doesn’t work, then Hognoses may roll over and play dead!

The patterning of the Diamondback Watersnake can resemble the reticulated pattern of the Copperhead.

Another watersnake on the list, the Banded Watersnake is a harmless snake that really tends to resemble the venomous Copperhead. Their coloration is very similar to most Copperheads, with hues of oranges, browns and reds. Not only that, but their patterning is similar to Copperheads causing confusion for people that come across them. But like many of the snakes on the list, these snakes are harmless and tend to be very docile.

This snake makes the list of snakes that can look like Copperheads, but with an exception. Black Racers are in fact Black, and most of the time patternless. However, juvenile or young Black Racers look entirely different from adults and it is the juvenile Black Racer that can resemble a Copperhead.

Juvenile Black Racers are obviously smaller than adults, but they also have reddish-brown markings down their back, which to a snake novice could look similar to markings of a Copperhead. 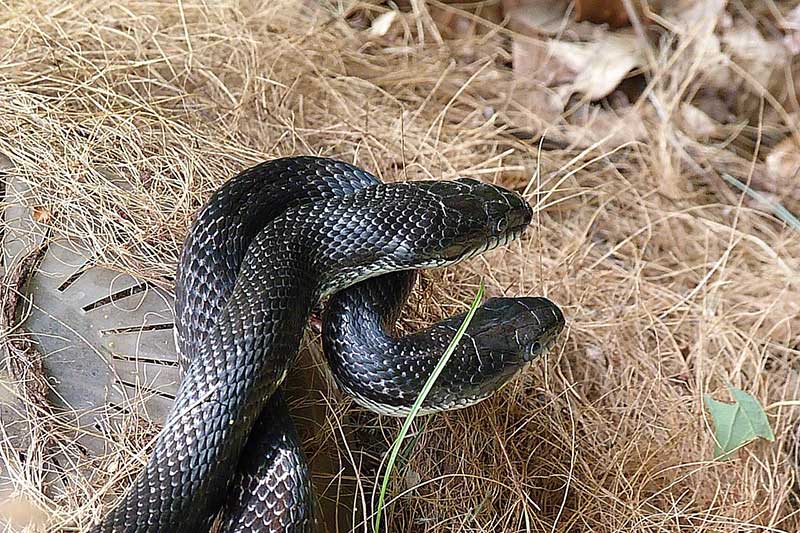 Black rat snakes are both terrestrial and arboreal meaning they can be found slithering around on the ground and up in the trees. They are very common in the United States and are found in virtually all habitat types. Even though they do not look much like one to someone who know better, they are occasionally mistaken for venomous snakes like copperheads.

It’s always advisable to get familiar with your local wildlife, especially when you live in an area with venomous or other potentially dangerous animals. The number of snakes on this list that are non-venomous but look like the venomous Copperhead speaks to the importance of being able to identify wildlife.

You may also like:  Water Snakes in Pennsylvania (6 Different Species)