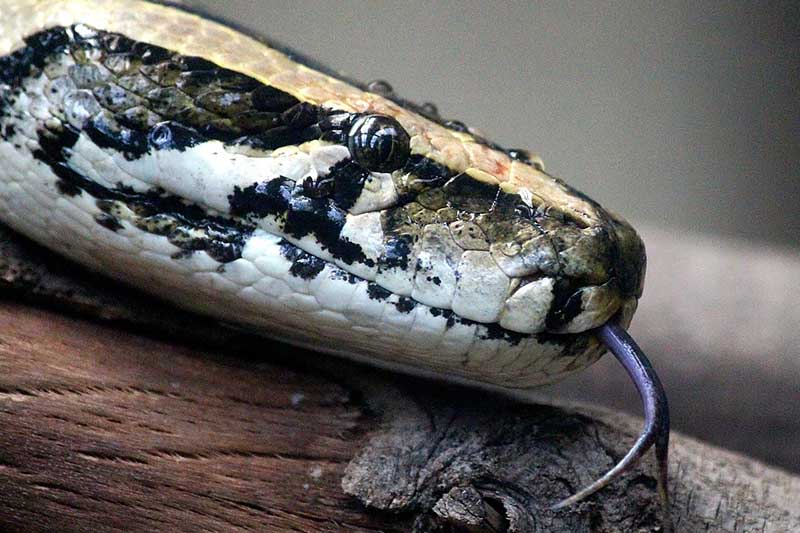 Snakes make up a unique group of animals, so it’s no surprise that snakes perceive their surroundings differently than other animals. Snakes have adapted senses that allow them to interpret signals from their surroundings in their own special way. In this article we’ll answer the question: “how do snakes smell?”.

Like for many other animals, snakes have a very strong sense of smell. Sense of smell is one of the most important senses for snakes. Snakes have incredible senses of smell that help them navigate their environment, detect prey, and can even tell them when threats are near.

How do snakes smell?

Snakes use their tongue and a sensory organ to smell. Snakes essentially smell by using their forked tongue to pick up scent particles in the environment. Then, the snake brings its tongue back into its mouth where it makes contact with the Jacobson’s organ.

So, while the proper and more accurate term for a snake’s sense of smell is chemoreception, for the purpose of this article we will keep things consistent and use the term sense of smell.

Do snakes smell with their nose?

While snakes do have nostrils, they do not use them to smell. Instead, the nose or nostrils of a snake are more important for breathing.

Do snakes have a good sense of smell?

Yes! Snakes have a very strong sense of smell. In general, snakes don’t tend to have amazing eye-sight or hearing, so this means that a lot of the work falls to the other senses like smell. Interestingly enough, blind people or people that are hard of hearing or deaf often also report an increased sense of smell.

Why do snakes flick their tongues? 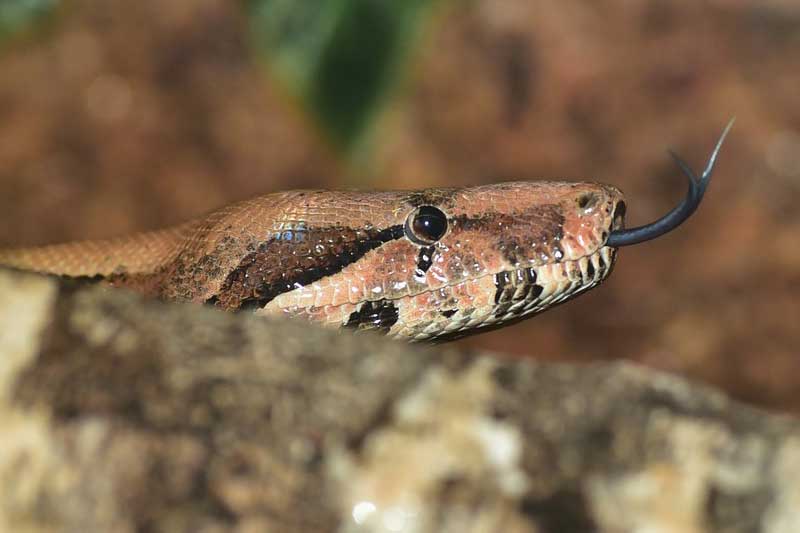 When snakes flick their tongues quickly, it is most likely because there is something of interest nearby. This allows them to pick up more scent particles and signals from their environment at a much faster rate.

How do snakes smell with their tongue?

Snakes have forked tongues that essentially act as one long, sticky appendage that they use to pick up scent particles in the air. After sticking their tongue out, snakes will bring it into their mouth so the scent particles can make contact with the Jacobson’s organ.

Because snake tongues are forked or split, it helps for the snake to tell which direction a smell is coming from. This is helpful to the snake because it can let it know if a prey item or even a predator is to their right or their left.

How far can snakes pick up a scent?

There really isn’t much information about just how far a snake can detect a sense or smell. It most likely depends on an array of factors, like how many or how concentrated these chemical stimuli (scent particles) are and environmental factors like wind and/or humidity.

But scientists do know that sense of smell or chemoreception is very strong in snakes and in some cases, snakes can detect certain stimuli from meters away at least.

Snakes, like many other animals are particularly interested in two different biological needs: food and reproduction. So, if there are fresh scents of prey items or fresh scents of a particular mate in the air, this could attract the attention of a snake near-by.

That being said, snakes don’t typically mate year-round and this means that snakes don’t give off certain chemical signals that are used to attract mates.

If you are close enough to a snake, it should be able to smell you without any problems. But don’t worry, snakes aren’t smelling humans because they think you’re their next meal, instead they may start to rapidly tongue flick because they sense a threat (you) in attempt to remain alert.

What smells do snakes hate?

While the science on “snake deterrents” is shaky, people swear that certain scents are great for keeping snakes out of your yard. Keep in mind, using these scents or products do not guarantee that snakes will stay away from your yard, but it’s worth a try! Some of these smells include:

No, while snakes can certainly smell humans that are afraid of them, they don’t smell fear! Snakes have no way of knowing if the animals or humans around them are afraid or not. So this is actually a myth.

Most people know that snakes are obviously quite unique and very different from their mammalian counterparts, but most people probably don’t realize that snakes have an incredible sense of smell! Their sense of smell is absolutely necessary for them to interpret and navigate their environment.

For snakes, a good sense of smell doesn’t just tell them when something tasty is near-by, it also helps to warn them of threats in the area and can help them track down a potential mate. A good sense of smell helps to make up for some of their other senses that lack- like hearing and sometimes sight.