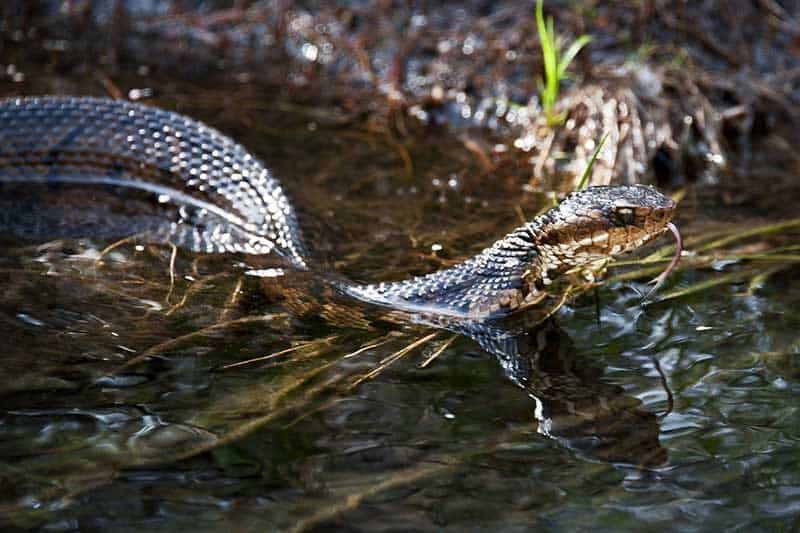 Water snakes are snakes that live in or near water. These aquatic, or often semi-aquatic creatures, thrive in Texas. They have many choices for water habitats to live in throughout all areas of this incredibly large state. As you may have guessed, in this article we’re talking about the water snakes in Texas.

Texas is the largest state in the continental United States with 268,597 square miles, second only to Alaska. The state of Texas is home to an estimated 7,000 lakes, 3,700 named streams, 15 major rivers, 191,00 miles of waterways, and 7.7 million acres of wetlands.

Add all of that together and you get a massive water snake habitat!

Keep reading to learn about some of the most common water snakes you might encounter while visiting Texas!

Cottonmouths are the only venomous water snakes in North America! These snakes are incredibly strong swimmers and are considered semi-aquatic. They can thrive in and outside of water.

Cottonmouths can be found in a lot of different states in America. They’re most common throughout the southeastern, southern, and central parts of the United States. These snakes can mainly be found near bodies of water like creeks, marshes, and swamps.

Green Water Snakes are creatures that enjoy living in bayous, swamps, marshes, and any other form of permanent bodies of water. While you might be able to find them near all types of water, they do prefer being near water with little current and a lot of vegetation. Because of their desire to live near water at all times, their diet mainly consists of fish, frogs, and crayfish.

These kinds of snakes can specifically be found in East Texas. Outside of Texas they are common in Louisiana, as well as Coastal South Carolina to Florida, Eastern Arkansas, and Southern Illinois.

Green Water Snakes are mainly nocturnal. While they can emit a foul odor when they are being threatened by predators (like most other water snakes), they surprisingly don’t do this in many situations like other snakes.

Southern Water Snakes can be found in their habitats in the water, whether it be in lakes, streams, ponds, or marshes. These kinds of snakes are mostly aquatic, so they tend to only eat fish and frogs. Interestingly, these snakes enjoy sunning — though they tend to only hunt at night or after heavy rainfall when they can easily get frogs!

While Southern Water Snakes (also called Banded Water Snakes) can be found in a variety of areas around the United States (from North Carolina to the Florida Keys, and then oddly in areas of Illinois), they can be found specifically in eastern and western Texas.

Brazos Water Snakes are completely native to only Central Texas, and they are typically only found in the Brazos River System. These types of unique snakes prefer living in the rocky areas right next to the Brazos River. As these snakes are only located in one specific area in Texas, they are considered to be a near-threatened species in Texas.

Not too much is known about these snakes, compared to other reptiles in the area. However, they are mostly aquatic snakes, though they can live on land near water easily. They live off of fish and frogs and are commonly active in the day.

You can learn more about the Brazos water snake here.

While some snakes are native to only certain states, the Plain-Bellied Water Snake can be found in every single southeastern state in the United States! They can be found throughout most of the state, and are one of the most common water snakes in Texas.

You’ll always be able to find these snakes near permanent water sources, as they’re mostly aquatic creatures. They’ll likely be near any lakes, ponds, streams, or any other reliable source of permanent water.

Plain-Bellied Water Snakes differ from other common water snakes, as they will actually travel away from water if they are threatened, or during very hot, humid weather. While they are aquatic and mainly eat fish and frogs, these snakes have no issue spending time on land and can often be seen on the banks by water, rather than in the water.

These snakes tend to only be the most active during the warmer days of the year, and they thrive during the summer. During the hottest days, they will be active both during the day and at night!

The Concho Water Snake is also another snake completely native to Texas! These snakes are only found in west-central Texas in the Colorado and Concho river systems. Because they are only native to this specific area, these snakes are considered to be a threatened species.

Concho Water Snakes aren’t any different from other forms of water snakes. They are mostly aquatic and they prefer living near permanent bodies of water, only the Colorado and Concho river systems.

These snakes are mainly active during the day. Their preferred habitat is along the fast-flowing water upon rocks or rocky cliffs that are incredibly close to the water. However, they can also be found on the shorelines or among the vegetation of ponds.

Diamondback Water Snakes can be found throughout the central United States and northern Mexico. In Texas, it can be found in west-central to south-central Texas.

These snakes are incredibly common water snakes. They tend to enjoy living in habitats near streams, swamps, ponds, and any form of permanent bodies of water that have slow-moving currents.

Often, Diamondback Water Snakes can be found hanging from trees and dipping their head in the water to catch their prey. They can also often be found simply basking on tree branches in the sunlight! However, if anything scares them or predators get too close, they’ll hop back into the water and disappear from sight.

You can find common water snakes in Texas as well as throughout many other central and eastern states. In Texas, they can be found mainly in the central area, but can also spread throughout the state occasionally.

The Common Water Snake is also called the Northern Water Snake or Banded Water Snake. These snakes are active during the day and the night, and their diet tends to consist of fish, frogs, worms, small birds, mammals, and more.

While a water snake, this snake can often be seen basking on the shoreline by the edge of the water. They also tend to hunt other creatures outside of the water when they want to!

Texas Indigo Snakes are never too far from water. They prefer habitats that consist of dry grasslands near ponds or other bodies of water.

However, these types of snakes can also exist in open grasslands in some circumstances. Mostly, these snakes highly prefer being near a permanent source of water and will burrow in old animal habitats.

Texas Indigo Snakes are considered to be very large, nonvenomous snakes that feed off of small animals, other snakes, frogs, and lizards. In the U.S. they are only found in Southern Texas, but their range does extend into Mexico.

The eastern indigo snake (image above), a cousin to the Texas indigo, is found throughout Florida, Southern Georgia, Southern Alabama, and parts of Southern Mississippi. Both species are similar in appearance.

While Texas Rat Snakes don’t solely exist in water habitats, you can find some in swamps and near different forms of bodies of water. So they’re really only partially semi-aquatic… but they’re quite common in certain parts of Texas, so we added them to the list anyway. When not in swamps, these snakes prefer living in forests, canyons, and farmlands. They can basically live in anything from arid to wet habitats.

Texas Rat Snakes are constrictors. This means they suffocate their food (small mammals, birds, snakes) before eating them. These snakes are specifically found in east-central Texas, though they can also be found in south-central Louisiana.

You may also like:  16 Awesome Facts About Marine Iguanas (With Pictures)

Texas Garter Snakes aren’t incredibly uncommon, even in Texas where they’re native reptiles. They are considered a subspecies of the common Garter Snake. These snakes are mainly found in central Texas, though small amounts can also be found in Kansas and South Dakota.

Because these snakes are so uncommon, they often aren’t found in large groups together. They prefer habitats that are near permanent bodies of water, though they can be found in a variety of different areas. However, they’ll try to stick close to the water and can be found living in damp soil or stream-side areas often.

While uncommon, Texas Garter Snakes are completely harmless! They aren’t known to be aggressive in any regard, though some younger snakes may attack if threatened. More often than not, they’ll just try to escape from the dangerous situation.