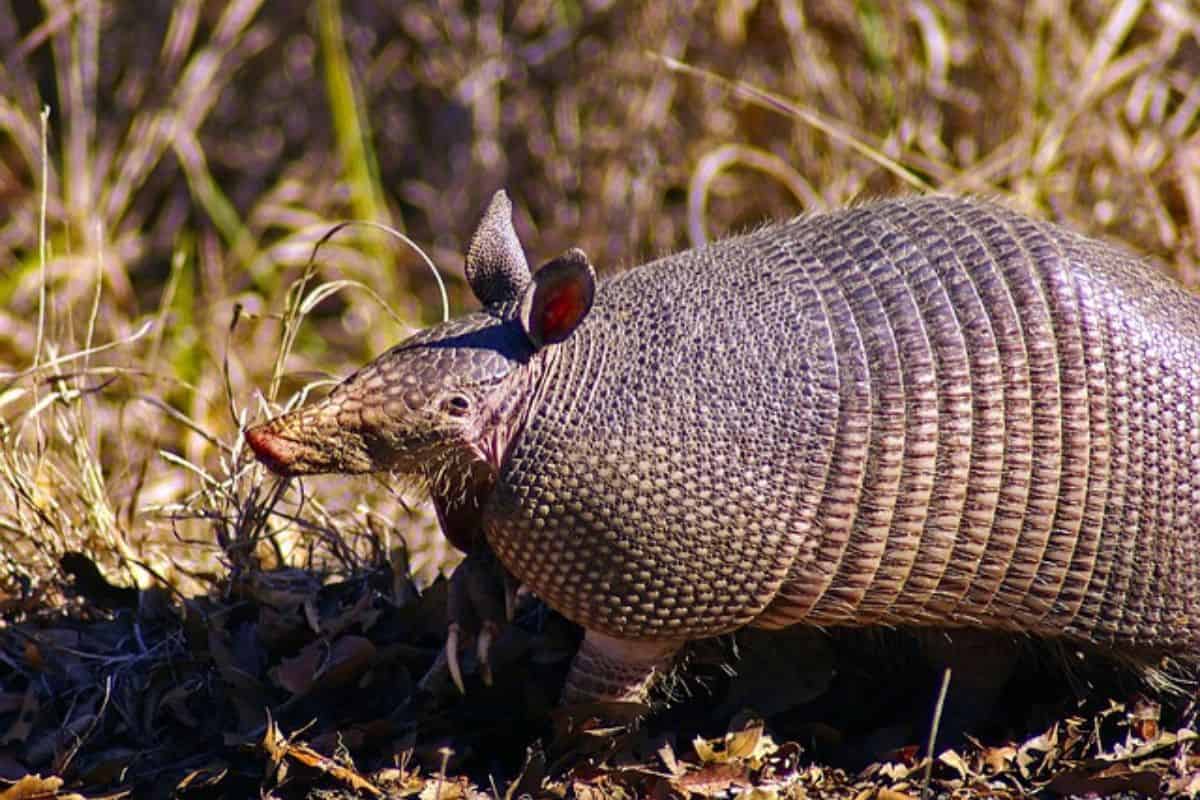 The Lone Star State of Texas is home to unique wildlife, from small reptiles to large mammals. Many of these animals are just as interesting as the state they live in. One of the most common animals you may come across in Texas is the nine-banded armadillo.

Nine-banded armadillos are a common animal found throughout several regions in North America and the only kind of armadillos known to live in the United States.

These facts about the nine-banded armadillo found in Texas offer insight into this one-of-a-kind small mammal.

The scientific name for the nine-banded armadillo is Dasypus novemcinctus Linnaeus. The most common name for these mammals is an armadillo, no matter what part of the country they are found in. They also fall under the order Cingulata.

The nine-banded armadillo seen wandering throughout Texas has a distinct appearance, unlike any other mammal found in the state. They have a protective armor-like shell that acts as a great defense against predators. Even though these animals have nine-banded in their names, they can have anywhere from 7 to 11 bands.

They have a bony appearance, and as adults can reach up to two and a half feet long. Armadillos can weigh about 12 pounds. For the most part, these animals are about the same size as a cat. Strong and sharp claws help them with foraging for food and digging.

3. Where They Are Found

Nine-banded armadillos can be found throughout the entire state, but do not appear in the Trans-Pecos. They will use their claws to dig dens to burrow in and can be found in urban and rural areas.

Armadillos often appear in residential areas and are often spotted in the yards and gardens of Texans. These mammals are mostly nocturnal, and more likely to be seen at night.

4. The State Mammal of Texas

The nine-banded armadillo is the small mammal of Texas, an animal frequently associated with the state. Many people who visit the Lone Star State hope to see one of these interesting animals during their visit.

While it is believed all armadillos can roll up, only two species can, and the nine-banded armadillo is not one of them. Their armor is still protective against predators, and they will also jump when scared. This jump is meant to scare whatever is threatening them, and give the armadillo time to make an escape.

Armadillos have a vast diet, foraging across the Texas landscape for hundreds of different food options. These mammals mostly feed on insects, such as grub worms, snails, spiders, scorpions, beetles, and wasps. Sometimes they may also eat small frogs, lizards, or eggs. A small percentage of their diet consists of fruit and seeds.

7. Predators of Armadillos in Texas

There are several other animals that will prey on armadillos regularly in Texas. Many of these animals are also nocturnal and will hunt armadillos at night when they are most active.

Common predators of the nine-banded armadillo include:

While armadillos have protective armor, this does not make them invincible to predators. When they are young, these mammals don’t have a protective shell yet and are more prone to being killed.

It takes around four weeks from birth for their armor to be fully developed. Since armadillos have such poor eyesight, they have to rely on their other senses to keep them safe from predators.

Female armadillos will give birth to live young and have four babies at a time. Even though young armadillos are born life, they do not have their thick protective armor at first.

It takes a few weeks for their armor to get strong enough, and until then they will stay with their mothers. Baby armadillos have a shell that is about as thick as a human fingernail.

9. Swimming and Holding Their Breath

Armadillos are actually pretty good swimmers, even if it doesn’t look like they would be. These mammals get through creeks and ponds by sinking to the bottom and walking across.

They are able to do this because of how long they can hold their breath, which is up to six minutes. When armadillos do swim instead of walking across the bottom, they are quite good at it. They will swallow air to increase buoyancy, and help them float through the water.

Nine-banded armadillos in Texas are known to spend a lot of their time sleeping. These small mammals can sleep for up to 16 hours each day, and this will usually be during the daytime.

Armadillos are common across most of Texas, and because of how much they burrow and forage, they are considered a pest or nuisance in many residential areas.

They are known to destroy lawns, gardens, or flower beds in their search for food or shelter. It is hard for Texans to keep these mammals away because of how common they are in the state.

Even if one is trapped and removed, it likely won’t take long for another armadillo to show up in its place. For this reason, Texas residents have to try and deter armadillos from their yards altogether.

Nine-banded armadillos are one of the most common mammals in all of Texas and have even been named the small mammal of the state. These are interesting animals, with many unique abilities that not everyone has heard of.