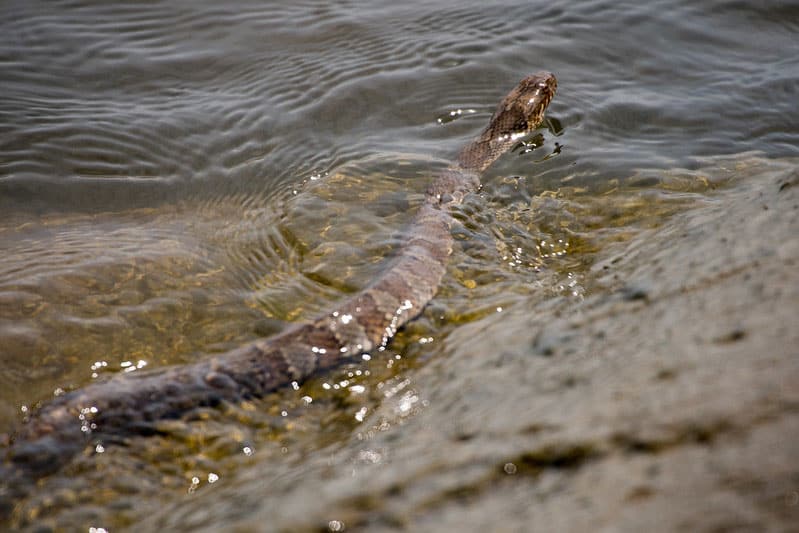 With its many bodies of water like the Lake of the Ozarks, the Mississippi River, and the Missouri River, Missouri makes a comfortable home for many different species of water-dwelling creatures, including snakes. Even though all snakes swim, many live on land most of the time. So in this article we’re going to look particularly at the water snakes in Missouri.

I’ll show you a picture for each one to help identify it in the wild, as well as give you some facts and helpful info about each species. I’ll also tell you if the snake is venomous or not.

I hope you find this list of Missouri water snakes helpful!

8 types of water snakes in Missouri

Northern Water Snakes live in habitats near any body of water like lakes, rivers, streams, and ponds. Here they find an abundance of food such as fish, frogs, salamanders, and other amphibians. They are often mistaken for Cottonmouths even though they are non-venomous and harmless.

Diamondback Water Snakes are some of the largest water snakes in Missouri with some adults reaching over 5 ft in length. They get their name from the diamond pattern on their backs. They are mostly dark in color and some may have a yellow belly.

These snakes are found near slow moving rivers and streams, swamps, lakes, and ponds. Like the Northern Water Snake, Diamondback Water Snakes feed on aquatic life here such as fish and amphibians.

The Plain-bellied Water Snake is gray, greenish gray, or brownish black on top and yellow or orangish-yellow on bottom. They have little to no pattern. These snakes are also non-venomous, live near bodies of water, and feed on fish and amphibians.

You may also like:  Owls in Vermont (9 Species With Pictures)

One of three recognized subspecies of the Southern Water Snake, Nerodia fasciata, the Broad-banded Water Snake is limited to the southeast corner of Missouri according to this range map.

They are one of the smaller water snakes in Missouri, only reaching about 2 or 3 feet in length. The large, irregular-shaped bands on their back are typically reddish-brown or black separated by gray or yellow making them quite unique. Though unfortunately like other water snakes they are still commonly mistaken for Water Moccasins and needlessly killed.

They are non-venomous, though like other water snakes Broad-banded Water Snakes can emit a strong smelling musk from the base of their tail. They will also defend themselves fiercely if they feel threatened by you.

Graham’s Crayfish Snakes are the smallest water snakes in Missouri with some adult snakes only reaching about a foot and a half. They get their name because not only are freshly molted crayfish their favorite food, but they also live in and spend their winters in abandoned crayfish burrows.

They’re typically brown or yellowish-brown in color and are found in most of Missouri, except for parts of Central Missouri and the Ozarks.

Probably among the least common water snakes in Missouri, the Mississippi Green Water Snake has a range restricted to the southeastern corner of the state. They are mostly greenish-brown in color with yellow half-moon shaped markings on their backs. Mostly due to habitat loss, they have an endangered status in Missouri.

The Mississippi Green Water Snake prefers living in swamps where it feeds on frogs, fish, salamanders, crayfish, and other swamp life.

Like several other species of water snakes in Missouri, this snake is found only in Southeastern Missouri. The Western Mud Snake has a shiny black back but it’s belly is brightly colored red and reddish-pink.

The Western Cottonmouth, which one of 3 subspecies of the Water Moccasin (Agkistrodon piscivorus), is one of only 5 venomous snakes found in the state of Missouri. They are found in Southern and Southeastern Missouri, and near the Ozark region of the state.

Water Moccasins are dark brown or black on top and the same on their bellies. Younger snakes can have a light pattern on their backs but tend to get darker as they mature. They feed on fish, amphibians, and reptiles like other water snakes, but these snakes are highly venomous and a bite can be fatal if not treated quickly. If you see one or aren’t sure what species it is, when in doubt you should always avoid snakes just to be safe.

You may also like
Venomous snakes in all 50 U.S. states

Well that about does it for Missouri water snakes. There may be a species I missed, but I think these are the most common ones you’d come across in the state. As you saw, the only venomous one on the list is the last one, the Water Moccasin.

You may also like:  Owls in Minnesota (12 Species With Pictures)

Thanks for reading! Be sure to check out some of my other articles if you enjoy reading about wildlife!