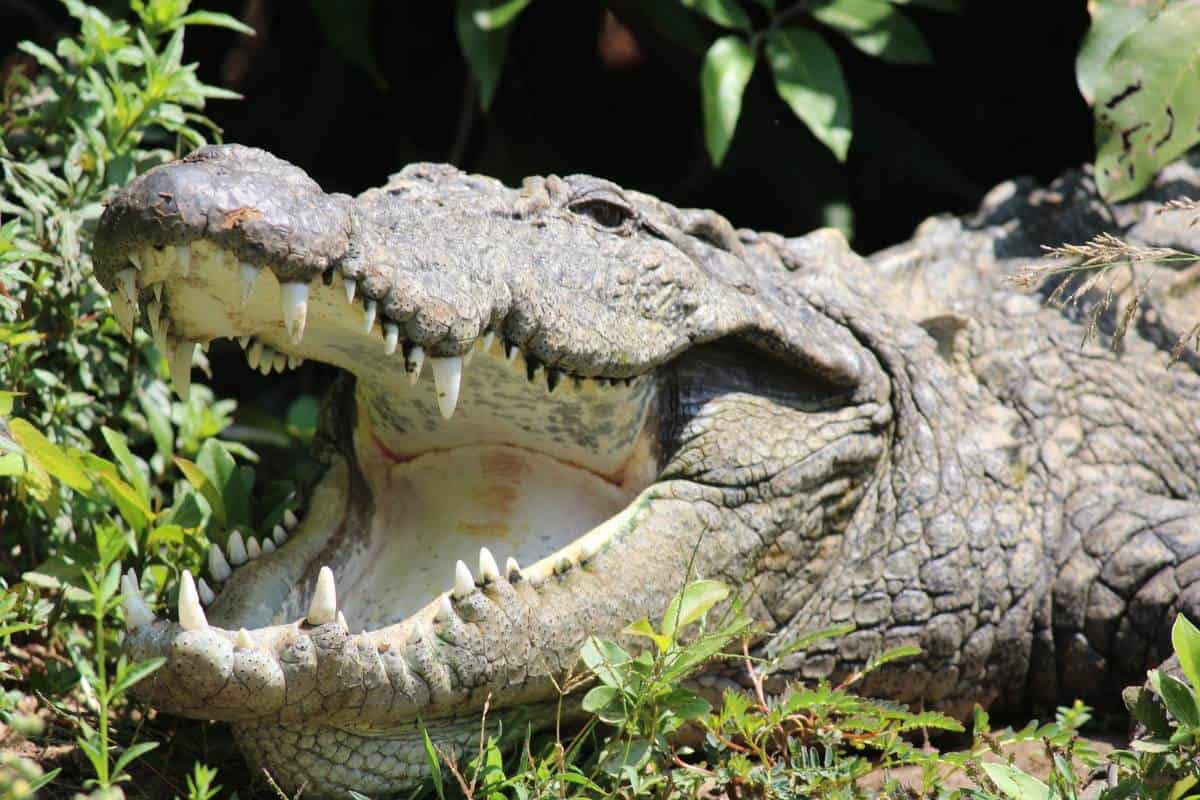 Crocodiles are apex predators, have tried and tested attack strategies, and are even deadly to humans. However, humans do pose a threat to some species of crocodiles. Draining of valuable wetlands and the removal of prey species make it harder for crocodiles to find places to nest and food to eat.

When hunting, crocodiles use their powerful jaws and teeth to dispatch prey with a single bite. But how many teeth does a crocodile have? Read this article to learn more.

How Many Teeth Does a Crocodile have?

Crocodiles that eat mostly fish, such as the Gharial, have more teeth. Omnivorous crocs like the Nile Crocodile and the Saltwater Crocodile have fewer.

Like mammals, crocodiles have heterodont dentition, meaning that they have different types of teeth. Crocodiles’ teeth are conical and pointed, but they grow in different sizes depending on what part of the mouth they are in.

How Many Teeth Do Saltwater Crocodiles Have?

Saltwater Crocodiles normally have 66 teeth at any one time. The teeth are distributed in the mouth as follows:

The teeth can measure up to 5 inches long and are very sharp. The fourth tooth back from the front of both jaws on each side is larger than the other teeth. It’s known as a canine tooth and is visible when the crocodile closes its mouth.

How Strong is a Crocodile Bite?

Other scientists discovered that a Nile Crocodile’s bite force, measured in the wild, was 5,000 lbf, the highest bite force strength recorded of any living animal on Earth. For comparison, even the great white shark’s bite force was just 4,095 lbf.

Male crocodiles have stronger bite forces than females because they are larger and have more musculature behind their jaw muscles. In fact, they can be five or six times the size of females. The average male is six feet longer and 600 pounds heavier than the average female.

How Do Crocodiles Use Their Teeth?

Crocodiles are apex predators which hunt prey in order to survive. They use their teeth to capture prey, support eggs, and forage for the occasional plant meal. The most common use of their teeth is to capture and drag prey.

Crocodiles don’t tear apart their prey like other predators. Instead, they attack from a hidden semi-aquatic position, grab onto a vulnerable part of the animal like its head or belly, and drag it back into the water. If they can’t crush its skull on the first try, they barrel roll, still holding on, until the animal drowns.

The strong teeth in their jaw keep the prey secure so it can’t escape. There are other more peaceful ways that crocodiles use their teeth, though. Females are very nurturing mothers.

She helps her young hatch by rolling the eggs around in her mouth. She also transports her young out of danger by holding them in her slightly open mouth. The teeth act as call bars to prevent them from slipping out and being trampled on or lost in the mud.

Do Crocodiles Run Out of Teeth?

Rarely. Crocodiles have polyphodont teeth; that means that they can replace their teeth during their lifespan if one falls out or decays. They have a succession of three parts to regenerate their teeth.

Successive teeth begin to form under the gumline when the above tooth is still functional. That way, when the tooth is destroyed or grows weak, the young tooth can push up through the gum as soon as possible. Behind the tiny replacement tooth, special cells called odontogenic stem cells grow in the gum tissue.

They are ready to differentiate into teeth cells as soon as the above tooth is lost. The rate of total tooth replacement, that is, the whole mouth being refreshed with new teeth, takes about 20 months. Crocodiles live to be between 35-75 years, so that’s around 45 new sets of teeth in one lifetime.

However, the tooth replacement rate slows down as the crocodile ages. Older crocodiles don’t generate new teeth as quickly as young ones do. This may be a contributing factor to the death of the older lizards, since they can’t secure prey as effectively with fewer teeth.

Do Alligators or Crocodiles Have More Teeth?

On average, alligators have more teeth in their mouth at any one time. One of the most common alligators, the American alligator, has about 74 to 80 teeth. This is more than the Saltwater crocodile, which has just 66.

Another difference between the teeth of alligators and crocodiles is whether they are visible in the jaw when the reptile’s mouth is closed. You can only see the top teeth of an alligator when It closes its mouth.

The teeth on the lower jaw don’t protrude from the mouth like a crocodile’s do. Like crocodiles, alligators have polyphodont teeth that regrow on an as-needed basis.