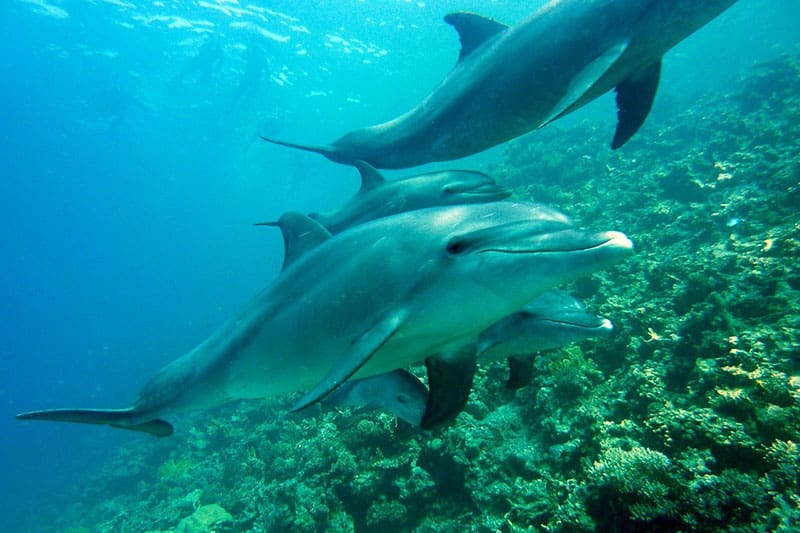 4 Types of marine mammals with examples

Marine mammals are aquatic mammals that depend on ocean ecosystems. These animals can be broken up into four main groups which are the pinnipeds, cetaceans, sirenians, and fissipeds.

The pinniped group includes seals, sea lions and walruses. This group of animals are characterized by being fin-footed, carnivorous and mostly aquatic.

They do their hunting and feeding in the water, but come up onto the shore to sleep, breed, or warm up. Pinnipeds are a very diverse group with 30-40 different species. Globally, they are found in more temperate coastal waters along all seven continents.

Seals fall into the taxonomic family phocidae and are also known as the “true seals”. There are between 15 and 20 species of true seals.

They have very small front flippers compared to other pinnipeds, making them less mobile while on land. Additionally, true seals lack the external ears that can be seen on sea lions. True seals are found almost entirely in polar, subpolar or temperate waters.

Harbor seals are the most widely distributed species of true seal. In North America, they can be found both along the west coast and the east coast north of the Carolinas.

Outside of North America, they can also be found along the temperate coast of Europe and parts of Asia. Harbor seals are known for their puppy-dog like appearance and can often be seen sunning themselves on rocks in a banana like position.

The gray seal overlaps it’s range with the harbor seal but is only found in the northern Atlantic ocean. Gray seals are much larger than Harbor seals with males growing to be up to nearly 700 pounds! Like other seals, gray seals live and breed in colonies along rocky coasts.

Fur seals, also known as sea lions belong to the Otariidae family. There are 15 species of fur seals that occur in the Pacific, Southern, Indian and Atlantic oceans however they are rarely found in the Northern Atlantic.

Fur seals differ from true seals in a few ways; first of all, they have external ear flaps, second- their front flippers are much larger than those of the true seals. They are able to walk on their flippers while true seals must essentially flop to get around.

Brown fur seals have a very limited distribution and only occur on the southwestern tip of Africa and the southeastern tip of Australia. They are very social animals and use vocalizations to recognize and identify each other amongst other brown fur seals in their large breeding colonies.

The last member of the pinnipeds, the Walrus, is a single-species group. The walrus (Odobenus rosmarus) is one of the largest pinnipeds. Males grow much larger than females, and can be up to 4,000 pounds!

In addition to their large size, walruses are also known for their large tusks. Like the sea lions, walruses also have larger front flippers than the true seals.

Walruses can be found in the subarctic waters of both the Pacific and Atlantic oceans. Walruses spend most of their time in the shallows and within ice floes hunting benthic mollusks.

Despite their large size, these animals eat invertebrates and other small prey items. Their main predators are polar bears and orcas. 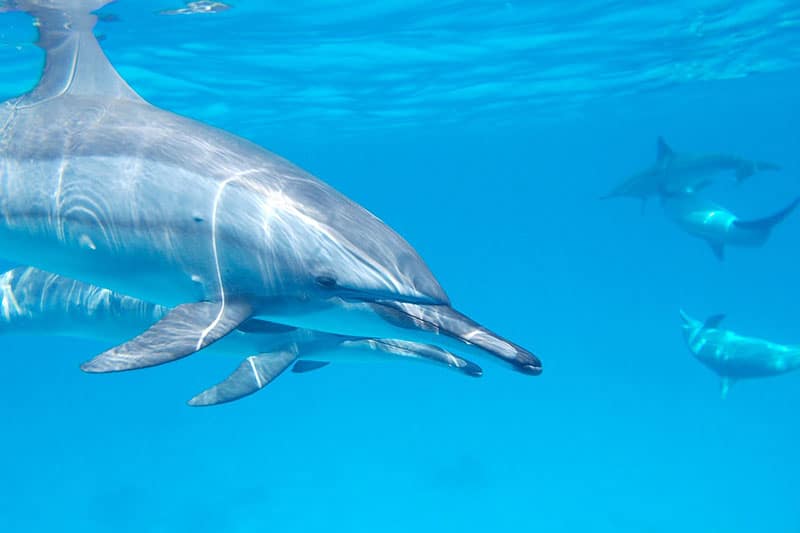 Cetaceans are characterized by being fully aquatic and not having the ability to survive on land. Additionally, they have a stream-lined body plan with relatively large and powerful tails that they use to propel them forward. Cetaceans are also characterized as being highly intelligent and very social mammals.

Generally speaking, whales are the largest of the cetaceans. Whales can be broken up into two main groups; baleen whales and toothed whales.

Baleen whales have specialized keratinaceous plates in their mouths that essentially look like a soft hairbrush that are used to filter and trap small invertebrates like shrimp, krill and plankton for the whales to eat. Toothed whales, on the other hand, are equipped with conical teeth to feed on larger prey items.

The blue whale, arguably the most iconic marine mammal, is the largest living animal on earth. These gentle giants can grow to be nearly 100 feet long.

Blue whales fall into the baleen whale group and are capable of gulping up to 220 tonnes of water at a time to push through their baleen to capture hundreds of pounds of krill throughout the day. Blue whales can be found virtually anywhere in the earth’s oceans but tend to be in deeper waters.

They are capable of diving to incredible depths of up to over 6,000 feet in search of food. Sperm whales have been known to eat giant squid, rays and even sharks.

Dolphins, well known for performing impressive tricks at aquarium shows, are a diverse group of cetaceans with approximately 40 different species. They are incredibly social and often travel in groups. Typically, dolphins are associated with warmer and tropical waters, but some species are adapted to living in cooler waters.

You may also like:  How Strong Are Tigers? (Answered & Examples)

Bottlenose dolphins are arguably the most well known of the dolphins. They are commonly featured in aquariums and animal encounter experiences. They are a widespread species and can be found in tropical and temperate waters throughout the world, but are not present in polar or arctic waters.

The spinner dolphin is a small species of dolphin best known for its impressive displays where they launch themselves out of the water and complete several spins within seconds. It is thought that this behavior could be used to communicate with other spinner dolphins. These acrobatic mammals are found in tropical waters throughout the world.

Porpoises look very similar to dolphins and are often confused with them. They are different in a few ways, perhaps the most noticeable being the shape of their snout.

Dolphins tend to have longer, more narrow snouts, also known as beaks, whereas porpoises have more rounded heads without an obvious beak. Porpoises also have flat, spade shaped teeth as opposed to the sharp, cone shaped teeth that dolphins have.

The Vaquita is the smallest of the cetaceans, growing to be only four and a half feet to five feet in length. The vaquita has a very small distribution and is only found in the very northern portion of the Gulf of California between Baja, California and Baja, Mexico. Sadly, these porpoises are very close to becoming extinct with only an estimated 10-20 individuals left as a result of being commonly caught as by-catch.

Harbor porpoises are well known and commonly spotted on whale watching tours. This species is associated with more shallow, coastal waters and is rarely found in deep water.

Harbor porpoises are known to live in estuaries, bays, and harbors in the North Atlantic, Pacific and Black sea. It is rarely found in warm or subtropical waters.

The sirenians, also known as the sea cows, are a group of herbivorous, slow-moving, fully aquatic mammals. Sirenians are broken up into two families; the dugongs and the manatees. They are gentle giants and are known for grazing the seafloor for sea grass, much like a cow would graze a pasture for grass.

Manatees and dugongs have very large tails, otherwise known as flukes, and small pectoral fins. Most of their movement comes from their flukes pushing them forward ever so slowly. They are associated with tropical and subtropical water and will migrate in the winters to warmer waters.

There are only three species of manatees which can be found in warm waters along the coast or in river systems in North America, South America, and Africa. They are incredibly intolerant of the cold, and can actually become very sick and even die if they are caught in waters that are too cold. This leads them to migrate seasonally to find waters of optimal temperatures.

You may also like:  10 Strongest Animals on Earth (With Pictures)

The North American manatee, also known as the West Indian manatee, is a well known inhabitant of the warm waters of coastal Florida. But they are also found throughout parts of the Caribbean and Gulf of Mexico. In Florida, they are well known for traveling from bays into freshwater-fed springs in the winters.

The Amazonian manatee, as the name would suggest, is found in the Amazon river basin. This species of manatee lives exclusively in fresh or brackish water and is the only species of manatee to do so. Their main threat is hunting, where local people hunt them for their meat and skin.

There is only a single species of Dugong (Dugong dugon) left in the world. At first glance, it is easy to mistake a dugong with a manatee as they are both big, relatively round, and gray with large flukes.

The dugong however has a tail more similar to that of a dolphin’s. Additionally, their snouts are a bit more pronounced and down-turned than those of their relatives.

Dugongs are native to Australia and the Indo-west Pacific. Dugongs, unlike manatees, are strictly marine and very rarely venture into brackish water.

While you may have never heard of the term “fissipeds”, you likely know what a fissiped is. There are many species of fissipeds, but there are only two species of marine fissiped. Fissipeds are a large taxonomic order that include carnivorous species with toes separated from one another, including animals like dogs, cats, raccoons, ferrets and more.

Most fissipeds are terrestrial, however there are two different species of marine fissipeds that split their time between land and sea. These two species are the river otter and the polar bear.

The polar bear is arguably one of the most well known of the marine mammals however some people do not always consider them as marine mammals. That being said, Polar bears spend much of their time in the icy, cool waters of the Arctic circle.

When they aren’t swimming, polar bears spend their time on the arctic ice. As climate change progresses and arctic ice begins to melt at a more rapid place, polar bears face the increasing threat of extinction.

As far as marine mammals go, few are cuter than the sea otter. Sea otters are native to the northern Pacific ocean.

They are known for spending time floating on their backs while simultaneously working to crack open the shells of clams or mussels or grooming their fur. Sea otters often grab hold of other individuals to create a raft of sorts.