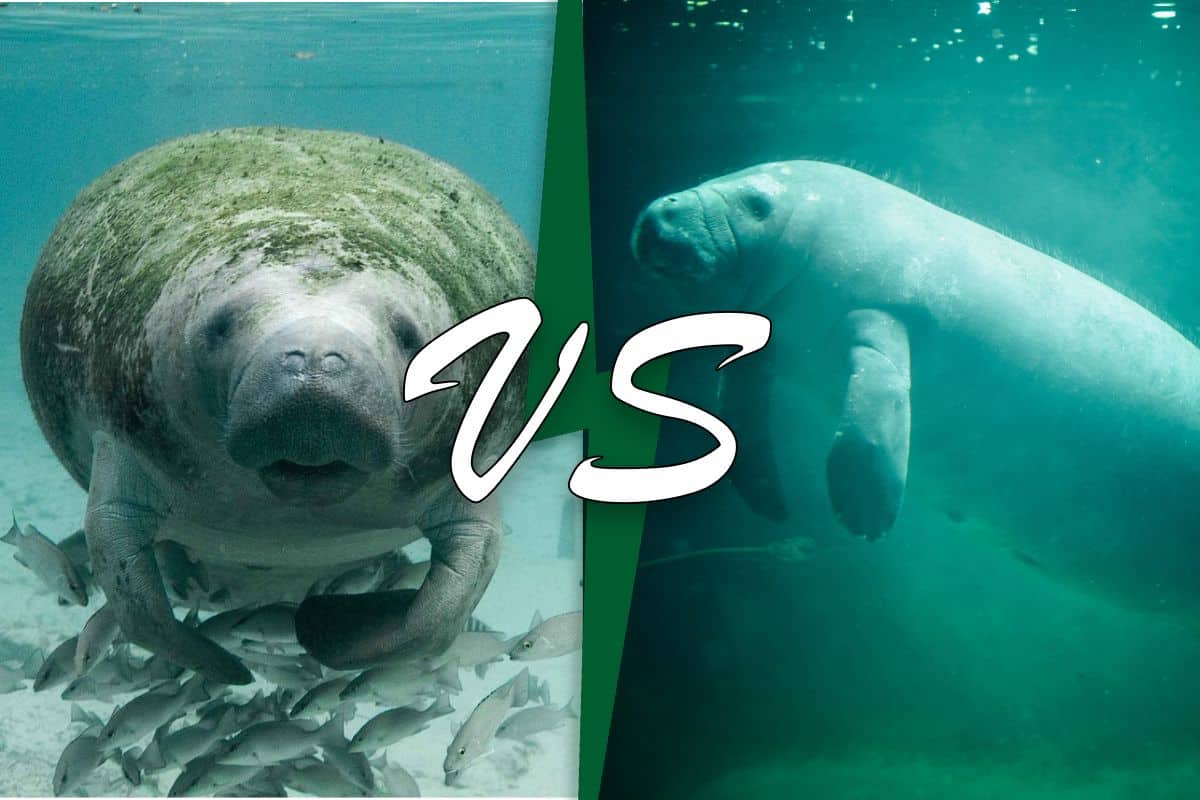 Manatees and dugongs, both nicknamed sea cows, are members of the order Sirenia and are very similar creatures. They are both large, grey aquatic mammals that inhabit shallow coastal regions as well as tropical/subtropical regions. These two creatures are similar in size, shape, and color and can easily be mistaken for one another.

Despite being close cousins and sharing similar characteristics, manatees and dugongs are distinctly different animals. This article will detail the differences so you can easily tell the two mammals apart.

1. They aren’t in the same family

In addition to length, manatees can outweigh dugongs. The average dugong weighs up to eight hundred pounds, and the largest dugong on record was 2,240 pounds. On average, the dugong’s manatee cousin weighs around twelve hundred pounds, with the largest manatee species weighing up to three thousand pounds.

3. They live in different parts of the world

These two animals are found in different regions of the world. Dugongs are found throughout the Red Sea, Indian Ocean, and the western Pacific Ocean. They can be found from East Africa to Australia and New Guinea.

Manatees are primarily found in the shallow waters of the Gulf of Mexico, the Caribbean Sea, and part of the Amazon river basin. Manatees love warm, slow-moving waters like estuaries, rivers, coastal regions, and saltwater bays. They love areas with considerable seagrass growth. Some manatees can be found in Africa and West India.

One of the most significant differences between the dugong and the manatee is their snouts. Dugongs have long, narrow snouts with thick vibrissae, or mustaches, that grow on their upper lips and chins.

Manatees have rounded snouts with split lips. Both sides of their lips can move independently to help them grab and eat plants.

5. Their teeth are different

Dugongs and manatees have similar omnivorous diets, but they have different teeth. Manatees have flat teeth they use to grind plants.

Dugongs have two incisors that continue to grow throughout their lives, similar to the tusks of a walrus. The male dugong has much more prominent incisors, but the females also have them.

6. Dugongs don’t have nails on their flippers

You may also like:  Do Killer Whales Eat Humans?

Not only do these two creatures have different flippers, but they also have different tails. Manatees have fairly short tails compared to their bodies, usually about two to three feet.

The tail of a manatee is also paddle-shaped, unlike that of a dugong. Dugongs have dolphin-like, fluke-shaped tails that are longer than a manatee’s tail—a dugong’s tail measures between four and five feet.

While you may have seen groups of manatees together, they tend to be solitary creatures. They gather in areas where food is plentiful but do not typically travel together.

Conversely, dugongs are very social animals. They travel in groups called herds, which can total in the hundreds.

Sexual maturity is another significant difference between dugongs and manatees. Female manatees can mate as early as the age of three but typically start breeding at the age of five. Female dugongs take much longer to mature sexually.

A female dugong doesn’t become sexually mature until she is ten. Even still, she doesn’t usually mate until five years later, at the age of fifteen.

What is a Manatee?

Manatees are large marine mammals with paddle-shaped tails. Though they look nothing like the mermaids of lore, it is believed manatees inspired mermaid legends. As herbivores, they spend their lives foraging for aquatic plants such as sea grass.

You might be surprised to learn that manatees are most closely related to elephants, sharing a common ancestor. Manatees do not have the necessary neck vertebrae to turn their heads like other mammals, so to look around, they must turn their entire bodies.

What is a Dugong?

Dugongs are plump marine mammals with fluke-shaped tails. They are found in the shallow waters of the Indian and western Pacific Oceans.

Dugongs are close cousins of the manatee but are members of a different family. In fact, dugongs are the only surviving members of the Dugongidae family. These herbivores graze on underwater grasses and plants.

Though they are related, dugongs and manatees differ in many ways. Do you think you can tell the difference?