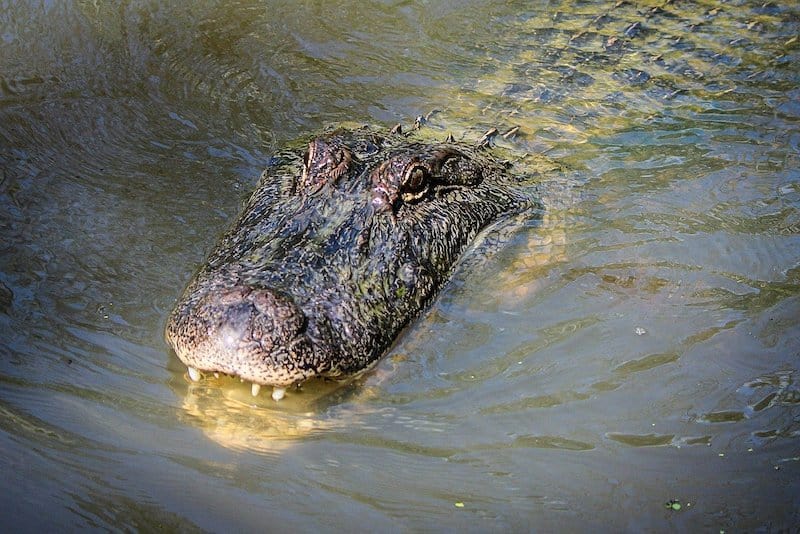 Swamps are unique ecosystems where water often covers most of the land. They are transition zones between land and water, and can be freshwater, saltwater or brackish (not as salty as seawater). While some animals avoid these marshy areas, they are the perfect environment for many water-loving species. In this article we will look at 12 types of animals that live in the swamp.

Animals that Live in the Swamp

There are several swamps in the United States, but for this article, we will take a closer look at the Florida Everglades and 12 of the animals that live there. 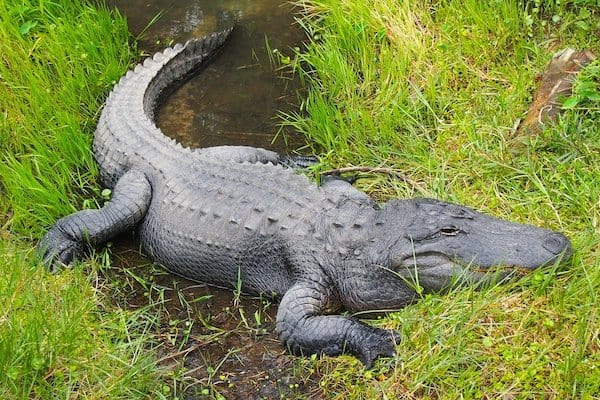 The exception to this rule is when people start to feed them. An alligator that is used to getting food from a human will start to see humans as a food source and could become dangerous.

Breeding season is the most dangerous time to be around alligators, as males are more territorial than usual and females will protect their nests and their recently hatched babies.

Always exercise caution when near freshwater in the Southeast, especially if you have small children or pets. While alligators aren’t innately vicious, they also won’t turn down a free meal.

The Florida softshell turtle is commonly seen all over the state but usually stays close to water, living near lakes, rivers, ponds, and swamps.

These turtles are unique because they have a soft leathery shell instead of a hard keratin shell like most turtles and tortoises and they are actually able to move very quickly on land.

Softshell turtles can live over 50 years. Females will typically lay around 10-40 eggs each clutch and can lay 3-4 clutches per year. Though they are prolific breeders, most hatchlings and young adults will not make it to breeding size. This is due in part to predation by alligators, other turtles, snakes, birds, and humans.

These turtles will eat just about anything they can get their mouths around, but their most common prey are fish, invertebrates, and amphibians.

These behemoth turtles are one of the heaviest species of turtle in the world with males reaching over 200 pounds.

Unlike softshell turtles, alligator snappers are ambush predators that will wait for a fish or other prey item to swim past their mouth, at which point they snap them up.

Often found in swamps and bogs, you could easily walk or swim right past them without noticing as they are great at camouflaging, can hold their breath for up to 50 minutes, and usually just look like big rocks.

Pygmy sunfish are a common fish in Florida and are frequently found in the roots of floating plants and along the shore in water grasses.

They are a popular species in the aquarium trade, where they are marketed as nano fish due to their diminutive size.

You may also like:  13 Animals with the Best Memory (Pictures & Fun Facts)

If you are in their habitat and want to collect your own, your best bet is to take a hand net to an area with shallow water and lots of water lettuce or other floating plants and dip your net under them. You will likely catch either pygmy sunfish, least killifish, or gambusia.

If you do go out collecting in Florida, be sure not to transport any water lettuce as it is an invasive species.

Pygmy sunfish feed mainly on small worms and invertebrates in their natural habitat.

One of the most hated animals on this list is the cottonmouth, also known as a water moccasin.

These snakes are venomous but are not as aggressive as many people think they are. While they will hold their ground and open their mouths to intimidate predators, they don’t seek out humans to chase down and bite.

Most cottonmouth bites are actually a result of them being stepped on or handled roughly. These snakes do give live birth and can have litters roughly every 2-3 years.

Often mistaken for cottonmouths, these snakes are nonvenomous and rather shy. If they see you, they will likely swim away from you or go underwater to hide.

They feed mainly on fish, but will also eat invertebrates, lizards, and amphibians if the opportunity presents itself.

Unlike cottonmouths, they will also frequently climb trees in order to sun themselves and can be found rather high up if you know where to look.

The most deadly animal in the world, mosquitos are responsible for the deaths of over a million people per year. This is because they can ingest pathogens when biting an animal, and then transmit them to the next creature they bite. Most mosquito related deaths happen outside of the United States, however even here mosquito transmitted diseases such as West Nile virus and Zika virus are problematic.

There are over 80 species of mosquitoes in the Everglades and they feed on just about any mammal they can find. When you visit swamps be sure to pack your bug spray as these animals know how to find you and aren’t shy about feeding.

Found throughout Florida in freshwater rivers and swamps, these adorable creatures are the bane of every fish farmer’s existence due to their ravenous appetite.

While most people think of otters as adorable, they do cause lots of problems for Florida’s fish farming industry, often cleaning out several ponds of fish in just a few hours.

River otters make their homes along the banks of rivers, often reusing beaver dens. They live in social groups and will eat just about anything they can catch.

Even though they are fairly common in Florida’s waterways, it is not common for people to see them as they are most active in the evening and at night and tend to avoid humans.

Snowy egrets are found in swamps and coastal marshes where they hunt for food in shallow water. They feed mostly on fish, shrimp, and invertebrates, but have also been known to eat frogs and small snakes. These egrets slowly move through the water on their long thin legs, peering down below them to find their catch.

These beautiful birds were hunted almost to extinction in the 1800s due to their fluffy white feathers, which were popular in the fashion industry. Thankfully, protections were put in place which has allowed them to recover well.

These days they are actually quite common and it’s likely you will be able to see them when you visit the swamp.

Feeding on aquatic plants, they will dive down into the water to find food if none is readily available on the surface.

For small birds, they are surprisingly poor flyers and must make a running start to get off the ground. However they are at home in the water, and their huge feet help them paddle as well as walk on top of aquatic vegetation.

The most endangered animal on this list is the reclusive Florida panther. Florida land developers have been filling in and building on the wetland homes of these shy creatures for decades. This construction has led to a rapid decline in Florida panthers due to a lack of resources and run-ins with traffic.

Sadly, in 1995, these gorgeous animals were literally on the brink of extinction with only 30 animals left in the wild and many were suffering from birth defects due to inbreeding.

Scientists devised a plan to introduce 8 female Texas cougars to the area and the plan was a success. Today there are an estimated 200 Florida panthers in the wild and they are no longer suffering the effects of inbreeding.

When you think about swamps you probably don’t picture rabbits, but these unique rabbits are actually adapted to live only near water.

They are strong swimmers and frequently hide in the water with just their faces exposed. They are herbivores and feed on both aquatic and terrestrial plants.

While these rabbits look similar to the cottontail rabbits many of us are used to, they do have quite a few differences. Their bodies are smaller, their ears and legs are shorter, and they walk more like a cat than a cottontail, which is known for hopping.

Swamps are incredible ecosystems filled with a plethora of interesting animals. We only touched on a few animals you could see while visiting a swamp, so if you are planning on making a trip, I recommend picking up a field guide. Be safe when exploring swamps and consider exploring via a kayak or paddle-board for the best experience.