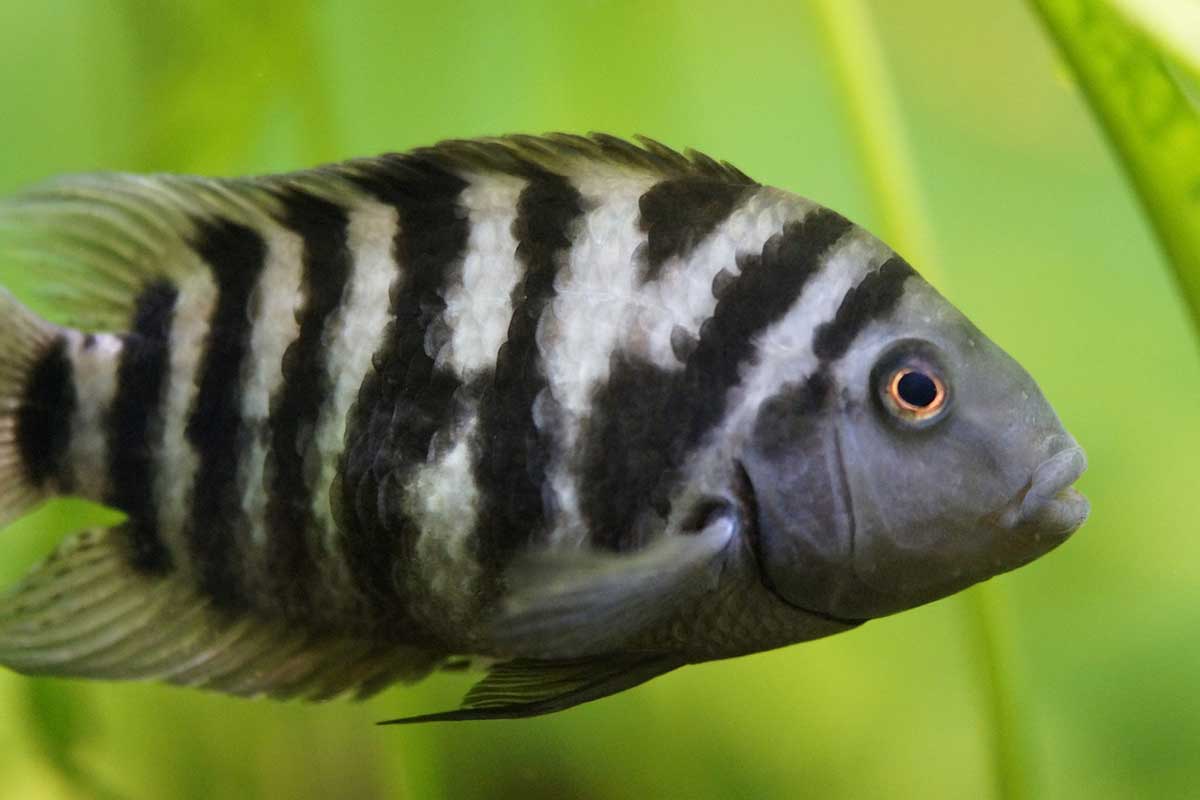 Fish come in all shapes and sizes, including the combo of black and white. Why? Stripes or other patterns in black and white helps fishes camouflage underwater and disrupts predators from identifying their shape, especially in shady areas or from a distance. Whether you’re planning a snorkeling trip, wondering what fish to add to your aquarium, or just curious about fish species, you’ll want to learn more about these 18 black and white fish.

Let’s see how many you already knew about!

Also called cories for short, panda corydoras are a species of small catfish. They grow around 2 inches long and have a black and off-white pattern similar to a panda. They are peaceful and social fish that do well in freshwater community tanks as pets. Although these fish are rare in the wild, they are native to the Amazon River in Peru.

Magpie perch have mostly white bodies with two thick, black bands across their body. Juveniles will also have a red tail that darkens as they mature. They can grow up to 16 inches long and live in reef habitats off northern New Zealand and southern Australia.

The black and white Chromis is a saltwater aquarium fish from the Australian, Christmas Islands, and French Polynesian regions. They can grow up to 7 inches but average around 3 inches long. They have blackish-gray bodies with white tails; the back half or third of their body can also be white. These fish are well-adapting and hardy fish for reef tanks and thrive in groups.

The black and white snapper is a marine ray-finned fish that can grow up to 30 inches long, but average at 14 inches. Adults have silvery-white bodies with dark black patterns and blotches that vary by individual. Juveniles tend to have broader white areas among the black patterning. You can find them in the Indo-Pacific ocean.

The old wife fish has a unique look with two separate dorsal fins, one being sickle-like. However, beware when handling them since their dorsal spines contain venom. Their body is silver-white to brownish with 6-8 black vertical bands of various widths. They are native to the Indo-Pacific region, swimming alone, in pairs, or in large schools among rocky areas and seagrass beds.

The Atlantic spadefish have fins that look similar to angelfish, a blunt snout, and 4-6 vertical black bands running along their silver-white body. They are marine fish, a common resident of large public aquariums, and the symbol for the North Carolina Aquariums.

Also known as the black and white damsel fish, the whitetail dascyllus is a saltwater fish growing around 3 inches long. You can identify them by the three vertical black stripes against their white bodies: one stipe across the eye, the middle of the body, and before the tail, with tails typically white.

You may also like:  9 Amazing Animals That Live On Mountains (With Pictures)

Moonlighters are round-bodied fish with 6 dark vertical stripes, including one across the eye and around the tail. They are a species of marine ray-finned fish native to the coastal rocky reefs of Australia. While juveniles are solitary, you can often find adults in pairs in the wild.

Although not bright orange like Nemo, the black and white clownfish is just as adorable in size. They have a distinctive black body and three vertical white stripes. However, juveniles can be light brown until they mature. These fish live among anemones on the reefs of the Indo-Pacific ocean.

The western Talma is a butterfly fish species growing around 9 inches long with a compressed body, high dorsal fins, and a pointed, long snout. They typically have a silvery-white body with 5 vertical black bars. As a pet, they thrive in colder marine aquariums with water temperatures between 66 and 77 °F.

Banded butterflyfish are small fish with small mouths and multiple vertical black bands on their body to help with camouflage. With a band across the eye, predators find it hard to identify which end is the head and tail. They are native to coral reefs in the western Atlantic Ocean. These fish are carnivores or omnivores, feeding on reef tube worms, corals, small crustaceans, and more.

Black guneafowl puffers have rounded black bodies with multiple small white spots. Coloring can also vary with yellow spots or undersides as well. They’re native to the Indo-Pacific oceans, grow at least 20 inches long, and puff up when threatened like all pufferfish species.

The spotted drum, also called spotted ribbonfish, has a unique appearance with its unusually long dorsal fin resembling a ribbon. They grow between 6-10 inches long and have black and white patterns of both stripes and dots. You can find them from Brazil to South Florida in the Atlantic Ocean, especially near small caves or under ledges.

Scissortail sergeants are a large damselfish species, with adults averaging between 6.3 to 11 inches long. They are white with 5 vertical black bands and get their name from the scissor-like striped tail. These fish are native to offshore rocky and coral reefs in the Indo-Pacific area, including the Red Sea.

The front cichlid, also called humphead cichlid, have a large hump on its forehead that grows larger in more dominant, older males. Their bodies are white, yellowish, or blue with 5-7 vertical black bars. They are a native east African species living in Lake Tanganyika. However, they are also a highly sought-after pet fish for freshwater aquariums.

The convict cichlid or zebra cichlid is a small fish growing up to 6 inches long with a silver-white body and multiple black vertical stripes along the length. Their native habitat is the streams and lakes of Central America, where they prefer moving water with rocks or sunken branches as cover. They are aggressive freshwater fish that aren’t suited for community tanks.

Convict surgeons have white, oval, compressed bodies with 6 vertical black stripes on the side, including one passing through their yellow eye. There’s also a pop of yellow at the top of the dorsal fin. They are native to the Indo-Pacific ocean. However, they can easily adapt to different conditions and can be found in other oceans, such as those around the Hawaiian islands.

Shiro utsuri is a large two-colored koi fish that grow between 28 to 40 inches long. They have a black body base with white patches that are like the color of snow in healthy individuals. Koi fish are freshwater fish popular as pets since they symbolize luck and prosperity.