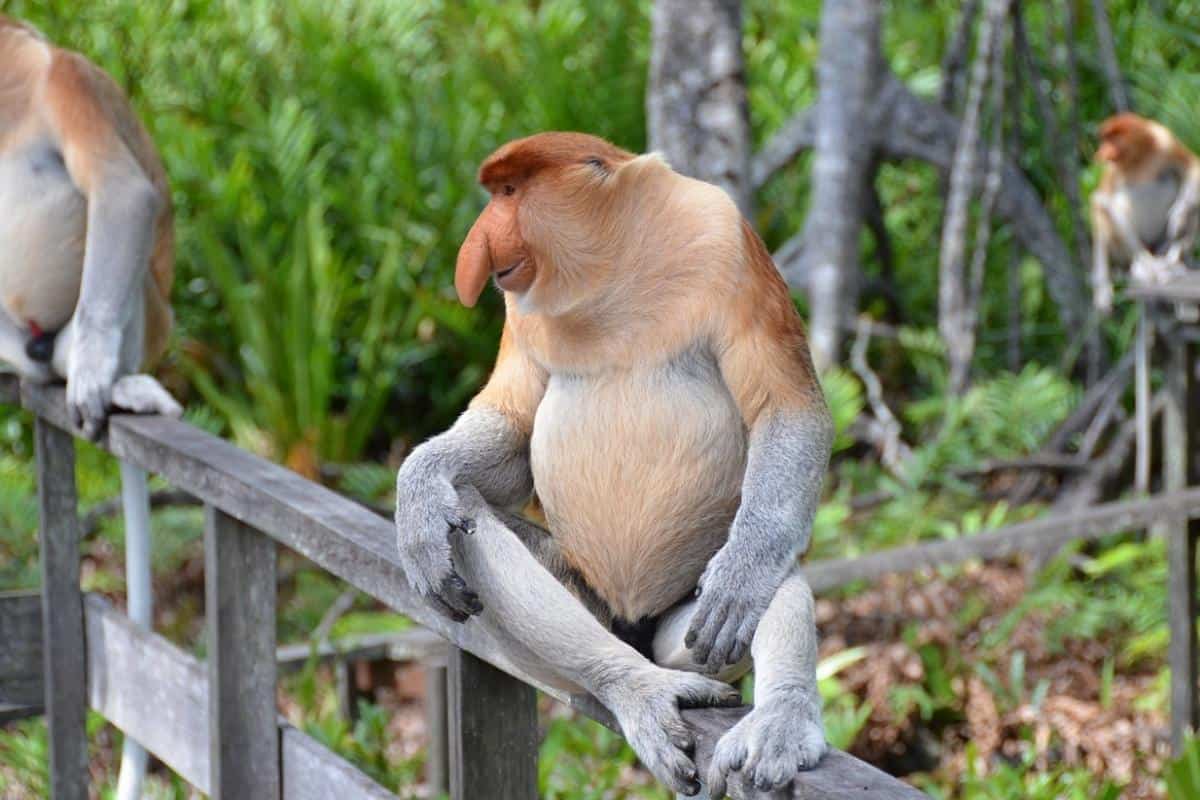 There are many animals with big foreheads, and they come from all around the world. While some of these animals use their big foreheads for storage, others use them for protection or to help with mating.

From gorillas and beluga whales to elephants and Bald Uakari, below are nine animals with big foreheads:

Beluga whales are among the most distinctive and recognizable types of whales, thanks to their globular head. These whales are easily identified by their white coloration, which earned them the nickname “sea canaries.”

Beluga whales are also the only type of whales that can make facial expressions. That’s because of their unique skull structure, which allows them to move their face muscles independently. As a result, belugas are often described as looking like they are smiling.

Belugas are found in arctic and sub-arctic waters all over the world, from the coast of Russia to the St. Lawrence River in Canada. They are very adaptable creatures and can live in both salt and fresh water habitats, as well as in areas where there is a mix of both. Their diet consists mainly of fish, although they also eat crustaceans, mollusks, and other small marine animals.

The Green Humphead Parrotfish is a species of reef fish that is found in the Indo-Pacific region. These fish get their name from their large, protruding foreheads, which are used to bash against coral formations and break off pieces of food.

Green Humphead Parrotfish are primarily herbivorous, feeding on algae and other plant matter. However, they also consume small amounts of invertebrates and fish and typically have a lifespan of 30 to 40 years.

Green Humphead Parrotfish are an important species for the health of coral reefs. Their grazing helps to keep algae growth in check, which can otherwise smother and kill corals. They are also a popular food fish in many parts of the world, and their bright colors make them a popular choice for aquariums.

The Orangutan is a large primate found in the rainforests of Southeast Asia. Orangutans are easily recognizable by their reddish-brown fur and large, bulbous foreheads. Adult Orangutans can grow to be over six feet tall and weigh around 170 lb (78 kg). They have a lifespan of about 45 years in the wild.

The Orangutan’s habitat is under threat from deforestation and the illegal wildlife trade. As a result, the animal is classified as an endangered species. There are only an estimated 230,000 Orangutans left in the wild.

Despite their large size, Orangutans are gentle and shy animals, spending most of their time in trees. Orangutans are also excellent swimmers and have been known to dive up to 20 feet into the water to catch fish. In addition to their primary diet of fruits and leaves, Orangutans will also eat insects, eggs, and small vertebrates.

The Bald Uakari is a species of monkey found in the rainforests of the western Amazon River Basin. Their name comes from their distinctive bald heads, covered with red or white skin.

The shape of their heads is thought to be an adaptation for moving through the dense foliage of the jungle. Their big foreheads also help them to regulate their body temperature when it’s too hot.

Bald Uakaris live in small groups of around ten individuals and spend most of their time in the trees. These monkeys are mainly active during the day and use their long tails to help them balance as they move through the branches.

Although Bald Uakaris are not currently endangered, their habitat is under threat from logging and other forms of development. As a result, their numbers are declining, and they are classed as a “vulnerable” species.

Gorillas are a large primate species native to Africa and are the largest living members of the ape family, distinguished by their large size, stocky build, and distinctive features.

The head of a gorilla is large and heavy, with a prominent forehead and small eyes. Their arms are longer than their legs, and they have opposable thumbs on both hands and feet.

Gorillas live in small family groups consisting of an adult male, several females, and their offspring. They primarily eat leaves, stems, and fruits but will also eat insects and small vertebrates.

Gorillas are gentle giants that play an important role in their ecosystems. Unfortunately, Gorillas are also endangered due to habitat loss and hunting.

The Proboscis Monkey is a fascinating creature found in the tropical rainforests of Southeast Asia. It gets its name from its long, protruding nose, which can be as much as six inches long in males. The monkey also has a large belly and potbelly-like frame, which earned it the nickname “Dutchman” in colonial times.

Proboscis Monkeys are social animals, living in troops of up to 40 individuals. These monkeys are mainly active during the day, spending their time feeding on leaves, fruit, and flowers.

Although they are not currently endangered, Proboscis Monkeys are under threat from habitat loss and hunting. Fortunately, there are several sanctuaries and national parks dedicated to preserving these unique creatures.

Elephants are the largest land mammals with large tusks, trunks, and a gigantic temple area on their foreheads. An elephant can weigh up to 14,000 pounds (6,350 kilograms), with its trunks alone weighing around 400 pounds. But despite their huge size, elephants can run at speeds of up to 25 mph (40 km/h).

Elephants are native to Africa and Asia and typically live in large herds. Herds are led by a matriarch, which is usually the oldest and most experienced female elephant. Female elephants stay with their herd for life, but males eventually leave to join another herd or live independently.

The Oranda is a type of goldfish that is native to East Asia. It is distinguished by its bright red coloration and the large, fleshy growth on its head, which resembles a flower or crown, known as a “wen.” The wen can grow to be quite large, and it covers the fish’s eyes, gills, and mouth.

Orandas are popular pets due to their unique appearance and can grow to be quite large, reaching lengths of up to 18 inches. They are typically peaceful fish, but they can be aggressive towards other animals if their territory is threatened. Orandas are not currently endangered but are considered a vulnerable species due to habitat loss and pollution.

The American Bison is an iconic mammal that is native to North America. It is the largest land animal on the continent, and it once roamed freely in huge herds across the plains. But due to hunting and habitat loss, their numbers have declined dramatically, and they are now considered an endangered species.

American Bison are typically brown or black in color, with a shaggy coat of hair. They can weigh up to 2,000 pounds (900 kilograms) and grow to be six feet tall at the shoulder. Male bison are larger than females and have large horns for fighting and defense. Bison are herbivores and primarily eat grasses and other plants.