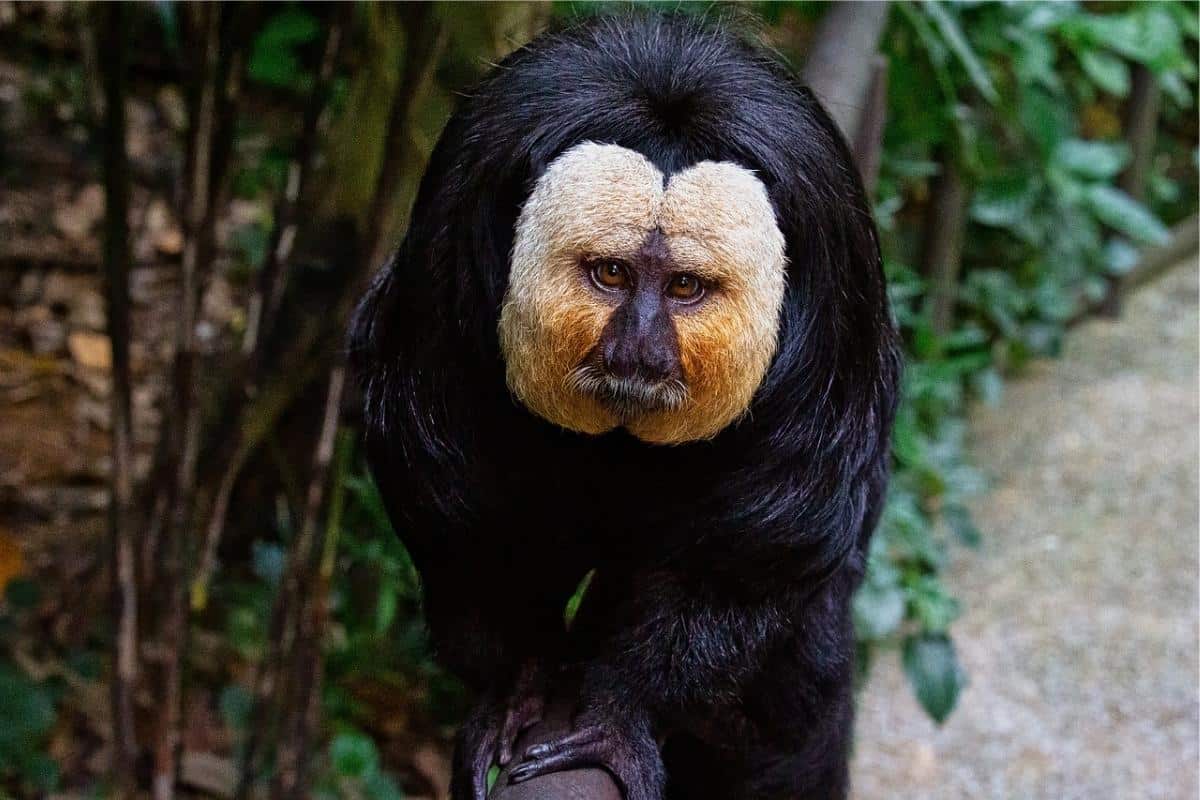 Monkeys are fascinating creatures that are known for being intelligent. While many types of creatures, including chimpanzees, lemurs, and galagoes are sometimes called monkeys, monkeys are actually a distinct group of animals. Keep reading to learn more about the different types of monkeys found across the world.

One of the largest groups of monkeys is the guenons, a group of Old World monkeys that includes 26 species. These monkeys can move gracefully thanks to their long tails. Many guenons have colorful patterns on their fur, as well as large pouches in their cheeks that they use to store food.

These New World monkeys live exclusively in the rainforest. This monkey gets its name from its loud vocalizations, which sound like a bark or a roar. In fact, these vocalizations are so loud that they can be heard from up to 3 miles away!

There are 15 different species of howler monkey, including the endangered Yucatán Black howler monkey. Thanks to their distinct cries, they’re a part of many legends and myths.

Capuchin monkeys are known for their dexterity and intelligence. These small monkeys respond well to training, which has led to roles in movies like Night at the Museum and 3:10 to Yuma. In the wild, the capuchin is known for using tools like rocks to crack open nuts.

While capuchins are mostly found in rainforests, they can also be found in mangroves and dry forests. When under threat, capuchins whistle to other members of their group to alert them of danger. There are many predators that attack capuchins, including boa constrictors.

These monkeys have long limbs and advanced prehensile tails, which they use to swing from branch to branch. Not only are spider monkeys known for hugging each other, but they’ll also wrap their tails around each other. Unlike most monkeys, spider monkeys don’t have thumbs, which leads them to rely on their tails for many tasks.

Native to Africa and Asia, macaques include 23 different monkey species. One species, the Japanese macaques, is known for bathing in hot springs. Another species, called the barbary macaque, is the only monkey that lives in Europe!

Macaques are highly social and use vocalizations, facial expressions, and posture to communicate with each other. When macaques are around humans, they’re also known for being pickpockets!

The woolly monkey gets its name from its thick, soft coat of fur. Thanks to their long prehensile tails, these monkeys are able to quickly move through the Amazon forests that they call home. Like many monkeys, woolly monkeys are very social and share food to bond with each other.

These Old World monkeys have white tufts of hair along their face and black skin on its face, hands, and feet. It’s primarily found within Savanna woodlands in Sudan, Ethiopia, and Djibouti. Even though the monkey makes it home in dry environments, it needs to drink water daily in order to survive.

The vervet monkey is a close relative to the grivet. Depending on the species, it’s covered in either olive or silvery gray fur, with a patch of black fur on its face. Although this monkey is native to Africa, it’s been introduced to other parts of the world as well, including St. Kitts and Florida. Vervet monkeys are highly adaptable and can thrive in many habitats.

You may also like:  8 Animals With Antlers (Sizes and Pictures)

From a distance, you could easily mistake a marmoset for a squirrel! These small New World monkeys live in the rainforest and can have black, brown, silver, and bright orange fur. One species of marmoset, the pygmy marmoset, is the smallest monkey in the world.

While most New World monkeys have prehensile tails, that’s not the case for marmosets! Even though a marmoset can’t grasp things with its tail, it does use its tail to stay balanced.

These African monkeys stand out thanks to their thick, bushy eyebrows. The Patas monkey can travel at speeds over 30 miles per hour, which makes it faster than any other primate. While these monkeys usually run on all fours, they can also run on two legs, allowing them to carry items in both hands.

Also known as gray langurs, these monkeys split their time between the ground and the trees. While they walk on all fours, it’s common for them to leap on two legs, which allows them to jump as high as 15 feet! Originally, hanuman monkeys were considered to be a single species, but there are now eight species of monkeys included in this group.

There are 13 species of mangabeys, an African monkey with white eyelids. Many of these species are rare and even endangered, like the red-capped mangabey, which has a burgundy marking on its head that looks like a cap! All mangabey species have tails that are longer than their bodies, which helps them keep their balance.

The only nocturnal monkey, night monkeys have large eyes that allow them to see clearly in the dark. Thanks to this feature, these monkeys are sometimes referred to as “owl monkeys.” When these monkeys sleep during the day, they hide in trees to stay safe.

Baboons can grow to be 34 inches tall and can weigh up to 82 pounds, making them one of the largest monkey types. There are six different species of baboon, including the yellow baboon and the kinda baboon. Baboons are highly social and live in large groups known as troops. A baboon troop can have hundreds of members!

The drill is a close relative of the baboon and is known for its short tail and toothy smile. Drills also have colorful bottoms due to the blood vessels located in that part of their body. Male drills can be up to twice as large as females, growing to be as heavy as 75 pounds.

Like drills, mandrills are also closely related to baboons and are sometimes called “forest baboons.” Mandrills are slightly larger than baboons, which makes them the largest type of monkey in the world.

Mandrills have bright red and blue markings on their faces and bottoms, which makes them easy to recognize. While female mandrills spend most of their time in trees, male mandrills prefer to forage for food on the ground.

Tamarin monkeys are extremely small, usually measuring between 5.1-11.8 inches tall. While they may be tiny, they have long fingers that they use to grab food like insects and lizards. Some tamarin species, including the Golden lion tamarin and the cotton-top tamarin, are endangered.

These monkeys usually make their home in the rainforests of Asia, but can also be found in mountain forests. They primarily feed on leaves, which they can easily digest thanks to their large, unusual stomachs. Lutung stomachs are divided into sacs, which helps them to break down cellulose and safely eat leaves that contain toxins.

This tree-dwelling African monkey lives entirely on fruit leaves. While colobus monkeys have white fur when they’re born, their coats develop markings as they age. Although it’s rare for these monkeys to spend time on the ground, they will leave trees when there’s not enough food.

These Old World monkeys are smaller than any other monkey found in Africa, measuring 14 inches long and weighing just 2.8 pounds. While most talapoins live in groups of about a dozen monkeys, they occasionally travel in groups that include 100 monkeys or more. These monkeys are usually quiet, but they’ll alert each other with loud whistles when they’re under threat.

Found only in the mountains of Ethiopia, geladas have bright red markings on their chests. This feature has earned them the nickname “bleeding-heart monkey.” They have hairless faces, but long hair along their backs. While geladas are sometimes referred to as baboons, it’s officially classified in their own distinct group.

Sakis have long, shaggy fur all over their bodies, even on their faces. They have round faces, long and lean bodies, and big bushy tails. Sakis are monogamous and live in family units. While saki young become independent at six months of age, they stay with their families to help care for new babies.

Ukaris have lots of blood vessels beneath the skin on their faces, which makes their faces bright red! When ukari monkeys are sickly, their faces become pale, making them less attractive to potential mates. Although ukaris have very short tails, they can still quickly move through trees thanks to their long arms and legs.

This small monkey gets its name from Joel Asaph Allen, an American zoologist. While most groups of monkeys include multiple species, Allen’s swamp monkey is the only species in its group. It can be found in the swamp forests of Central Africa, where it primarily lives in trees.

The unusual-looking monkey is famous for its long, large nose. While researchers aren’t sure why its nose is so large, it’s believed that the nose might amplify its vocalizations. There are two species of proboscis monkeys, both of which are exclusively found on Borneo, an island in Southeast Asia.

Found in the Amazonian rainforest, titi monkeys are monogamous and have close family relationships. Not only do family units live together, but these monkeys will even wrap their tails together while they sleep! The number of known titi monkey species has rapidly increased in recent years, with a total of 30 species known today.

You may also like:  12 Animals That Live in Caves (With Photos)

It’s rare for these small, slim forest-dwelling monkeys to ever leave the trees they live in. While surilis usually live in groups of about 20 monkeys, some surili monkeys choose to live on their own. These monkeys are found across the Thai-Malay Peninsula, on islands like Borneo, Java, and Sumatra. Due to habitat threats, some surilis, like the Java surili, are endangered.

Doucs have bright and colorful markings which can vary from species to species. The red-shanked douc has bright burgundy legs, while the grey-shanked douc has orange marking across its face. Although docus are sometimes called “douc langurs,” their closest relatives are actually the proboscis and snub-nosed monkeys.

The kipunji was discovered by researchers in 2003, making it the first monkey genus discovered since 1923. This monkey prominently features in folklore and myths, and before its official discovery, it was assumed to be a creature of legend. It has a loud and unusual cry that sounds like a combination of a honk and a bark. Even though this monkey was discovered recently, it’s on the endangered species list.

What is a monkey?

Monkeys are a type of mammal known as simians. Most monkeys are arboreal, which means they live in trees. However, there are some species of monkeys that are terrestrial and never venture into trees at all.

While there are some similarities between monkeys and apes, monkeys have tails, and apes don’t. Some monkeys have prehensile tails that they can use to grasp branches or even pick up objects. Apes also tend to be larger and stronger than most monkey species.