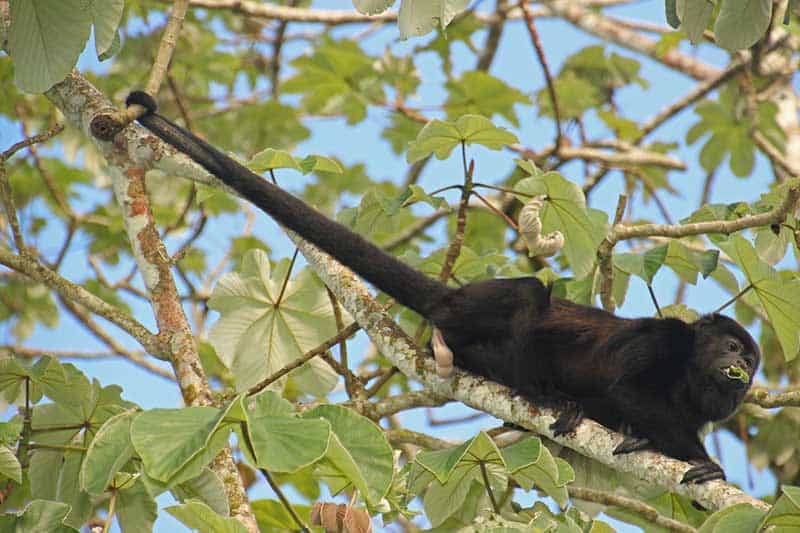 While monkeys are the most common, there are also a few reptiles, some rodents, marsupials, and other mammals that sport prehensile tails as well.

Animals evolved to have prehensile tails as a means to hold on to things. This helps many arboreal animals to hang from trees, grasp food, and hold objects.

In this article, we will be taking a closer look at 10 awesome animals with prehensile tails.

The prehensile-tailed rat can be found in Australia and New Guinea. Here these rats live in rainforests where they are completely arboreal.

They feed on fruits and their tails likely evolved to help them both traverse their ecosystem and to help them eat the fruits they need to survive.

Prehensile-tailed rats weigh an average of 30 grams and are primarily nocturnal.

Brazilian Porcupines live in the forests of South America. They are primarily nocturnal and feed on fruits, bark, leaves, and flowers.

They use their prehensile tail, which is almost as long as their entire body, to help them climb trees and explore their habitat.

These porcupines are solitary with males and females only coming together to breed once per year.

Fun Fact: There is a Brazilian Porcupine named Rico at the Cincinnati Zoo that stars in lots of their social media videos. His main claim to fame is the noises he makes while eating fruit.

The Indian Pangolin is basically an anteater in armor. These animals feed primarily on termites and ants in their native range of India.

The Indian Pangolin is one of the largest of the 13 species of pangolins on the earth. All are endangered due to hunting and illegal poaching for the food industry and for their scales.

These animals are solitary, only coming together once per year to breed, after which the female will give birth to 1 or rarely 2 babies. Their slow reproduction cycles also contribute to their dwindling numbers.

The black-handed spider monkey, also known as Geoffroy’s Spider Monkey, is the only monkey making an appearance on our list of animals with prehensile tails.

These small monkeys weigh roughly 5lbs and use their prehensile tails to swing through their native habitats in Central America, Mexico, and Colombia.

They feed primarily on fruit, but when that is in short supply, they will also eat leaves, nuts, flowers, eggs, and insects.

The Binturong, also known as a bearcat, is found in forests in the Philippines, Borneo, Bangladesh, and Northeast India.

These animals have great vision and are capable of being active at any time of day. Most Binturongs, however, seem to prefer to be awake at night.

While they are classified as carnivores, the main staple of the Binturong’s diet is fruit. Though they also eat birds, fish, and small mammals.

While the Binturong is capable of hanging from its tail when it’s young, it quickly grows out of this and then must use its hands in addition to its tail in order to hang out in the trees.

Kinkajous are native to parts of Mexico and South America in tropical rainforests.

They spend most of their time in trees where they are able to use their tails to assist them with climbing.

They primarily eat fruit, but they are opportunistic eaters and will feed on nectar, insects, and flowers.

Kinkajous breed throughout the year and give birth to a single baby. They then care for their baby until it reaches maturity and goes off on its own.

The Virginia Opossum is found in most states east of the Rocky Mountains as well as Canada and parts of Mexico.

While many people aren’t fond of the Virginia Opossum, these animals are actually great for the ecosystem. They feed on ticks that could otherwise transmit dangerous illnesses. They also are resistant to rabies and distemper.

The main use of the opossum’s tail is for climbing and hanging out. They feed primarily on dead animals and insects, but will also eat fruits, nuts, grasses, snakes, mice, and frogs.

The Southern Tamandua is found throughout most of South America, including Brazil and Paraguay.

This species is the arboreal cousin of the anteater and they feed primarily on ants, bees, and termites.

Tamanduas are mostly solitary, but males and females do seek each other out during the fall, and then a single baby is born in the spring. This baby will ride on its mom’s back until it is roughly a year old and then it will be off on its own.

The Eurasian Harvest Mouse is native to Europe, where it is the smallest rodent and the only mammal with a prehensile tail.

Harvest Mice use their prehensile tails to help them climb and navigate their ecosystems. This added advantage helps them avoid predation and seek out the best foods.

These mice feed on berries, nuts, grasses, seeds, and insects. They are mostly solitary animals, but they will come together to mate. The females will then give birth to 3-8 babies and will care for them until they reach maturity and can go out and find territories of their own.

The only reptile on our list of animals with prehensile tails is the Monkey Tailed Skink, also known as the prehensile-tailed skink.

These animals are native to the Solomon Islands, where they feed on fruits, vegetables, flowers, and insects.

Males and females come together in order to breed, and approximately 6 months later the female will give birth to 1-2 live babies.

You may also like:  What is an Indicator Species? (7 Examples)

Monkey-tailed skinks are primarily arboreal and are quite popular in the pet trade. Keep in mind before handling one that while they seem extremely calm, their bite is much worse than you would expect.