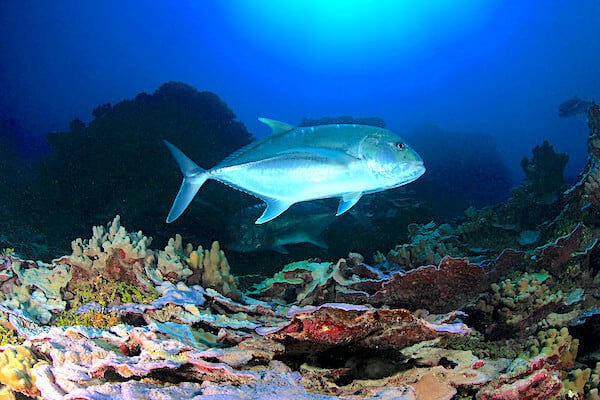 We know that lot’s of birds eat fish, but in many ways it’s much more impressive for a fish to eat a bird. A fish catching a bird seems much more difficult than a bird catching a fish. It’s unusual, and for most fish, birds are only eaten on rare occasions. However it does happen. So let’s take a look at 8 fish that eat birds.

These 8 species of fish have been documented eating members of the bird family. While it may not be a common part of their diet, it definitely happens.

Northern pike have a holarctic distribution in the northern hemisphere. That means they live in North America, Europe, and Asia in cold northern waters. A freshwater species, they like deep lakes and slow moving rivers. They’re a fast, aggressive predator that will attack and eat anything they can fit in their mouth.

Their prey can include birds, and ducks in particular. While most adult ducks are much too big for a pike to eat, ducklings are an easy target as they paddle along the surface of the water.

Pike are fast, powerful fish with a mouthful of razor sharp teeth, so the little ducklings don’t have much hope of escaping. Fortunately, it doesn’t seem that pike actively seek them out. If they cross paths with one, it’s likely to eat them, but ducks aren’t a favored prey item.

While it’s been introduced to many different parts of the world, the largemouth bass is native to North America, ranging from northern Mexico up to southern Canada. It likes to live in areas with lots of underwater vegetation or structures where it can hide and ambush its prey.

When it’s ready to strike, the largemouth bass lunges out from its hiding spot and opens its mouth wide, creating a powerful suction that pulls its meal into its mouth where it is swallowed whole.

Much like the pike, an adult duck is too big for a largemouth bass, but ducklings are fair game, along with any other small bird that lands in the water. Bass are highly opportunistic predators.

A close relative of the pike that’s native only to North America, the muskellunge is larger and more aggressive than it’s cousin. Muskellunge can grow to weights of nearly 70 pounds and close to 8 feet long.

Like the pike they favor slow moving rivers and lakes where they can ambush their prey, using their immense speed, power, and sharp teeth to catch and eat fish, rodents, and birds.

This species is big enough that it doesn’t have to limit itself to ducklings. Muskellunge can easily eat adult ducks and other waterfowl when it’s fully grown. It’s a common belief that ducks form a significant part of their diet, but there’s little evidence to support this. It’s more likely that ducks are eaten when the opportunity presents itself, but they aren’t a primary food source.

This infamous predator is the largest freshwater fish in Europe and one of the largest species of catfish in the world. Some researchers believe it’s the source of several folktales about lake monsters and other water-based creatures. It can grow to more than 10 feet in length and over 400 pounds in weight, and it has a voracious appetite.

The wels catfish has been introduced to many river systems that it’s not native to, and that includes the Seine river in France. Here, these catfish have developed a unique and previously unknown hunting behavior.

They wait near the water’s edge for pigeons to land and drink, and ambush the birds in much the same way a crocodile might strike at a wildebeest in Africa. For these catfish it’s possible that pigeons compose a majority of their diet.

The taimen is a large relative of salmon and trout that is native to Russia, Mongolia, Central Asia and parts of China. Mature fish of 60-70 pounds and six feet in length are common, and at least one specimen reached nearly 7 feet and weighed 231 pounds, and larger sizes are not impossible.

Like other salmonids, they are active predators feeding mainly on other fish. Because of their huge size, they aren’t limited to fish, though. Rodents and birds appear to be a significant part of the diet, although they can only take these prey items when they venture into the water.

The Murray cod, which is not actually a true cod, is a large freshwater predator that inhabits the rivers of southeastern Australia. They are similar in appearance to a grouper or bass, and can grow to massive sizes. Adults weighing over 250 pounds are possible, and fish of that size were once very common before they were drastically overfished.

This fish is the apex predator in its environment, and it eats pretty much anything. Fish, lizards and snakes are all fair game. It’s been documented eating ducks and cormorants, all of which are fairly large birds to be eaten by fish. 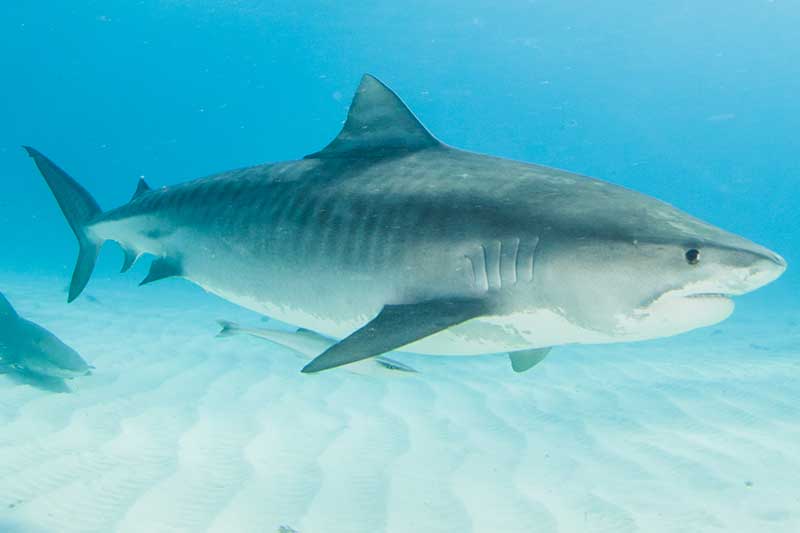 The tiger shark can be found in tropical and temperate waters all across the globe. It’s one of the largest shark species, growing to over 16 feet in length. Named for the dark stripes along their flanks, these massive fish have been nicknamed the garbage disposal of the sea for their tendency to eat anything, even things like license plates and other garbage that look nothing like their natural foods.

Tiger sharks are one of the few species that hunt and eat sea turtles, using their massive jaws and saw-like teeth to carve through their shells. They’re some of the most opportunistic predators in the world, readily eating anything they can find.

This includes any and all seabirds they find resting at the water’s surface. Gulls, albatross and pelicans often spend much of their time far out from the shore and have to rest floating at the surface, where the tiger sharks can easily snatch them.

A large member of the jack family that inhabits the tropical waters of the Indo-Pacific, the giant trevally is hugely popular with sport fisherman for its speed and power, which makes it remarkably challenging to catch.

Growing to about 5.5 feet in length and 180 pounds, they’re usually the apex predator in their environment, and their speed is crucial in helping them catch the fish they typically hunt.

In the Farquhar Atoll in the Seychelles, the giant trevally has been documented regularly hunting fledgling terns. As these birds are learning to fly they often fall into the water, where the trevally quickly congregate and swallow them whole.