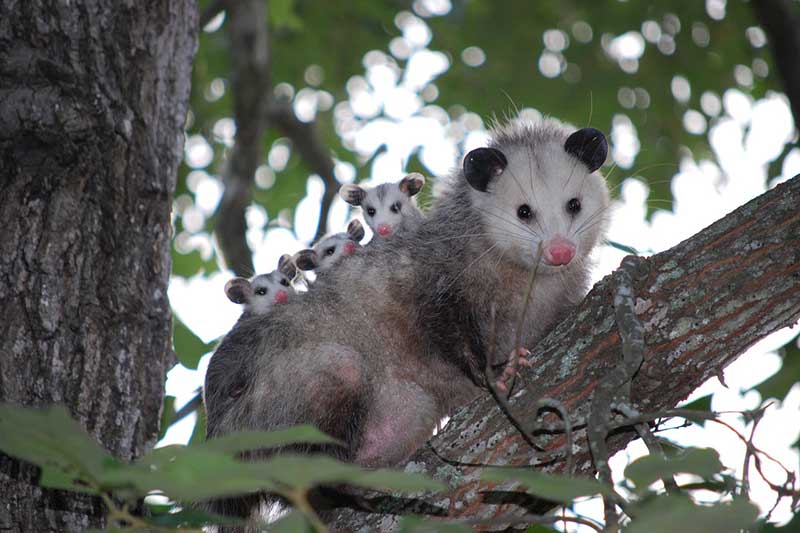 When people hear the words opossum and possum they often assume they refer to the same animal. However, these animals are quite different from each other. They do share some traits in common but are more different than people realize at first glance. The opossum and possum are both marsupials, but they are found in different habitats and have different appearances.

Opossums are a common North American marsupial and will be easily recognized by anyone who has seen one before. These animals have been said to resemble large rats because of their long and bare tails and long snout. Despite sharp teeth and sometimes ferocious appearance, the opossum prefers to scavenge for food over hunting.

A common Australian and Brazilian marsupial is the possum. There are numerous species of possums, such as gliders, brushtails, and ringtails. The possum varies in appearance from the opossum because of its smaller size and softer features. Different types of possums will have vastly different appearances than other types of possums.

Many people believe that opossums and possums are the same because of how similar their names are. There is even more confusion because people will regularly interchange the names, not realizing they don’t refer to the same animal. Opossum can also be pronounced the same as possum, which leads to even more confusion when people realize they are two completely different animals.

There are several differences between the opossum and possum. Not only do these marsupials have different appearances, especially as adults, but they also have different native habitats, and react to predators in different ways. Even though the names are nearly identical, these animals are actually quite different.

Opossums and possums vary in both size and colors. The opossum is much larger, and is actually one of the largest marsupials found in North America. There is only one type of opossum in North America, called the Virginia opossum, and they usually range in size from eight to thirteen pounds.

They also have coarse and gray body hair, but some have been found to look more white or cinnamon colored. While the North American opossum is larger and coarse, the possum is smaller with more softer features.

The possum commonly found in Australia is smaller than opossums. There are several subspecies of possum so they can vary in size. Some possums weigh about an ounce, and other types can grow to be twenty pounds.

However, opossums are usually larger. Brushtail possums are one of the most common types of possums, and they reach an average size of five pounds. Possums also have golden brown fur that is not coarse, making them appear softer than the opossum.

Opossums and possums also have different native habitats where they thrive. Opossums are commonly found across North America, and appear in most of the United States.

They are also a common Canadian marsupial, but do not venture too far north into the country. Opossums can’t survive in the frigid cold of northern Canada.

The possum is native to China, New Zealand, and Australia, and will create dens nearly anywhere they can find. When it comes to nesting, possums are not picky, which is why they are considered a nuisance in some areas.

The North American opossum will use branches, leaf litter, rocks, and more to create their dens. They are often found in trees and shrubbery as well.

When it comes to the appearance of opossums and possums, their faces are a major difference. Opossums are easily recognizable by their long and white faces. They have long snouts, in addition to sharp ferocious-looking teeth.

These teeth make the opossum look like a dangerous hunters, but they prefer to scavenge for food. They also pose little harm to people. These marsupials also have dark black eyes.

Possums have smaller faces, and rounded-out bodies. Their snouts extend into a pink nose but are not as long as opossums. Their eyes are also lighter, usually appearing dark brown or even golden. Their faces are just one of the softer traits that possums have over opossums.

In addition to the faces, the tails of opossums and possums are recognizable differences. Opossums are known for a long, thick and hairless tail. The tail plus the coarse body hair of opossums makes them resemble large rats.

On the other hand, possums are known for having bushy tails. This is where the name of one of the most common types of possums comes from, the common brushtail possum.

This makes smaller types of possums more closely resemble squirrels or chipmunks. Possums can also use their tails to help them climb or hang from trees.

Opossums and possums have different reactions to possible predators. The opossum in North America is famous for playing dead, which is where the term “playing possum” came from.

They can stay like this for up to two hours, effectively deterring predators that get too close. Most predators that prey on opossums won’t go after one that already looks dead.

The smaller possums can also play dead, but they tend to be more curious. They have been known to approach people or other animals out of curiosity, which can put them in danger. The possums are not seen playing dead as frequently as their North American counterparts.

Some common predators of the opossum and possum are;

In addition to the various differences between the opossum and possum, these marsupials do share some similarities. They are part of the same class, marsupials, and have similar diets, lifestyles, and defense mechanisms.

You may also like:  Armadillos in Tennessee (Facts, Info, and Pictures)

The Virginia opossum is the most common and recognizable across North America. Various possums are found around Australia, including gliders, ringtails, and brushtails. The brushtail possum is actually the most common of any marsupial in Australia.

2. Both will “play possum” or play dead

The opossum and possum both will play dead to avoid predators, but the opossum is more likely to do this. An opossum can stay in a comatose state for a few minutes or a few hours, and this is an effective deterrent for most animals that prey on opossums.

The possum will also play dead, but are a more curious creature, and may approach people or other animals instead. It depends on the species of possums and how likely they are to play dead in the face of potential danger. These marsupials are the reason behind the famous phrase “playing possum.”

3. They have similar diets

While the opossum and possum have similar diets, they will vary based on their exact environment. These marsupials will scavenge for food on the ground and in trees. When near neighborhoods they are known to search through trash for food.

They can also hunt for food, and will often feed on insects, snakes, or even birds. They have been known to sneak into bird or chicken nests after eggs as well. Opossums have become a common pest on farms in North America where they will regularly go after chickens when given the chance.

Common parts of the opossum and possum diets are;

The opossum and possum both lead nocturnal lifestyles, preferring to be active at night and sleep during the day. During the day these marsupials will stay in their dens, and they venture out at night to explore and hunt. Not only can being nocturnal protect them from the dangers of summer heat, it can also keep them safe from the threats of people and other predators.

Coming out only at night also gives opossums and possums the opportunity to scavenge for food, especially near areas with a lot of human activity. However, a nocturnal lifestyle will also put these marsupials at risk of being attacked by other nocturnal animals, like coyotes, owls, or raccoons.

While the opossum and possum share some similarities, especially in their name, they have even more differences. These marsupials thrive in different habitats and environments and look quite different from each other.

There is one main opossum, the Virginia opossum, found spread around most regions of North America. They stay out of northern Canada where temperatures are too frigid. There are multiple common possums, like gliders and ringtails,  found in Australia and the rest of their habitats.