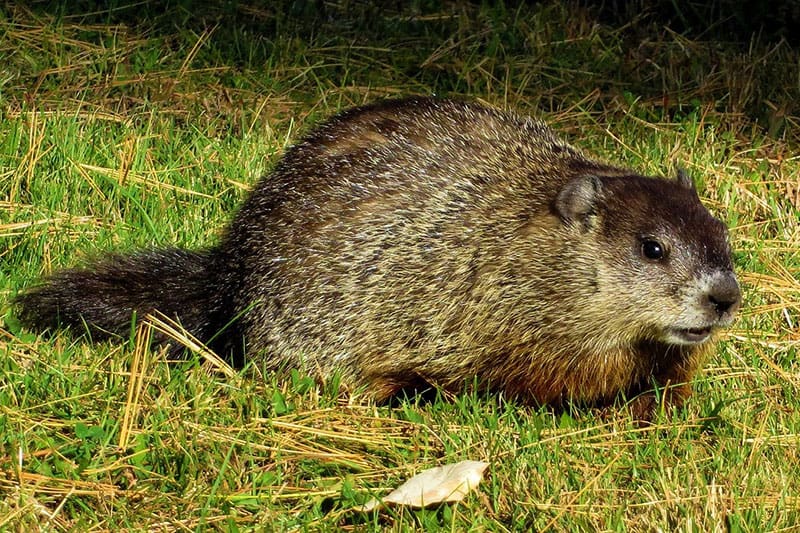 Beyond the widely spread groundhog’s ability to forecast weather, and celebration of Groundhog Day in the United States and Canada, only a few care about this mid-sized furry mammal. Their habitats and general lifestyle has always been a point of debate because they are relatively elusive. So we’ve written a detailed article that will answer the question “where do groundhogs live?”. We will explore their habitat, geographical location, groundhog burrows, and their general lifestyle.

Groundhogs are large rodents in the Marmot family with widely known destructive behavior, and burrowing prowess. They are also known as a “woodchucks” and often called whistle pigs. They live underground by digging tunnels/holes called burrows. 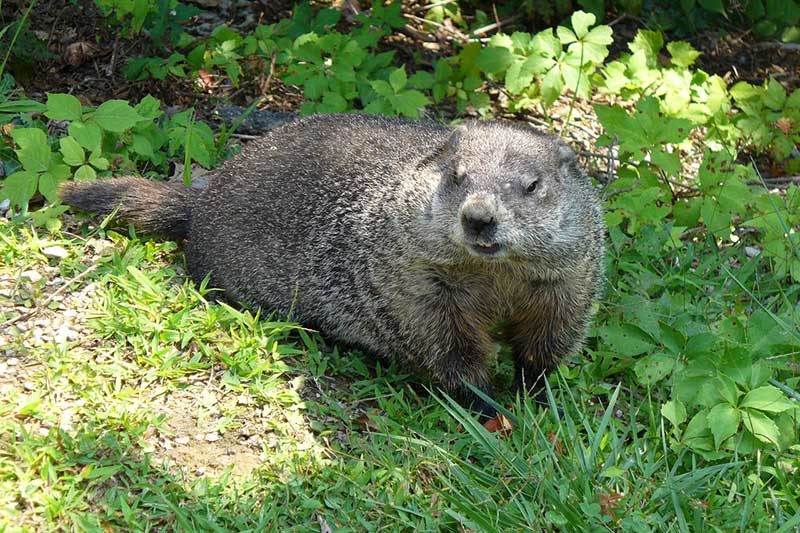 These ground squirrels are mostly found in the eastern parts of the United States, mainly in an open field or well-vegetated meadow. They spend more time underground in complex burrow system than anywhere else.

In these burrows are large tunnels that contain chambers such as rooms with many holes linking them together.

A groundhog weighs 12 to 15 pounds and can reach 24 inches in length. It has two sharp incisors at the front teeth that are used for biting leaves that they feed on. They are impressive builders; a groundhog can excavate over 700 pounds of dirt when making its burrow.

Along with vegetation, they also eat grasshoppers, snails and other small animals. Most times, groundhogs are considered as agricultural pests as they pose problems for farmers by eating up their plants.

Where Do Groundhogs Live?

Groundhogs are builders and live in burrows built by excavating holes and tunnels by moving dirt. These burrows are of two types; one built for summer and the other for the winter. Inside these burrows are huge chambers that are linked together.
Each of the chambers, also known as nests, has a specific function. For instance, there is a separate chamber that groundhogs pack their waste into. A groundhog hibernates during the winter period and stays inside its burrow for months. This burrow serves as its abode during the night and also during hibernation.

A groundhog is a lowland creature and can be found throughout most of the eastern United States. You will see them more in the eastern and central United States, including some regions of Alaska. They also roam freely in many parts of Canada. Any transitional area serving as a meeting point for forest/woodland and a well-vegetated meadow or open field is an ideal location for groundhogs.

As stated earlier, groundhogs love woodlands close to open field. Their typical homes are burrows that can be 1.8 meters deep or 6 meters wide. They prefer an open area that will allow them to feed on vegetation and other smaller animals. 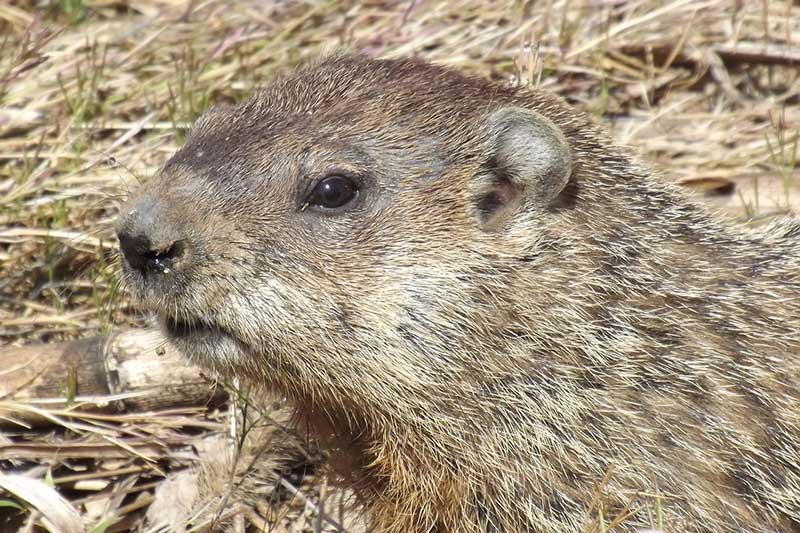 Groundhogs burrows are of two types: One for the summer and another during the winter. In a summer burrow, there are multiple openings about 10 to 12 inches in diameter and are always 20 feet away from each other. Summer burrows are more evident than winter burrows, and that is why it has only one opening which can be found in tightly compacted cover areas.

In each burrow are multiple nests containing a leaf litter substrate that provides warmth and comfort for them. They take care of their nests very well by regularly changing the leaf litter. The primary nest is situated at the end of the main tunnel, and the auxiliary nest is built anywhere in the tunnel system.

Burrows serves as a means of protection for groundhogs. Rarely do they stray more than 150 feet from their burrows. They rely on these burrows for protection against predators and blustery weather.

The burrow has typically one entry but up to five exits, specially designed for a secure means of escape from predators.

W. J Schoonmaker once excavated eleven dens. He found out that the longest burrow was 24 feet plus two short side galleries. Burrows openings are always shallow and are about 10-12 inches in diameter. These holes are easy to recognize as they are 9 inches and 23 centimeters wide. The entrance typically contains pile of dirt and rocks.

According to W.H. Fisher who investigated nine burrows, he founded that the deepest point is forty-nine inches down while the longest plus the side galleries are forty-seven feet, eleven- and one-half inches.

How Deep Is A Groundhog Burrow?

The opening of a groundhog burrow is between 10-12 inches in diameter and can be easily seen by a pile of dirt at the entrance. A groundhog burrow is always about 6 feet (1.8 meters deep), and its wideness is 20 feet (6m). The main nest chamber is situated at the end of the burrow.

How Long Does It Take for A Groundhog to Dig A Burrow?

There’s no precise amount of time for a groundhog to complete its burrow digging. A groundhog starts building its burrow a few months after its birth in preparation for separation. The burrow is neither always deep nor wide at first but gets deeper over time as the groundhog grows matured.

Take a look at this video for a peek inside a groundhog, or woodchuck, burrow

How Many Groundhogs Can Live in A Burrow?

How Do I Find A Groundhog Burrow?

Groundhog burrows are easy to identify. These burrows are always located near the edge forests that are closer to open land. Burrows are also built near fences as groundhogs are lazy rodents and will only dig where they can excavate the earth efficiently. A large mound of dirt is one of the most apparent signs of a burrow. Depending on the weather, summer groundhog burrows can be found mostly on the grassland. 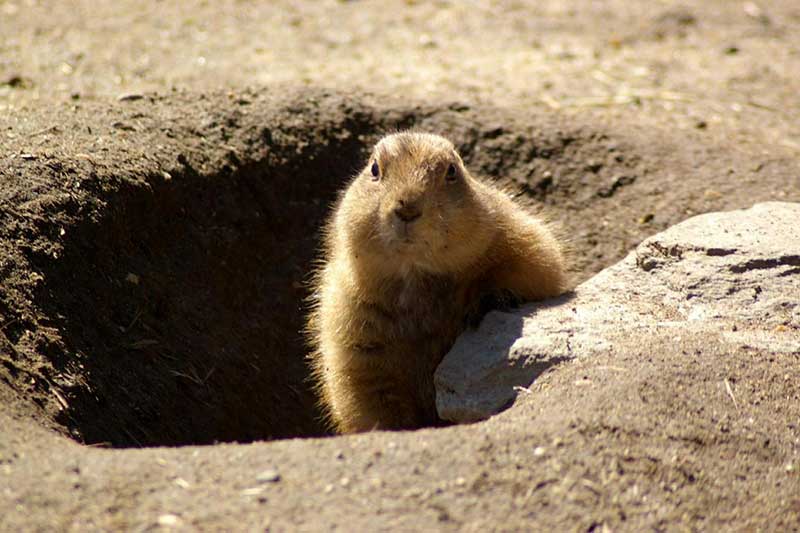 What Do You Call A Group of Groundhogs?

There are no specific names attached to a male or female groundhog as they are solitary or non-gregarious animals. Thus, there is no name attached to their group unlike other social animals. Marmots, the family that groundhogs belong to, in general are very social animals and do live groups. Groundhogs however are the outliers and are very lone animals that do not congregate like their cousins.

The cute faces on groundhogs made it clear that they are less dangerous. Though, they possess two sharp incisors that can be used to bite when defending themselves against any external attack. Only big dogs do chase groundhogs as smaller ones wouldn’t dare because of the standing posture that might frighten them.

Is It Bad to Have A Groundhog in Your Yard?

Groundhogs might be dangerous to your garden. They are vegetarians and feed on leaves and grasses. Their love to set up around a farm field may be detrimental to the farm as they might build their burrows near dug fence posts or near planted trees which will weaken the fence or roots of planted trees

It cannot be concluded whether the Groundhogs are aggressive or not because of the physical spacing between them. But it is noticeable that they are good defenders whenever their burrows are threatened. Whenever this happens, they defend with their claws and their two large incisors. Most times, they stand erect on their hind feet and watch for danger.

If there is a danger, they use a high-pitched whistle to warn others. The conclusion that can be drawn about Groundhog’s aggressiveness is that they only retreat when their burrow is threatened and are only agonistic and territorial among their species.

Yes, Groundhogs are among the wild animals with the highest number of diseases. They are mostly affected with rabies, diarrhea, tularemia, ticks and lots more. Also, they carry some bacteria and fungi on their body as they go. If you get in close with them or handle them, they can transfer such disease organism to your body. Let’s talk about a few of these diseases.

Diarrhea is widespread among wild animals including groundhogs. It’s not a disease but rather a symptom of a larger issue. It comes with several other symptoms such as frequent discharging of bowels, and it also shows symptoms of gastrointestinal infection. It can be easily be noticed on their body through signs and weaknesses.

Now that you are familiar with the life and habits of groundhogs, hopefully the question of where do groundhogs live has been satisfied. What do you find most interesting about these weather forecasting mammals?