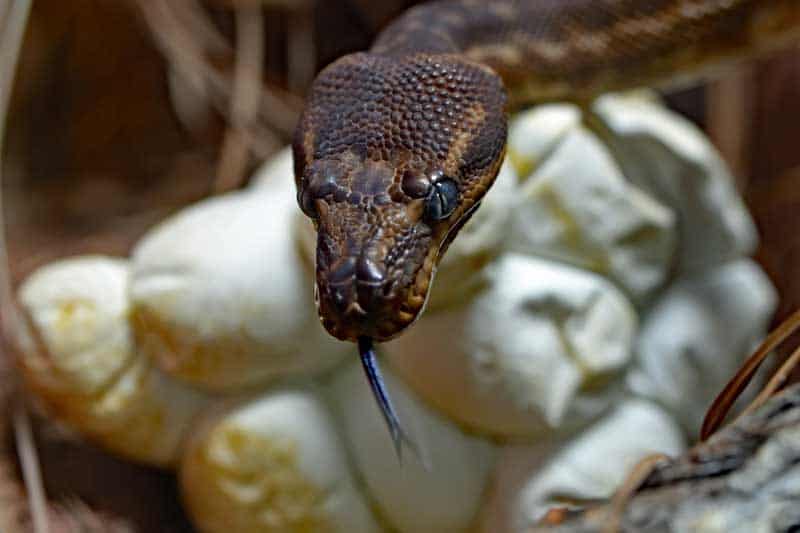 Overtime, humans have found a way to make use of nearly all parts of the animals we eat. This includes the eggs of animals too! While you may be used to eating chicken eggs, humans also eat the eggs of ducks, quail, emus and fish (caviar) to name a few. You may have wondered if humans can eat the eggs of other egg-laying animals, which may have left you to wonder if you can eat snake eggs.

While the thought of eating snake eggs may be strange to some people, it’s important to remember that what we deem tasty is probably wildly different than what people across the world like to eat. In this article, we will dive into information about snake eggs, eating snakes’ eggs, and where snakes and their eggs are a delicacy.

Can you eat snake eggs?

Yes, you can eat snake eggs as long as they are cooked correctly. It’s not much different than cooking and eating a typical chicken egg.

Like Chicken eggs, snake eggs are also nutritious and high in protein. They just aren’t quite what you first think of when you think of having eggs for breakfast. Though you’ll learn in this article that many Asian countries do eat eggs, for breakfast and other meals.

No, snake eggs are not poisonous. There is a chance that if you eat one that hasn’t been cooked, that it could give you some stomach troubles, but no more than eating an uncooked chicken egg.

Even the eggs from venomous snakes are not poisonous. If you eat a venomous snake egg, any venom that is inside the egg will be absorbed in your stomach as additional protein.

There are several places where snakes are plentiful, and the people there have incorporated snakes (and their eggs) into their diet. Some of those countries are:

In Vietnam, snakes are a very popular delicacy. The blood is used to make snake wine to drink, which is supposed to be an aphrodisiac and the meat of the snake is used to make several dishes. Snake eggs are also cooked and eaten but probably less so than the meat of snakes.

Probably less so than in Vietnam, snakes are considered a tasty meal in Thailand. Supposedly, Rat Snakes and Cobras make for the tastiest snakes.

In Indonesia you can buy shots of cobra blood which are rumored to improve performance in the bedroom and help with fertility. The gall bladder of cobras is consumed and supposedly is able to cure a range of ailments.

Snake soup is a traditional meal in China and has been eaten for centuries for it’s supposed healing properties. Snake soup is especially popular in cooler parts of the country where it is eaten to warm the body from the “inside out”. Snake soup is made with several different snakes including Pythons, Water snakes, Cobras, and Kraits.

Highly venomous Sea Snakes are used to make a traditional soup in Japan where these snakes are eaten (with their skin!) in a soup. This meal is a special meal and is typically eaten by royals, famous people, or for very special occasions. 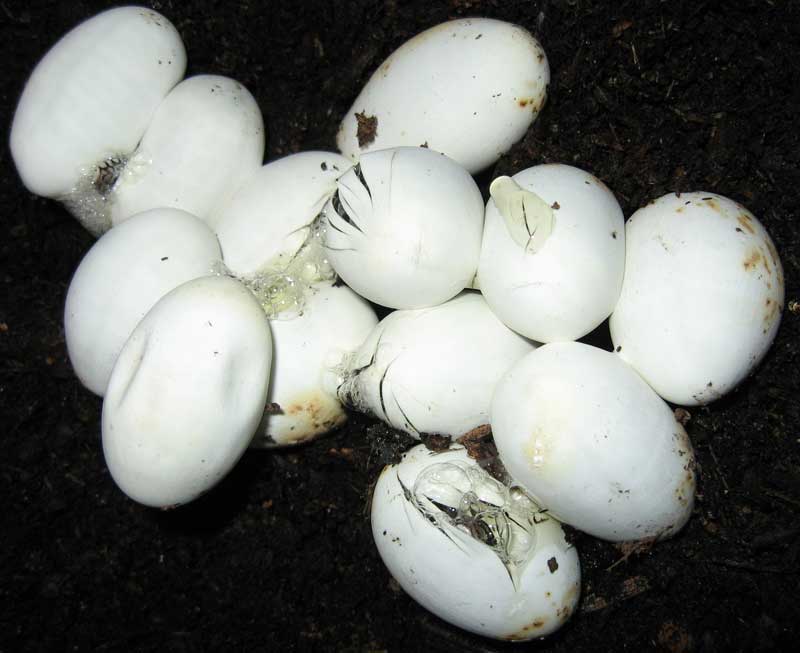 Snake eggs are unique to other egg laying animals (mainly birds) as they are fairly oblong or oval shaped. Some snake eggs are long and thin while other snake eggs are more traditional “egg shape”, but this depends on the species.

Snake eggs are typically off white to light yellow but may brown over time. Snake eggs are often clustered together and may even stick together in a large clump.

Snake eggs differ from bird eggs as they are much softer and lack the hard shell that is found on most bird eggs. They almost feel like a liquid-filled sac. The surface of the egg is slightly textured rather than completely smooth.

If you pick up a snake egg, you may feel it squish in your hand. Snake eggs are quite fragile and disturbance to them should be limited.

Why are snake eggs soft?

There doesn’t seem to be one clear reason why snake eggs are soft, but one hypothesis is that the softness of the shell allows for moisture to be transferred across the egg and membrane.

Also, because snake eggs are soft, snakes are able to hold more eggs in their body and then lay them where they will expand slightly. This helps to maximize reproductive output for snakes. More eggs = higher chance of the snake passing on its genes.

Why are snake eggs stuck together?

When snake eggs are laid, they are wet which helps them to stick together. Snake eggs are often stuck together to help them maintain moisture and temperatures within the egg clump, or egg mass.

Do snakes sit on their eggs?

Most snakes do not provide any parental care after they have laid their eggs. Because snake eggs are softer, sitting directly on top of them could be dangerous for the eggs. However, some snakes will wrap around their eggs and sit with them all the way up until hatching! This is called brooding.

Do snakes protect their eggs?

In most cases, no. Reptiles are typically very distant mothers, which allows them to conserve energy and resources in order to lay more eggs, more often.

However some snakes like the Burmese Python or other species of Pythons will wrap around or brood their eggs from the time they lay the eggs up until their eggs hatch. This means that these snakes stay in the same spot for up to 2-3 months protecting their eggs.

King Cobras are the only species of snake known to actually build a nest and then protect their nest. However, King Cobras do not stay with their eggs for the entirety of the incubation time.

To wrap things up, you can in fact eat snake eggs. That being said, not all snakes even lay eggs. For more information about snakes laying eggs (or not) check out this article all about snake reproduction here.

Snake eggs are different than other eggs typically eaten by people in texture, shape, and color. The taste and texture of snake eggs may not be for everybody. However, many cultures have made use of snakes and their eggs in their diets which has become quite the attraction for some of the more open-minded, adventurous travelers.