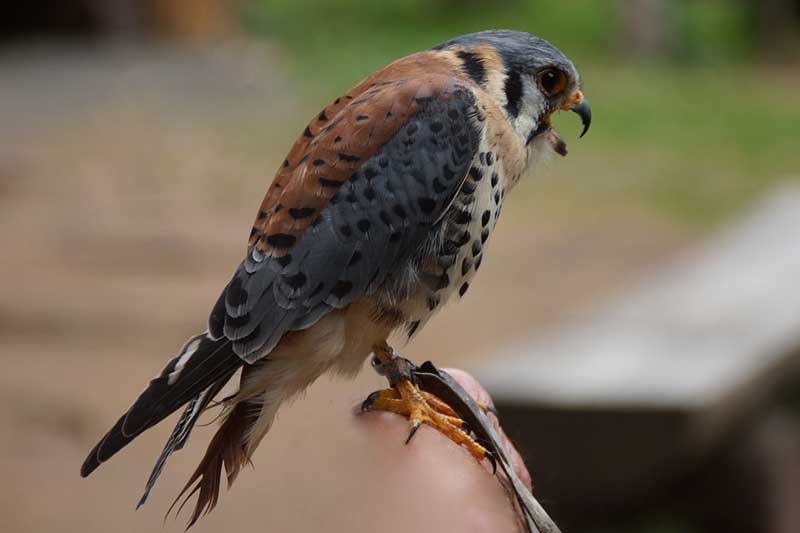 The American Kestrel is the most common falcon in North America. This small but mighty predator may not be impressive in terms of size, but it makes up for it with its other attributes. What makes the American kestrel so special? Keep reading to learn some interesting facts about this pocket-sized raptor.

1. The American Kestrel is the smallest falcon in North America

Varying from about the size of a blue-jay to the size of a mourning dove.  The American kestrel is the smallest of its North American relatives. It shows the differences in size typical among birds of prey, with the females being slightly larger than the males.

Male and female Kestrels can also be differentiated by color. Females have rusty brown wings, while the wings of males are slate blue. Males have one black bar on their tail feathers, and females have several.

3. They hunt as a family

When young kestrels first begin to hunt, they are accompanied by their parents. This gives young birds an opportunity to become skilled hunters before they leave the nest. This is important since many young kestrels die of starvation. Only around 30-30% survive into adulthood.

Unlike other species, there isn’t a lot of bickering among your kestrels. Siblings often perch together and fly together, before leaving the nest.

The growing nestlings eat twice as much food in a day as an adult bird! This means these tiny nestlings are eating 2 to 3 mice or voles a day, which is especially shocking considering their tiny size.

The female will stay with the chicks during the first 12-14 days after they hatch to help regulate their body temperature since they are unable to do this on their own and to protect them from predators. During this time the male will bring food for her and the nestlings.

5. Kestrels do not build nests

Kestrels nest in cavities in trees abandoned crows nests, rock crevices, and any other nook or hollow they can find, whether natural or man-made. They do not have the ability to create their own holes, so they either need to find an unused one or evict the current resident. American kestrels have been seen chasing bluebirds and squirrels out of their nests.

Unlike some birds, kestrels do not keep a neat nest. When they defecate, they typically do so up against one side of the nest. The nest also fills with leftover scraps of fur and bones from the nestlings. Despite the messy nests, kestrels will return to the same nesting sites year after year.

6. Kestrels are popular in falconry

Due to their small size, American kestrels are often used by beginners to falconry. They are also becoming popular among more experienced falconers. They settle quickly and have appealing personalities. Along with the Red-tailed hawk, kestrels are the only birds allowed to be used by apprentice falconers in the US.

You may also like:  20 Interesting Facts About Burmese Pythons

The practice of using a small falcon like a kestrel in falconry is different from using a larger bird like a hawk. They are generally used to flush birds, like starlings and sparrows. The practice using a small bird is known as micro-falconry.

The number of voles in an American kestrel’s territory is directly linked to the success of that year’s breeding season. In a year with very few voles, kestrels mat lay few to no eggs. In years with plentiful voles, there will be more fledglings. Voles are the primary food source for the American kestrel during the winter months when their other prey is scarce.

In warmer months kestrels have a more varied diet. They eat insects, mice, worms, lizards, frogs, and bats. Even though they’re small, they’re efficient hunters. They have even been seen killing and eating squirrels.

American Kestrels are slowly making their way onto the threatened list. Their numbers have slowly been declining, and scientists are unsure why. There may be a link between insecticides and the declining numbers of kestrels. One theory is current insecticides are leading to reproductive failure.

Their numbers aren’t the only thing declining. The average bodyweight of the kestrel has gone down by about 5 grams. This may be because of declining prey as humans encroach further into their habitat. With urbanization, kestrels are losing hunting ground and nesting sites. To encourage the proliferation of kestrels bird lovers are being encouraged to put up nesting boxes to attract kestrels that are losing their nesting sites.

Kestrels form monogamous pairs, and will often stay together for several years. The male gifts the female with food, and will pick out a nest site, with the female making the final decision. Some kestrel populations do not migrate, and the birds stay around the nesting site the entire year.

American kestrels usually lay between 3 and 7 eggs. The baby birds fledge in about 30 days and will leave the nest and become independent about 30 days after fledging.

To save food for later, or to keep it from being stolen, kestrels will hide their extra kills. They will hide it in tree roots, in clumps of grass, or in tree cavities. Caching is a common behavior among predators, to ensure that they have access to food if there is suddenly a lack of prey.

11. American kestrels hunt from a perch

Kestrels area common sight in rural areas, perched on utility poles. This is because of their hunting behavior. They need to be at a height to survey a large area, and spot movement from any potential prey. They may shift from perch to perch a few times throughout the day. Kestrels will occasionally hover to find prey in areas with no suitable perches. Despite their preference for perching, kestrels have mastered hovering, and are one of the species that can hover the longest. 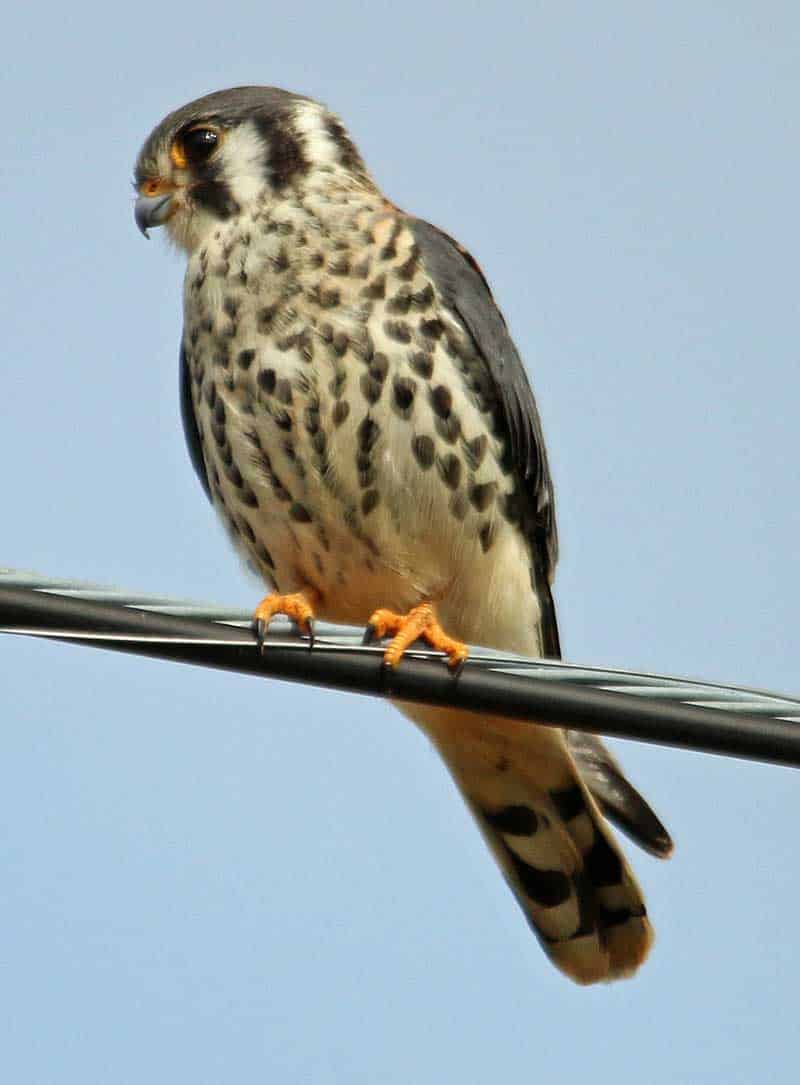 Kestrels usually snatch their prey from the ground and return to their perch to consume it, unless they are taking it to a cache. They will eat worms and insects on the ground or in the air, but larger prey, like mice and voles, are taken back to a perch.

12. Males migrate farther than females in the winter

This may be because females finish molting sooner than males, and get a head start. Female American Kestrels leave for their winter homes about 11 days before males. This means that often female kestrels have found the best habitats, forcing the males to find less ideal areas to spend the winter.

Female kestrels tend to choose open areas to winter, forcing the males to make do with less appealing wooded areas. Not all Kestrel populations migrate. Those with northern breeding grounds migrate, while those living in more southern areas stay put.

Kestrels in the wild only survive about 5 years on average. This could partially be due to being a small raptor, and the target of larger predators such as owls and hawks. American kestrels have 2 black eye-spots on the backs of their heads to help confuse and deter predators.

The oldest kestrel who was banded and then found again in the same state managed to survive to at least 14 years old. This fellow was originally caught and banded in 1987 in Utah and was found again in 2001. Kestrels in captivity typically survive to around 17 years of age.

14. There are 17 sub-species of American Kestrel

American kestrels are wide-ranging, extending from North America, all the way into South America. The sub-species are very distinct, with variations in color and in markings. The Cuban sub-species lacks facial markings and has a dark head, while the Caribbean birds s do not have spots or bars. Sub-species can also be identified by size variations and by a difference in vocalizations.

In the past, they were referred to as sparrow-hawks, not to be confused with Eurasian Sparrow-hawks. and they also have affectionate nicknames such as grasshopper hawk, and Killy hawk.