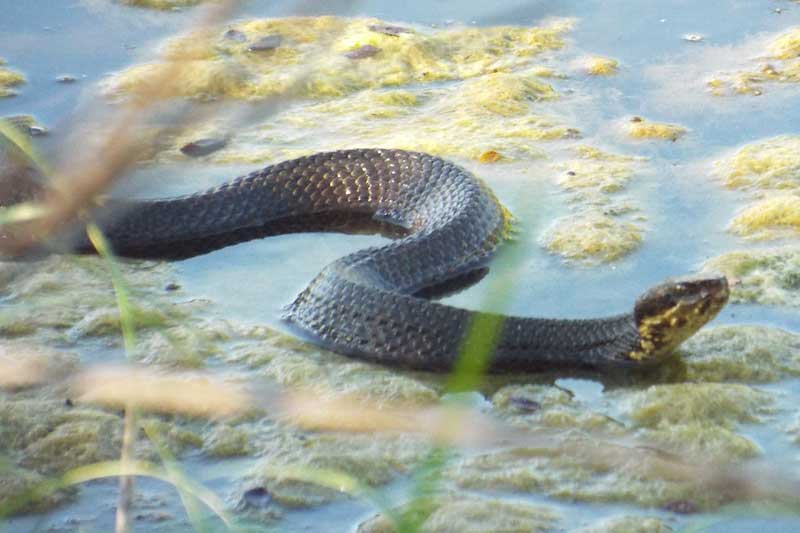 Within Georgia, there are 41 native species of snake. Of those, only six are venomous. These can usually be identified by their triangular-shaped head, with the exception of the coral snake which instead has vibrant and easily recognizable coloring. This is a list of those six venomous snakes in Georgia and how you can identify them to keep you and your family safe.

First, let’s start off by looking at the 3 species of rattlesnakes found in Georgia.

The Eastern Diamondback Rattlesnake gets a bad reputation as deadly and aggressive, but the reality is that they’re highly averse to human contact and only act in defense – most bites occur when humans taunt or try to capture or kill them. They can accurately strike at up to 1/3 their body length and are the largest venomous snake in North America, as well as the most strikingly adorned.

The Eastern Diamondback gets its name from its pattern of yellow-bordered, light-centered black diamonds on its back. It is a venomous snake and has a potent hemotoxin that can cause tissue damage. This bite can be extremely painful, but bites rarely result in death as antivenom is widely available throughout the snake’s range.

These snakes can be most easily identified by their iconic rattle on their tail that they use as a final warning. These rattles are made of loosely attached hollow segments, and snakes add a new rattle with every shedding of their skin. If you come across an angry rattler, as they live in dry pine flatwoods, sandy woodlands, and coastal scrub habitats in Georgia, your best bet is to just back away and try not to disturb them. They don’t want to bother you and would rather just lay in wait while camouflaged while you back away.

The Timber Rattlesnake is one of North America’s most dangerous snakes due to its long fangs, impressive size, and high venom yield. However, like the Eastern Diamondback, this snake will only attack if provoked. They give plenty of warning with their distinctive rattle, and deaths from their bites are incredibly rare. They exist all across the United States and have four different venom patterns depending on region. Within Georgia, their venom is neurotoxic and hemorrhagic, so it’s very important that once bitten you go to the hospital immediately.

Timber Rattlesnakes have been reported in Georgia since the first settlers. Its image actually appears on 1778 $20 bills and was a symbol for American aggression and rebellion. They’re typically protected in these regions as well, as they’re natural exterminators and can clear farms of rats, mice, and even other snakes. When out walking, be sure to watch out for areas with fallen logs, as this is their most common waiting site for animals to walk by.

The Pigmy Rattlesnake is found throughout all of Georgia other than the very northernmost tip. They’re most common in the Coastal Plain area, but it isn’t unheard of for them to inhabit the Piedmont region as well. They prefer areas near water sources, such as creeks, marshes, and swamps. They spend most of their time well-hidden among leaf litter and can be very hard to spot.

They’re often encountered crossing roads on summer evenings. The most dangerous part of this snake is that while it does have a rattle to give plenty of forewarning like most rattlesnakes, because of its size it can be difficult to hear, so always keep your eyes peeled when around loose leaf piles and other similar areas.

Pigmy Rattlesnakes can be very vividly colored. Those in Georgia are most commonly orange or red with large black or brown spots on their back, although melanism is very common and they are occasionally all black. These spots are clean and well defined. Some species further into South Carolina can even be lavender-colored, which thankfully helps this snake stand out to humans even more and is more easily avoidable.

The Eastern Coral Snake is one of the most easily and quickly identifiable of the venomous snakes in Georgia. They’re slender, mid-sized snakes with a smooth appearance and bright red, yellow, and black rings. A common way to remember is “red and black, friend of Jack; red and yellow, deadly fellow”, as the also native King Snake has similar markings as a way to deter predators. This venomous snake is especially unique in that it’s the only American venomous snake with fixed fangs in the top of their mouth.

The Eastern Coral Snake is found in scattered areas in the Coastal Plains of Georgia and are relatively elusive snakes. They’re most often encountered in the spring and fall, as the summer heat can be too much for them and the winter too cold. These snakes are very secretive and like to burrow, so when you’re out in the woods it’s important to carry a walking stick to check leaf piles for any of these snakes. Unlike the rest of the snakes on this list, the Coral Snake doesn’t have a diamond-shaped head, so be on the lookout and give a wide berth when possible no matter what.

This snake is also known locally as a Water Moccasin, but they get the name Cottonmouth from the white coloration on the roof of their mouth. They’re semi-aquatic, meaning they’re found in land and water. They’re typically found in the Coastal Plain area, but it isn’t uncommon for them to be found in metro Atlanta as well.

They’re found in nearly all freshwater habitats, but are most common in cypress swamps, river floodplains, and heavily vegetated wetlands. Be very careful if you’re going to attempt to kill a Cottonmouth though, because not only are they quick, but many other species of native snakes resemble them and it’s currently illegal to kill non-venomous snakes in Georgia!

The Southern Copperhead is the most likely of these venomous snakes to be found in the metro Atlanta area. They’re a large, heavy-bodied snake with a large triangular head and, as the name suggests, are usually copper-colored with darker hourglass-like crossbands.

Copperheads are responsible for the majority of snakebites in the Southeast each year, mostly due to their proximity to urban and suburban areas. It’s also the most likely to strike out with very little warning as they are generally aggressive and can strike multiple times. They’re found in a wide variety of natural habitats as well, proving as comfortable in dry, rocky areas as they are in cool, forested areas or wetlands. Like with all venomous snakes on this list, if you see one be sure not to engage and leave them alone as best you can.

4 species of venomous snakes in Tennessee