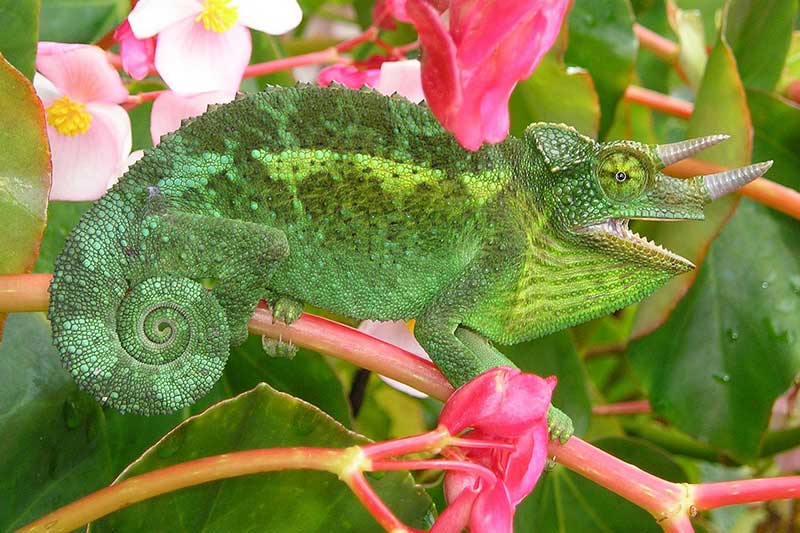 Animals are constantly amazing us with the abilities they display. From the incredible sense of smell demonstrated by dogs to the punch of a mantis shrimp which can break 1/4 inch glass. When it comes to the natural abilities of most species it’s clear that if it weren’t for our large brains, humans would be at a severe disadvantage if left alone in nature.

Some of the most unique abilities are demonstrated by reptiles. From the ability of some to move their eyes independently, the specially hinged jaws in others, and most amazing of all, the ability to blend into their surroundings by changing color. Reptiles that can change their colors are a fascinating example of the ways nature has directed species to evolve and adapt.

9 reptiles that can change their colors

There are 171 known species of chameleon. They all possess the ability to drastically change their color. Chameleons accomplish this by adjusting iridophore cells in the top layers of their skin. They use this ability to communicate, show dominance, accept or reject mating advances, and indicate pregnancy. Changes in temperature or emotion can also trigger a chameleon to change color.

Though they are not known for it, geckos are another reptile that can change color. There are over 2,000 species of gecko, but not all of them have the ability to change color. Unlike chameleons who can be very flamboyant with their color changes, geckos change color to blend in to their surroundings to hide from predators and stay hidden to aid in catching prey.

This dainty non-venomous snake is unique for several reasons. It is the only member of its genus and is found exclusively on a small island off the coast of Mauritius. They slowly change their color over a 24 hour period. It is dark during the day when it is more dormant, and slowly lightens in color until the evening when it is active. The darker coloring it shows during the day may be to help it absorb more heat from the sun during the day.

Green anoles are another example of a reptile that can change color.  A hormone secreted by the pituitary gland triggers the color change from green to brown. This can be in response to temperature fluctuation, their background, or their mood. In warmer weather, the Green anole tends to maintain it’s green color, preferring to go brown when the temperature dips below 70 degrees F.

This is a more recently discovered species of snake. Discovered in 2006, not much is known yet about this snake, but it can change from a reddish-brown to white within a few minutes. It is thought it may be a warning or defensive behavior. Due to this snake’s remote habitat in the Heart of Borneo, it may be some time before the reasons behind its ability to change color are understood.

This reptile changes color, but not in the way chameleons or the other reptiles on this list do. Green tree pythons change color as they mature. Going from yellow or red, to their final adult shade of green, and occasionally blue, in a matter of months. This change occurs, because as the snake matures it slowly begins to change its habitat from the leaf litter on the forest floor, to the canopy of the trees where it will live as an adult.

Some of the reptiles that can change colors do so for a short time for a specific purpose. The male painted terrapin changes color during its mating season to attract females. It changes from a dark brown to bright white, red, and green, including its shell. Terrapins have two breeding seasons, so this color change will occur twice a year.

The Papuan python is well known for being able to change its color. It is typically an olive green but can change to yellow, or black, and often displays two colors at once. The reasons this reptile can change colors are unknown, though it has been suggested this happens when the snake is agitated. Like many other snakes that are capable of changing color, the mechanism through which this happens is unknown.

The Pogona group of lizards, more commonly known as bearded dragons, is made up of 8 species. They do not display the dramatic color changes shown by some of their cousins, but they do have the ability to shift their color. Their backs may darken in order to absorb more heat, and they are able to change the colors of different parts of their bodies, typically their beards, to provide social cues to other bearded dragons.

Bearded Dragons are also among the most popular pet reptiles in the exotic pet trade and can make wonderful companions if you take care of them properly.