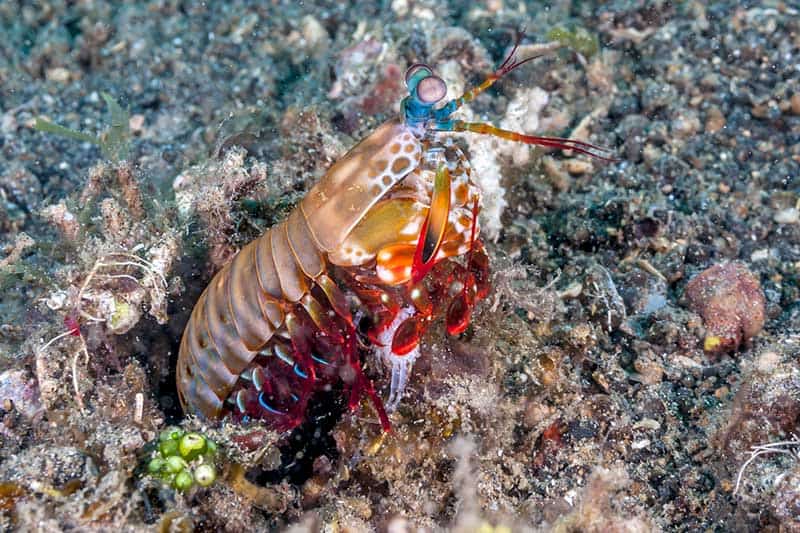 Mantis shrimp are beautifully colored creatures that you can also associate with being “deadly” due to their unique defense mechanism. These pretty yet violent animals have plenty of weird and interesting facts around them, that might just surprise you. Read on to learn facts about mantis shrimp and how they’ve inspired humans.

Here are 12 remarkable facts about mantis shrimp, including how they got their names, their record-breaking skills, and more!

First off, despite their names, mantis shrimp aren’t actually shrimp. They are stomatopods, which are carnivorous marine crustaceans and distant relatives to crabs and lobsters. However, since most mantis shrimp are between 2 to 5 inches long, their small size makes them comparable to shrimp.

Mantis shrimp have big buggy eyes on stalks that come out of their heads and paddle-like flaps on the sides of their heads, similar to ears. These cartoon-looking animals also have spines decorating their tails and come in a variety of dazzling colors. Most mantis shrimp are multi-colored and range from pink, orange, and green, to electric blue.

3. They pack a record-breaking punch

Mantis shrimp hold the record for the animal with the fastest punch worldwide. They have one of the fastest limb movements, striking at around 50 miles per hour. That’s an acceleration faster than a .22-caliber bullet! Their punch delivers around 160 pounds of force, which is hard enough to break glass and smash through the shells of their prey.

Their strike also generates so much heat it can boil the water around them. For a brief moment, the surrounding water reaches temperatures equivalent to the Sun’s surface. This also causes small flashes of light to emit upon impact.

The mantis shrimp punch occurs through a process called cavitation. This is when the lowered pressure in the water around them creates a bubble that collapses and heats up hotter than the Sun’s surface. The cavitation bubbles they produce will stun their prey.

Using technologies that mimic cavitation, the food industry has put this process to use for various things. This includes using cavitation bubbles for:

With the ability to deliver such a powerful punch, it’s easy to wonder how mantis shrimp don’t injure themselves. Well, they are sturdier than they look. Underneath their shell, they have layers of what is called “elastic polysaccharide chitin” that act as shock absorbers to protect them.

This natural protection is so effective that scientists have been researching it to create new carbon fiber materials for military body armor. The material also has potential use in aircraft panels.

6. Some species are monogamous

Besides their aggressive hunting and defensive measures, mantis shrimp also have a romantic side to them. Some species are known to be monogamous, staying with only one partner for up to 20 years. You’ll see the pair living together in the same burrow and helping each other take care of eggs.

This form of social monogamy is also for practical reasons. It allows them to live outside reefs where it’s safer from predators without constantly needing to search for a new mate.

7. Their name is linked to the praying mantis

The mantis shrimp actually get their name because they kill prey similar to praying mantis (Mantis religiosa). Both animals use their folded forelimbs as weapons to attack. However, the mantis shrimp definitely packs a more powerful punch. Their forelimbs also come from the sides of their mouths.

8. They see a wide range of colors

The mantis shrimp eyes are incredibly complex, allowing them to see a wide variety of colors, including light wavelengths in the ultraviolet (UV) spectrum. Their eyes contain 12 light-sensitive receptors, letting them see the world in a rainbow of vibrant colors. In comparison, humans only have three light-sensitive cells for seeing blue, red, and green.

Their eyes also roam independently, making them see and react to their surroundings quicker. This skill, combined with the range of colors they see, makes them excellent predators.

9. You need shatterproof glass to keep them

Mantis shrimp aren’t popular home pets because their punching abilities allow them to easily crack or shatter aquarium glasses. If you want to have a mantis shrimp as a pet, you’ll need to purchase shatterproof acrylic glass. Additionally, you have to keep them alone or they might attack other fishes or animals in their habitat.

10. Some are smashers, others are spearers

There are hundreds of species of mantis shrimp around the world, including the peacock mantis shrimp (Odontodactylus scyllarus). However, you can typically categorize the different species into two groups: smashers or spearers. This categorization comes from the type of claws they have.

Some mantis shrimp have club-like claws they use to smash their prey like hammers. The blunt force helps them break their prey’s shells. Others have spear-like claws which are sharp and barbed. They use these claws to stab and slice their prey.

11. They are eaten in some countries

Yes, they are powerful predators. However, humans also eat mantis shrimp in some places, including Vietnam, the Philippines, Japan, China, and Hawaii. Their flesh tastes more similar to lobsters than shrimp and you can find them in a deep-fried dish with garlic and chili.

Besides humans, other natural predators of the mantis shrimp include larger sea animals such as:

12. They’ve been around longer than dinosaurs

Stomatopods have evolved separately from other crustaceans for nearly 400 million years. That’s around 170 million years before even the first dinosaurs appeared. Their bizarre, yet inspiring, biology has also led to scientists nicknaming them the “shrimp from Mars.”