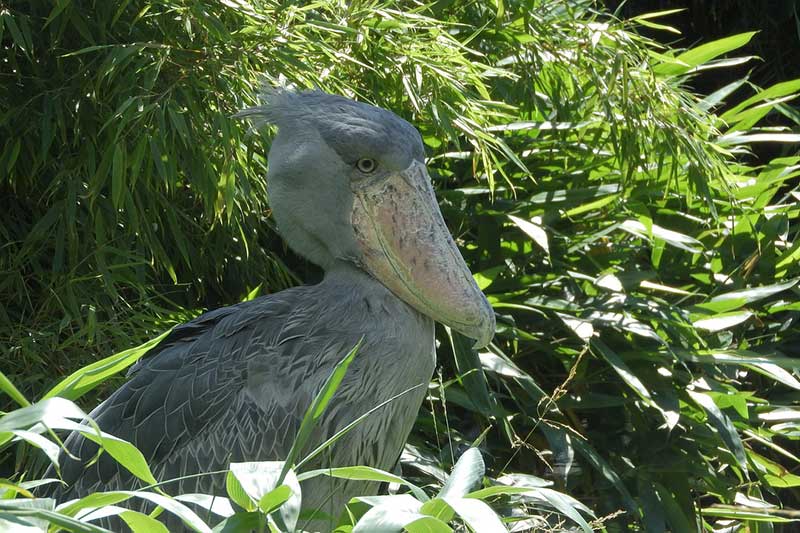 A large and dangerous bird, the shoebill stork, is an interesting-looking animal with plenty of interesting facts about them. Their scientific name Balaeniceps rex translates to “shoebill, whale-headed stork,” and if you look at their head, you can probably tell why. Let’s learn more about these odd-looking, rare, and aggressive birds with 14 interesting facts!

From where they live and how they hunt to ways they cool off, here are 14 facts about shoebills. Some might come as a surprise to you!

You can find shoebill storks in East Africa, especially in marshes and freshwater swamps of counties like Uganda, Zambia, Sudan, Kenya, and Tanzania. They prefer habitats with poorly oxygenated water because the fishes tend to surface for air frequently. This increases the shoebill’s chances of capturing its prey, especially since lungfish are one of their favorite meals.

2. They can live a long time

The average lifespan of a shoebill stork ranges from 35 to 50 years, which is a long time, especially for birds. Shoebills can stay alive to see seven generations easily.

3. They have long, shoe-shaped beaks

The shoebill stork gets their name from their shoe-shaped beak that can reach up to 7.4 or 9.4 inches long and 4 inches wide. Their large beaks curve down at the end, forming a hook, and they use this sharp curve to pierce through their prey’s bodies. The shape and size of their beaks give them an almost dinosaur-like appearance.

4. They have large, slow-flapping wings

The shoebill stork’s wings can expand up to 7.64 feet, while the bird’s average height is around 3.3. to 4.6 feet. However, when they fly, they have one of the slowest flaps of any bird, going at a pace of 150 flaps per minute.

These birds use their wings to intimidate predators, fly, and help keep their balance since they can lose balance easily when standing. They will fly with their neck and head folded backward to help them maintain longer flights with increased aerodynamics.

5. They poop on themselves

Shoebills practice the habit of pooping on their legs to help lower their body temperature – known as urohydrosis. Their poop has a lot of liquids and once the liquid evaporates from their legs, it helps cool them down.

This habit has initially made scientists believe they were within the true stork family since all true storks use their own poop to cool off. However, shoebill storks are actually closer related to pelicans.

6. They are ferocious predators

Living in marshes and swamps can be difficult, with limited food supplies and plenty of predators. However, the shoebill stork is aggressive and known to attack and fight Nile crocodiles, especially if they are disturbed.

These birds are ambush predators that mostly hunt at night. They will thrust out their beaks at great speed to surprise, decapitate, and capture their prey. Their reinforced beak and skull are like shock absorbers during the thrusts. Their diet typically consists of lizards, snakes, fish, frogs, rodents, snails, and baby crocodiles.

7. Even the young attack each other

Their aggressive and territorial behavior is evident even from a young age. Young shoebills born in the same nest will fight each other to compete for their mother’s attention.

This fighting starts at the age of 2 months and the winning bird usually forces the other to flee and live on their own. However, sometimes they even kill their siblings.

8. They are patient and silent

Another reason shoebill storks are excellent predators is that they are extremely patient. They will stand or sit in their hiding places for hours, waiting for prey – making sure to keep perfectly still to blend in with the darkness.

To successfully ambush prey, they also have to remain silent while waiting for the right moment of attack. And shoebill storks are great at this!

9. They can be very loud when they want

Although they can be silent predators, they are vocal and loud when it comes to mating rituals. Shoebill storks release loud shrieks, sounding like a machine gun, to attract a mate. Potential mates love the loud, popping noises and will seek out each other with these sounds. They are also monogamous birds, mating with only one bird during their lifetime.

10. They are solitary animals

These birds are solitary animals, preferring to live and hunt alone. They tend to have foraging territories at distances 66 feet or more from each other. You will rarely see shoebills together unless it is the breeding season. Even after the mating season, the two birds will move to live separately.

It’s not an odd occurrence where you see shoebill storks living alongside hippopotamuses. The habits of hippos actually prove quite beneficial for shoebills. Hippos will charge through the swamps, clearing a pathway so shoebills can easily navigate the watery channels and hunt for fish. Additionally, hippos often disturb the fishes and force the fish to the surface, making them easier for shoebills to catch.

12. People pay big money for them on the black market

Unfortunately, the scarcity of these birds and interesting facts about them have made them popular in the illegal wildlife trade. Shoebills rarely breed when in captivity and private collectors in Saudi Arabia and Dubai are known to pay over $10,000 for a live shoebill.

13. Their population is vulnerable

According to the IUCN Redlist, shoebill storks are a vulnerable species. There are only between 3,300 and 5,300 mature individuals alive and the population is decreasing. On top of poaching, shoebill storks are also experiencing loss of habitat from pollution, livestock ranging, fires, oil and gas exploration, and more. Some people will even hunt them or collect their eggs for food.

Shoebill storks will bow at each other during their mating ritual. This also appears to be the proper way to greet these birds. Shoebills in captivity are known to bow back at you if you take a deep bow and shake your head from side to side when they approach. However, it’s not recommended to try this with wild shoebills storks.