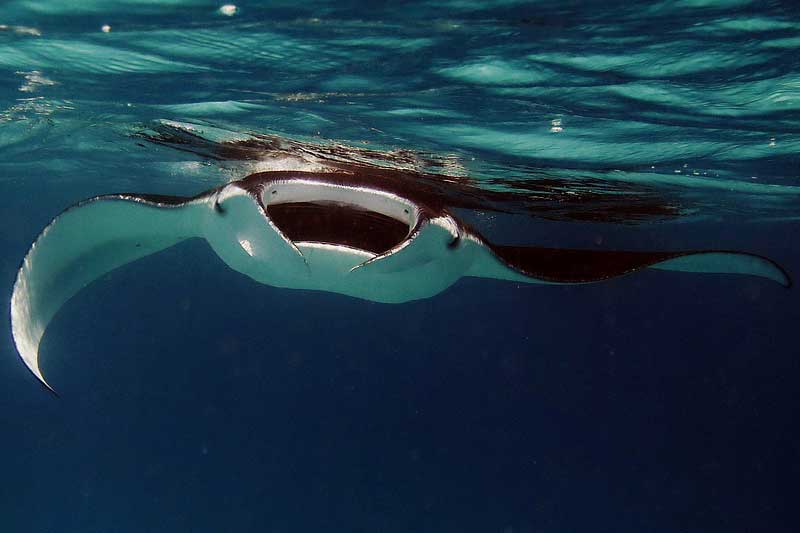 Of marine megafauna, there is no denying that the Manta Ray is one of the most iconic animals in the ocean. While their large size can make them seem scary or intimidating, they are truly gentle giants! But do Manta Rays sting?

In this article, we will be answering the question “do Manta Rays sting” as well as some other common questions about Manta Rays. Read on for some more information on one of the ocean’s coolest creatures!

No, all Manta Rays do not sting. Don’t let their monstrous size fool you, they are totally harmless!

Again, Manta Rays are not dangerous at all. They definitely are gentle giants. In scuba diving hotspots, some Manta Rays tend to get quite friendly with humans and can be very curious, but never dangerous.

However, there have been accounts of boaters being hit by flying Mobula Rays jumping out of the water. In these instances, the Ray is absolutely not trying to cause harm but sometimes an unlucky passerby may be caught in the crossfire.

Do Manta Rays have barbs?

No, Manta Rays lack the venomous barb that are found at the base of the tail of their Sting Ray relatives.

Do Manta Rays have teeth?

Technically, yes but they are very small and not very teeth-like at all. Manta Ray teeth are essentially specialized scales and are not actually used for feeding. Manta Rays will use their teeth during mating to gently grab onto a female during courtship. 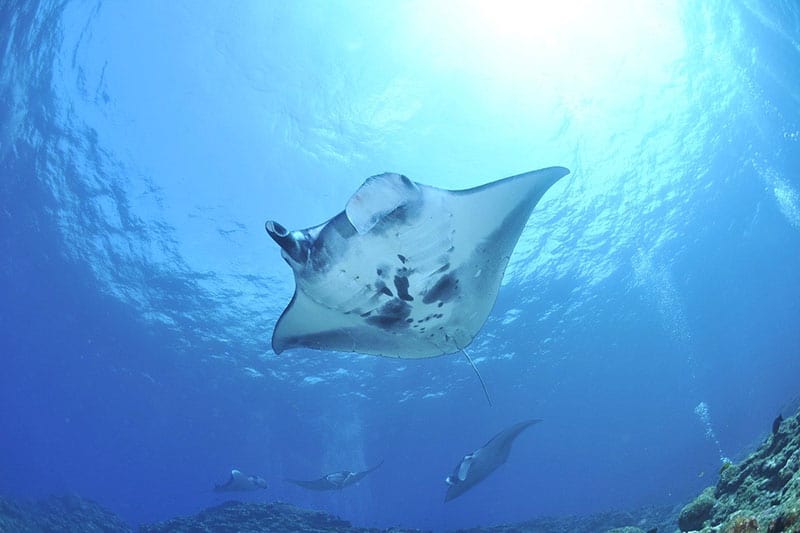 What do manta rays eat?

Even though Manta Rays are huge, their food is very small! Manta Rays are filter feeders and feed on plankton. They use their vacuum like mouths to suck up krill, fish eggs, crab eggs, copepods and other larvae.

How do manta rays eat?

Manta Rays are filter feeders that swim with their mouths wide open to scoop up as much plankton as possible. The strange lobes or “horns” at the front of a manta ray are called cephalic lobes.

The cephalic lobes are crucial for feeding! Manta Rays use their cephalic lobes to help direct or funnel plankton into their mouth. This optimized feeding strategy allows for Manta Rays to get as much plankton to sustain themselves.

Manta Rays are listed as “Vulnerable” with decreasing populations. They are not classified as endangered yet, however if their populations continue to decrease, they could quickly become endangered.

That being said, Manta Rays can be quite mysterious, so scientists don’t have a great idea about how many Manta Rays there are. Worst case scenario, there are far fewer Manta Rays in the wild meaning they could be closer to being endangered than we know.

Technically, yes. Manta Rays are elasmobranchs, which is the subclass that includes sharks, rays and Manta Rays- all of which are fish!

Do Manta Rays have bones?

One thing that makes Manta Rays and other elasmobranchs different from other fish is that their skeletons are made from cartilage.

Cartilage is more malleable than bones and is the material that is found in our ears and noses. Cartilage is lightweight and flexible, making swimming a breeze for these giants.

How big do Manta Rays get?

Manta Rays are the largest species of ray in the world and have been known to have wingspans of over 22 feet across and weigh up to nearly 3,000 pounds! This is not the norm though, on average Manta Rays are typically around 15 feet across.

Different species of rays, like the Cownose Ray are known to make massive migrations where hundreds of rays will swim together. Scientists used to think that Manta Rays also made large migrations, however it turns out that Manta Rays tend to stay put.

That’s not to say that they aren’t capable of making large migrations as scientists believe that they may occasionally travel hundreds of miles.

While some elasmobranchs are oviparous or “egg-baring” where they have eggs cases sometimes called “mermaids’ purses”, Manta Rays produce live young. However, they are ovoviviparous which essentially means that eggs hatch while inside the mother and then she will give live birth.

Where do Manta Rays live?

Manta Rays live all over the world in tropical, subtropical and temperate seas. They tend to prefer deeper water a fair distance away from coastlines, however they may come closer to the coast depending on the time of year.

Do Manta Rays jump out of the water?

Technically no, but Mobula Rays are closely related to Manta Rays and share many similarities and have been known to jump straight out of the water.

Mobula Rays are known to jump out of the water to heights of nearly six and a half feet out of the air!

Do Manta Rays have predators?

You would think that with how big Manta Rays get that they wouldn’t have much to worry about in terms of predators. But actually, Manta Rays aren’t totally safe out there! Manta Rays are preyed on by sharks like the Tiger Shark, Killer Whales and even humans.

Rays include more “dangerous” species like species of sting ray and even electric rays, but they also include the harmless Manta Ray. Some people don’t realize that not all Rays have barbs or stingers.

Manta Rays are truly fascinating animals, even without the venomous barb. Their sheer size alone is enough to wow anybody. Not only that but they glide through the water seamlessly, almost putting their admirers in a trance. It’s no wonder that swimming with Manta Rays is one of the items on many scuba divers’ bucket lists!