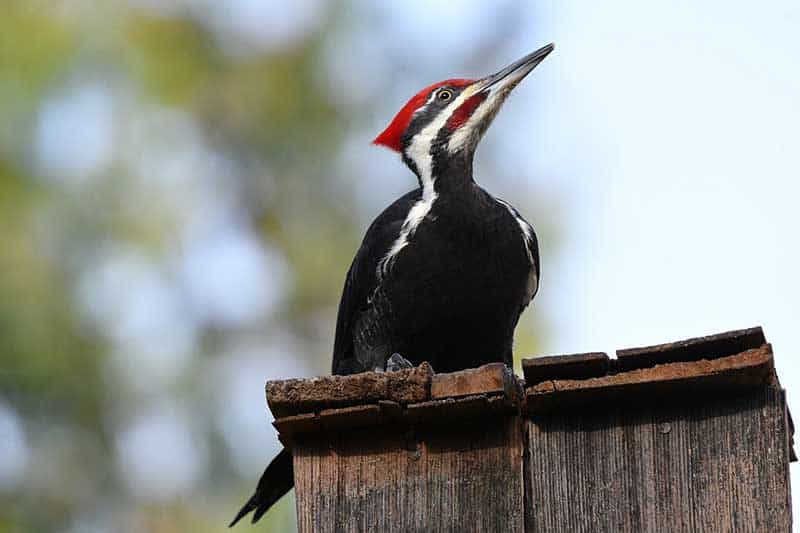 Montana has a huge population of wildlife and birds as the home to 9 national parks, as well as the Rocky Mountains. Thanks to it’s unique geography full of coniferous and mixed forests and high elevations, a diverse selection of woodpeckers, including sapsuckers and flickers, are found here. Keep reading to learn all about the 10 species of woodpeckers in Montana.

10 species of woodpeckers in Montana

The Red-headed Woodpecker is especially beloved in Montana, though they aren’t often spotted. Look for them in the eastern half of Montana in the breeding season, they aren’t common in other areas of the state.

The adults have striking red heads that they develop after adolescence. Before this plumage comes in, the immature juveniles have brown heads and are much more dull and camouflaged.

This woodpecker has a slightly different method for catching food. While it does still drill for insects, it also has the ability to catch insects mid-flight and will store food in cracks and crevices. They’ve even been known to wedge live grasshoppers into these sections, keeping them stored away for a later meal and occasionally covering them with bark or leaves. They’re boldly patterned, easily identifiable, and very active.

Open pine plantations, tree rows in agricultural areas, and standing timber in beaver swamps and other wetlands all attract Red-headed Woodpeckers. They’re fiercely defensive of this territory once they move in, even removing the eggs of other species from nests and going so far as to puncture duck eggs. Because of this action, the Red-headed Woodpecker was used as the Cherokee Indian war symbol for centuries.

The Downy Woodpecker is the smallest woodpecker in North America and a widespread species of woodpecker found year-round across most of the United States and Canada. It’s also found year-round in Montana in a wide range of habitats including open woodlands, forests, orchards, groves, and suburban areas.

In fact, it’s a regular visitor to backyard gardens, feeders, and even residential parks. It’s small size allows it to forage in places where larger woodpeckers can’t reach, such as tall weed stems and grasses.

Downy Woodpeckers have predominately black and white colorations very similar to Hairy Woodpeckers. They have white undersides and black uppers with white checkering and a bold white stripe that runs down the back. Males also sport a tiny red patch on the tops of their heads.

Their silhouettes resemble that of a larger woodpecker, with straight backs as they perch on tree trunks and straight, drill-like bills. However, the bills of Downy Woodpeckers tend to be smaller in proportion than other species.

Hairy Woodpeckers look nearly identical to Downy Woodpeckers in plumage coloration. They have mostly black and white plumage with the same white stripe running along their backs. However, Hairy Woodpeckers are larger and possess a longer bill.

Compared to other smaller sized woodpeckers, Hairy Woodpeckers do a lot of drilling and excavating in order to feed on wood-boring insects and larvae. Listen for their drumming and look for them perched on tree trunks and on the main limbs of trees.

Like the Downy Woodpecker, Hairy Woodpeckers are found year-round in Montana. Since they are larger than Downy Woodpeckers, they rely on larger and taller trees and are generally found in more mature forests and open woodlands.

They are less likely to be found in suburbs and backyards, though they will occasionally take advantage of a feeder, especially those stocked with suet.

Out of all the woodpeckers found in Montana, Northern Flickers really stand out as far as coloration. Unlike most species that feature primarily black and white plumages, Northern Flickers are instead brown all over, with lots of patterning on their undersides and wings.

They’re large woodpeckers in between the size of an American Robin and Crow, with smooth, rounded heads and long, tapered tails. There are two distinct types of Northern Flickers; Northern Flickers in the east have bright yellow patches under their wings, but birds in the west, including Oregon, have red.

Northern Flickers are year-round woodpeckers throughout Montana where they occupy forests and woodlands that also offer open grounds for foraging.

While most woodpeckers hang out on trees to forage, Northern Flickers are often spotted directly on the ground, using their slightly down-curved bills to dig for ants. 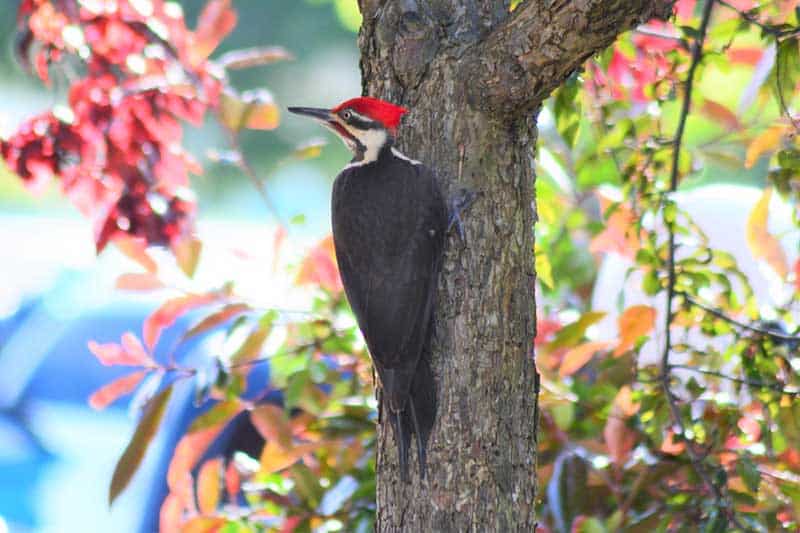 They favor large, mature forests that have plenty of rotted and dead wood for foraging. Carpenter ants are the main prey of Pileated Woodpeckers, but they’ll also eat other wood-boring insects in addition to fruits and nuts. Look for their distinct, deep, rectangular holes left in trees and wood to tell if one’s in the area.

These holes also provide a home to other nesting animals, such as bats, owls, and birds.

These woodpeckers are primarily found in the western third of Montana. They aren’t very common as other woodpeckers, and their small size and inconspicuous nature don’t make them very easy to find.

American Three-toed Woodpeckers often spend a long time perched on a single tree, either sitting very still or flaking off the bark. Unlike most woodpeckers, these woodpecker don’t rely on drilling or excavating wood and instead peel the bark off with their bills.

American Three-toed Woodpeckers are about the size of an American Robin, in between the size of a Downy and Hairy Woodpecker. Their bills are fairly short, but are strong and sturdy to help them pick off bark. They’re mostly black and white, with fine black barring on their white undersides. Males have a dull yellow patch on their foreheads.

You may also like:  Rattlesnakes in Colorado (3 Species With Pictures)

Black-backed Woodpeckers are usually the dominate species in places where both species of woodpeckers occur, they often drive away American Three-toed Woodpeckers from their territories.

These woodpeckers are medium-sized birds, around the same size as a Hairy Woodpecker. Their coloration is close to the American Three-toed Woodpecker’s, but with less barring on the back and wings. The solid black plumage on their backs helps them blend into charred trees in forests where wildfires had occurred.

Black-backed Woodpeckers flock to these burned areas to feast on the larvae of wood-boring beetles and other insects, and will occupy these territories for years.

There are some breeding populations of Williamson’s Sapsuckers in West Montana, but they aren’t common in the rest of the state.

They occupy mountainous forests of pine and aspen. Like other sapsuckers, Williamson’s Sapsuckers drill sap wells into trees in order to tap into the sap supply inside. This is much like tapping trees for maple syrup.

They also eat insects, fruits, and plant material such as cambium. They’re mostly quiet birds, but during the spring their drumming and high-pitched, nasal calls are heard more frequently.

Williamson’s Sapsuckers have extreme differences in appearance between males and females, so much so that they were once thought to be different species. Males are mostly black with a yellow belly, white patches on the wings, and bright red throat. However, females have a pale brown head, with black and white banding on their bodies.

Lewis’s Woodpeckers aren’t very common in Montana, though they can be found in the breeding season in Southern and Western Montana if you know where to look. They tend to stay in pine forests and forests that have been burned. 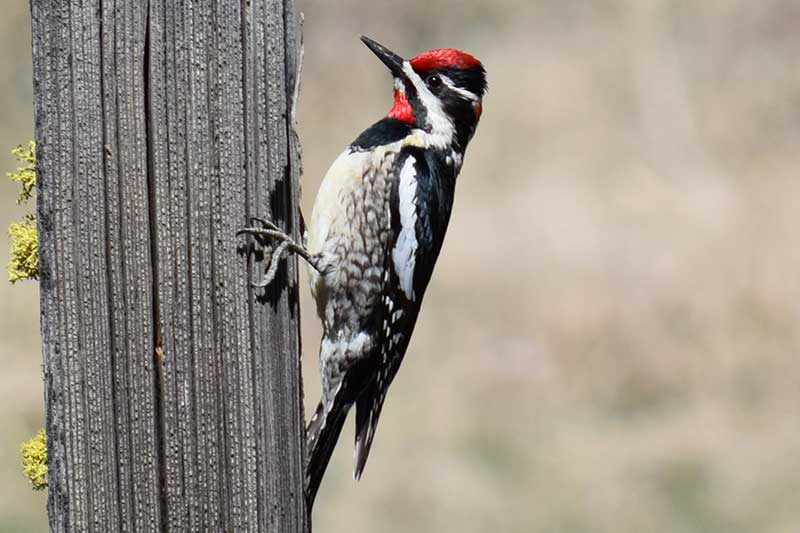 You may also like:  9 Owls in New Hampshire (With Pictures)

Their small, orderly rows of sap wells is a good indication that they may be around. Their irregular and slow drumming, as well as their sharp calls are other good identifiers to look out for.

Red-naped Sapsuckers are medium sized woodpeckers with short, sharp bills. Adults are mostly black and white, with white stripes on their faces and bright red patches on their heads. Their bellies are pale with black and white mottling and a pale yellow patch. Females have a small white patch on their red throats, while males’ throats are completely red.

How to attract woodpeckers

For many of us, attracting woodpeckers to our feeders or yards is something we love. They are quite as commonly seen as chickadees, titmice, or cardinals and add a bit of excitement. However they are harder to spot and also harder to attract. Here are some tips on how to attract woodpeckers to your yard.