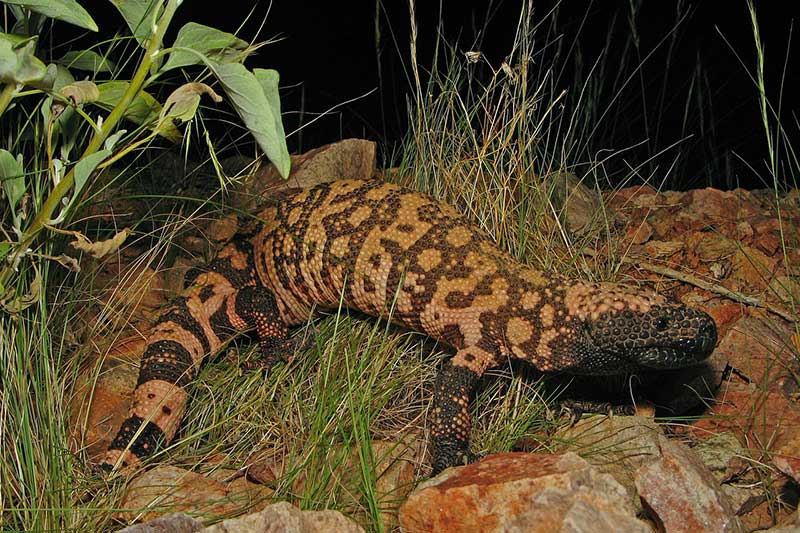 Arizona is full of amazing wildlife that varies immensely depending on the part of the state. Arizona contains several different ecosystems, there are thousands of species to explore when visiting. This article will walk you through some of Arizona’s most well-known, dangerous, and unique wildlife!

Arizona is rich in native wildlife, from large mammals like coyotes and cougars to smaller cactus mice and striped skunks. Some of the species that call Arizona home are found widely across the United States; however, they have many unique species.

The Gila monster (pictured above) is a venomous lizard found in northwestern Mexico up into the Southwestern United States. This lizard reaches around 60 cm long and is not known to be very quick moving; however, don’t let that fool you.

This species is the only venomous lizard in the United States and is found in many parks around the state. They prefer cooler and wetter habitats and are rarely seen in the desert.

The black-footed ferret is native to central North America and is not specific to Arizona; however, it is an endangered species and can be hard to spot. They’re often referred to as the American polecat or prairie dog hunter as they primarily feed on prairie dogs.

The bighorn sheep can be found widely across Arizona and is one of a few hoof stock species in Arizona, including Sonoran pronghorn and the American bison. The horns of bighorn sheep can weigh up to 14 kg, and the sheep itself can reach up to a weight of 143 kg.

Arizona is home to several dangerous animals, as many desert-predominant states are. At the top of the list for dangerous species are:

There are several snakes, spiders, and other insects to be aware of when traveling through Arizona. Always be aware of these species and avoid stepping on them or getting too close. Close contact can be dangerous for both you and the animal.

Arizona has about 43 endangered and threatened species living in the state. These species are all protected under state and federal laws to ensure they aren’t legally being hunted. These laws also prohibit habitat degradation, so all at-risk species have the best chance at survival.

A few endangered species that live in Arizona include:

Invasive species in Arizona play a significant role in the degradation of the landscape and available resources for native species. They often wipe out native populations and overtake landscapes because they have no natural predators.

A few of the most common invasive species in Arizona include:

Some of these species were brought into the environment as pets, such as the bullfrog and red-eared slider. Others were intentionally introduced into the ecosystem as bait, like the crayfish. Regardless of the introduction methodology, all of these species are harmful to the Arizona ecosystems they inhabit.

The Arizona tree frog measures to only be slightly larger than a quarter, at about ¾ of an inch to two inches long. They are most often green with a dark black stripe on each side of their body that runs from their eyes to their back legs. They most commonly live on oak, pine, or fur trees and prefer to be above 5,000 feet in elevation. You’re most likely to spot one of these frogs in central Arizona.

The Cactus wren is a relatively small species measuring between seven and eight inches long when fully grown. They are brown and have white speckling on their chest. A distinguishing feature of the bird is their white lines above each eye. They primarily live in the desert landscapes of Arizona.

The two-tailed swallowtail became the state butterfly for Arizona in 2001 and is considered the largest butterfly in the United States. They can only be found west of the Mississippi River and are relatively easy to spot, thanks to their bright yellow wings.

The ringtail belongs to the Procyonidae family, along with raccoons and coati. The species was named the state mammal in 1986 and are very choosey about the kinds of habitats they live in. They will not live in flat open landscapes, desert landscapes, or high mountains. Therefore, if you’re looking for a ringtail in Arizona, steer clear of the desert.

This small rattlesnake weighs only a few ounces and measures around 24 inches in length. This rattlesnake is considered the last to be named out of all rattlesnake species by herpetologists.

The Apache trout is most commonly found in the rivers that run through Arizona. You can most easily spot them by looking for the pink bands that cross their yellowish bodies.

Depending on where you travel within Arizona, you’re bound to see a wide variety of wildlife. Since many of the insects and snake species found in the state are venomous, you must give them plenty of room when you do come across them. If you spot a species you cannot identify, avoid contact as it may be dangerous.