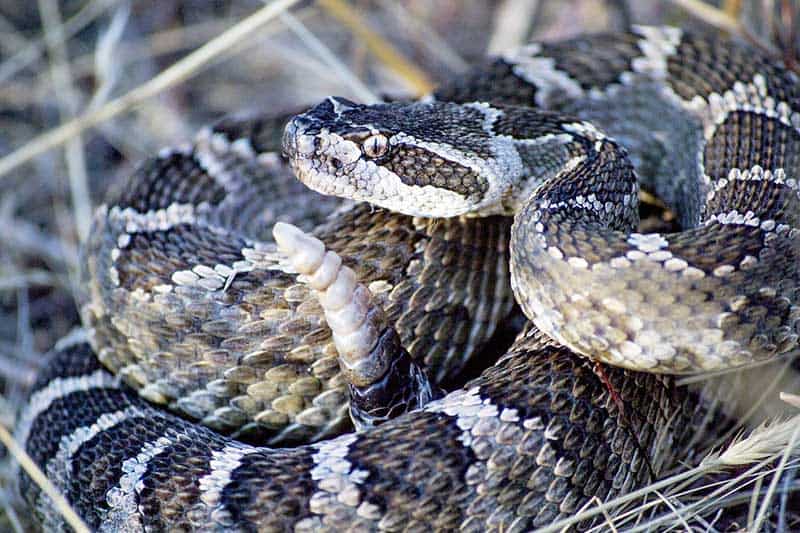 Rattlesnakes are venomous snakes in the viper family, and are only found in the Americas. They get their name from the “rattles” they have on the ends of their tails.

These rattles are actually made up of sections keratin (what our finger nails are made of) spaced apart just right so that when they shake the end of their tails, you get the rattle sound that warns off predators.

14 types of rattlesnakes in Arizona

Now let’s take a closer look at the rattlesnakes of Arizona.

The mohave rattlesnake is a medium to large sized rattlesnake that inhabits much of the semi-desert grasslands and scrublands that exist in Arizona, Southern California, New Mexico, West Texas, and down in Mexico. This snake is widely distributed within its range and is often thought to be more dangerous than other species on this list due to the amount of venom they produce and deliver in a bite.

You can learn more about the mohave rattlesnake here.

Sidewinder rattlesnakes are most common in the Sonoran Desert region of Arizona, southwest and central parts of the state. Though there are some populations in the Mohave Desert to the west and northwest.

Sidewinders are medium-sized snakes with thick bodies that are also known as horned rattlesnakes. Scientists aren’t 100% sure why these snakes have horns above their eyes, but we can be sure that the horns are somehow helping this species survive life in the desert. Compared to other rattlesnakes, the toxicity of the sidewinder’s venom is considered weak or moderate. In fact, according to some sources the sidewinder has the least effective venom of any species of rattlesnake.

This species is only found in the Grand Canyon in central and Northwestern Arizona, how you may find some in portions of extreme southern Utah. They can grow up to 5 feet in length in some rare cases, meaning this snake can get quite large. Grand Canyon rattlesnakes are also referred to as Grand Canyon pink rattlesnakes because of their light coloring.Their habitat includes grasslands, scrublands, great basin desert, and the bottom of the Grand Canyon.

The Arizona black rattlesnake is only found in central Arizona and areas of extreme wester New Mexico. As the name suggests they are almost completely black in color, but do have light rings along the length of their bodies. While they aren’t the biggest rattlesnakes in Arizona, at 4 feet in length they are formidable. It’s also said they they can deliver a lot of powerful venom in one bite, so steer clear!

The tiger rattlesnake is one of the smallest rattlesnakes in Arizona and in the United States. They’re most common in areas of Central Arizona and south into Mexico, some may be found in Southwestern New Mexico. Because they are smaller snakes, tiger rattlesnakes do not deliver as much venom in a bit as something like a western diamondback. However, a tiger rattlesnake’s venom is said to be the third most toxic snake venom in the Western Hemisphere.

The blacktail rattlesnake is common throughout Arizona, east into Texas, and south into Mexico. From the map below you can see they aren’t as common in northeastern parts of the state. Blacktail rattlesnakes typically live in grasslands, deserts, and rocky areas. Their venom is thought to be about 2/3 the strength of western diamondback’s, making it unlikely that a blacktail rattlesnake bite would be fatal.

You may see blacktail rattlesnakes in a few different color patterns, including:

Prairie rattlesnakes are common throughout the plains region of the United States, and are known for having powerful venom.

The Arizona ridge-nosed rattlesnake is a small rattler, reaching only around 2 feet as adults. This species has actually been the Arizona state reptile since 1986, even though they are only found in a small area south of Tucson near the Mexican border.

These small rattlesnakes are found in several western U.S. states, they’re most common in Western Arizona. Speckled rattlesnakes are mostly nocturnal and found on rocky hillsides or canyons. They feed primarily on small birds, reptiles, and mammals. There have been few reports of bites from these snakes, and no deaths. They are venomous put vipers though and you should give it a wide berth if you should come across one.

The western diamondback is the largest of all rattlesnakes in Arizona reaching 6 feet or more in length in some cases. They are fairly widespread and aren’t too picky about their habitat. You’ll often see these large rattlers in deserts, plains, forests, and rocky hillsides. The toxicity level of their venom is actually believed to be lower than other species on this list, however because of their large size they are able to deliver high doses making them quite dangerous.

There are 2 subspecies of the twin spotted rattlesnake, an eastern and western. The western twin-spotted rattlesnake can only be found in Arizona and south into Mexico, the eastern subspecies is only found in southeastern Mexico. Both have a limited range overall, and the western twin-spotted has a very limited range in Arizona, though they are not listed as endangered.

Look for these guys on rocky slopes, brushy hillsides, in coniferous forests, and other areas where there is plenty of prey. This viper is more active during the day while it’s looking for lizards and small mammals to eat. Their venom is highly toxic, but they are only able to deliver small amounts of it because of their size.

How common are rattlesnakes in Arizona?

As we learned, there are as many as 14 confirmed species of rattlesnakes in the state of Arizona. With most of the state providing a perfect habitat for rattlesnakes, they’re more common in Arizona than any other state.

Where do rattlesnakes live in Arizona?

When are rattlesnakes most active in Arizona?

If you read about some of the species in this list, then you may have noticed that some are nocturnal and some are diurnal. With that in mind, I’ll say this about most species.

You may also like:  Do Snakes Have Emotions? Well, Sort of

Rattlesnakes emerge from hibernation between March and April and are generally most active during the daytime, when it’s between 80 and 90 degrees.

Is it legal to kill a rattlesnake in Arizona?

With a valid hunting license it is legal to hunt rattlesnakes in the state of Arizona. Though some species, like the Arizona ridge-nosed rattlesnakes, are protected by state law. So please check with the local fish and wildlife service before you kill any wildlife.