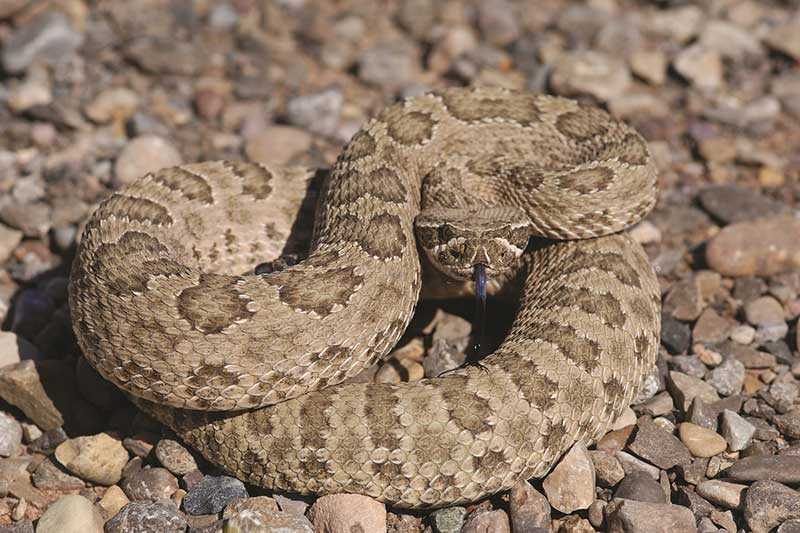 Rattlesnakes are venomous snakes in the viper family, and are only found in the Americas. They typically enjoy arid climates, scrublands, grasslands, rocky terrain, and anywhere that they can hunt for food. Rattlesnakes seem to be most common in the great plains region of the country in the United States. Though there are several species of rattlesnakes to the east as well.

They get their name from the “rattles” they have on the ends of their tails. These rattles are actually made up of sections keratin (what our finger nails are made of) spaced apart just right so that when they shake the end of their tails, you get the rattle sound that warns off predators.

3 types of rattlesnakes in Colorado

Now let’s take a closer look at the rattlesnakes of Colorado.

There are 3 subspecies of the massasauga rattlesnake: the eastern, western, and desert massasauga. Massasauga rattlesnakes are only found in Southeastern Colorado and it’s believed that primarily the western subspecies is found in Colorado. These small rattlesnakes are usually light gray with brown blotches. They have powerful venom for their size and are typically seen in grasslands, open woodlands, and on rocky hillsides.

Prairie rattlesnakes are medium-sized snakes that are sometimes referred to as western rattlesnakes or great plains rattlesnakes. They are common throughout the plains region of the United States, and are known for having powerful venom.

Often referred to as simply western rattlesnakes, prairie rattlesnakes are one of the most common rattlesnakes in Colorado. They can be found in the prairies of the western United States. They like habitats like grasslands, scrublands, and woodlands. Prairie rattlesnakes prey mainly on small mammals, but they can also be the prey of large raptors like eagles and hawks.

This small snake is sometimes referred to as the faded rattlesnake or the yellow rattlesnake. They’re only found in a few states in the midwest including Colorado, Utah, and Wyoming. The midget-faded rattlesnake, despite its size, has some of the most potent venom of any of the rattlesnakes in North America.

How common are rattlesnakes in Colorado?

There are only 3 species of rattlesnakes in the state of Colorado. The 2 small rattlers, the massasauga and the faded rattlesnakes, are not very common in the state. The prairie rattlesnake is fairly widespread in Colorado and encounters are not uncommon.

Where do rattlesnakes live in Colorado?

Rattlesnakes can be seen in Colorado in places like:

When are rattlesnakes most active in Colorado?

Is it legal to kill a rattlesnake in Colorado?

With a valid hunting license it is legal to hunt rattlesnakes in the state of Colorado. You can also kill a rattlesnake if the snake is posing a threat to you or your property. All other snakes are classified as non-game. It’s still a good idea to check with Colorado Parks and Wildlife before you kill any rattlesnakes.

Jesse loves the outdoors and wildlife of all kinds. When he's not learning about wild animals or feeding wild birds, he's running this site and writing about what he's learned.