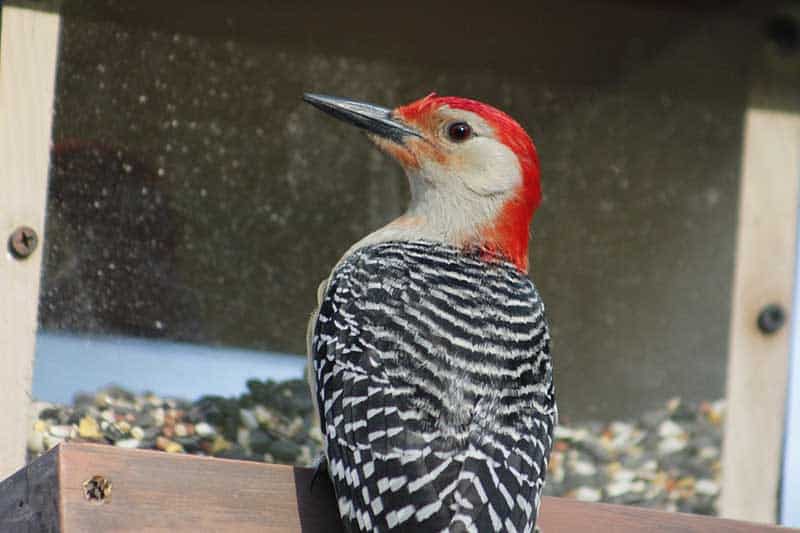 In this article we’re going to talk about all 9 of these species of these Colorado woodpeckers. For each species we’ll have a picture to help you identify it, a bit about its size, a brief description with some fun facts, as well as tell you where and when they can be found in the state of Colorado.

The 9 woodpeckers in Colorado

Downy Woodpeckers are the smallest of all woodpeckers in Colorado (and North America) and they can be found throughout the state all year. They are very common at feeders and easily attracted with suet, peanuts, mixed seed, or black sunflower seed. Whenever I put up a new feeder in my yard, Downys are always among the first to visit it along with chickadees and titmice. They do not migrate and are also very common in the winter time.

The Hairy Woodpecker is also a year-round resident to Colorado and the majority of the United States. They are very commonly seen at bird feeders and eat all of the same things as their little brother the Downy. It’s quite possible you’ve seen them both and just assumed they were the same species.

Red-bellied Woodpeckers are only found in the northeastern corner of Colorado, so they are quite rare in the state. They are significantly larger than Downy Woodpeckers and very similar in size to Hairy Woodpeckers. They can also be seen frequenting bird feeders, especially suet feeders.

You may also like:  Why is a Woodpecker Pecking on My House?

At first glance you notice their red heads but resist the temptation to call the Red-headed Woodpeckers, once you scroll down to the next woodpecker in Colorado you’ll see the difference. Red-bellied Woodpeckers do have a red stomach but it is more of a pale red but is often unnoticeable when they are up against a tree or feeder. Instead look for their black and white barred wings and red mohawk down their neck to identify them.

Red-headed Woodpeckers are less common at bird feeders than the first 3 on this list of woodpeckers in Colorado. They have a breeding-only range in the Eastern Colorado only. They can sometimes be seen visiting bird feeders and then darting to a tree where they will stash the tasty treats in holes or bark for another day.

Red-headed Woodpeckers feed mostly on insects like beetles, seeds, and berries. They are also considered to be among the most skilled flycatchers when it comes to woodpeckers and will commonly store live insects that they catch in tree bark for later. You can recognize them by their bright red heads with black and white bodies, they are quite unmistakable. Their population has been on the decline for sometime and they are becoming more and more rare to see in some places.

These small woodpeckers are found in parts of Southeastern Colorado year-round. Once known as the “cactus woodpecker”, Ladder-backed Woodpeckers primarily live in deserts, scrublands, and and thorn-forests where they find plenty of insect larvae and insects.

Your best chance to spot one of these woodpeckers is between January and March when they are pairing up for the breeding season, look in the early morning when they are most active. Ladder-backed Woodpeckers are non-migratory and found within their range all year. According to allaboutbirds.org, they are commonly found clusters of cholla, Joshua trees, juniper, willow, or honey mesquite.

Northern Flickers are colorful birds found throughout Colorado all year that frequent backyards. While they do occasionally visit feeders, they mostly eat ants from the ground by picking through leaves and dirt and snatching them with their long tongues. Aside from the ants they will eat other invertebrates as well as berries, sunflower seeds, and thistle.

Aside from a few other states in the Northwest, Colorado is actually one of the few states that the American Three-toed Woodpecker calls home. They are mainly found in central parts of Colorado, especially in the forests of the Rocky Mountains. They prefer damaged, old growth forests with lots of dead or even burned trees where they can extract insect larvae and mine for bugs easily.

You may also like:  Woodpeckers in Oregon (Here Are 13 Species)

The majority of woodpeckers have 4 toes, or Zygodactyl toes. However as the name suggests, these woodpeckers have just 3 toes. It is believed that the Three-toed Woodpecker is able to lean back further and strike a more powerful blow to its target because of the leverage having just 3 toes affords it.

Overall these woodpeckers are not common in the U.S. and are not often seen at feeders, if at all.

Williamson’s Sapsuckers are only found in a handful of midwestern states, Colorado being one of them. They have a breeding-only range in the state, so look for them in the warmer months when they are pairing up to mate. They feed primarily on the sap of coniferous trees, extracting it by drilling sapwells. Sapsuckers also feed on a variety of insects.

Uncommon in backyards, Williamson’s Sapsuckers are primarily found in the forests of the Rocky Mountains and westward from there. They roost in natural or excavated cavities and prefer nesting in a larger, older trees.

The other species of sapsucker found in Colorado is the Red-naped Sapsucker. They are found in central and western parts of Colorado during breeding season, and spend their winters in Southern California, Arizona, New Mexico, Texas, and Mexico. Like other sapsuckers, Williamson’s Sapsuckers do not visit bird feeders but may be seen in certain backyards if you know where to look.

How to attract woodpeckers to your yard in Colorado

You may also like:  11 Awesome Birds That Live In Swamps (Pictures)