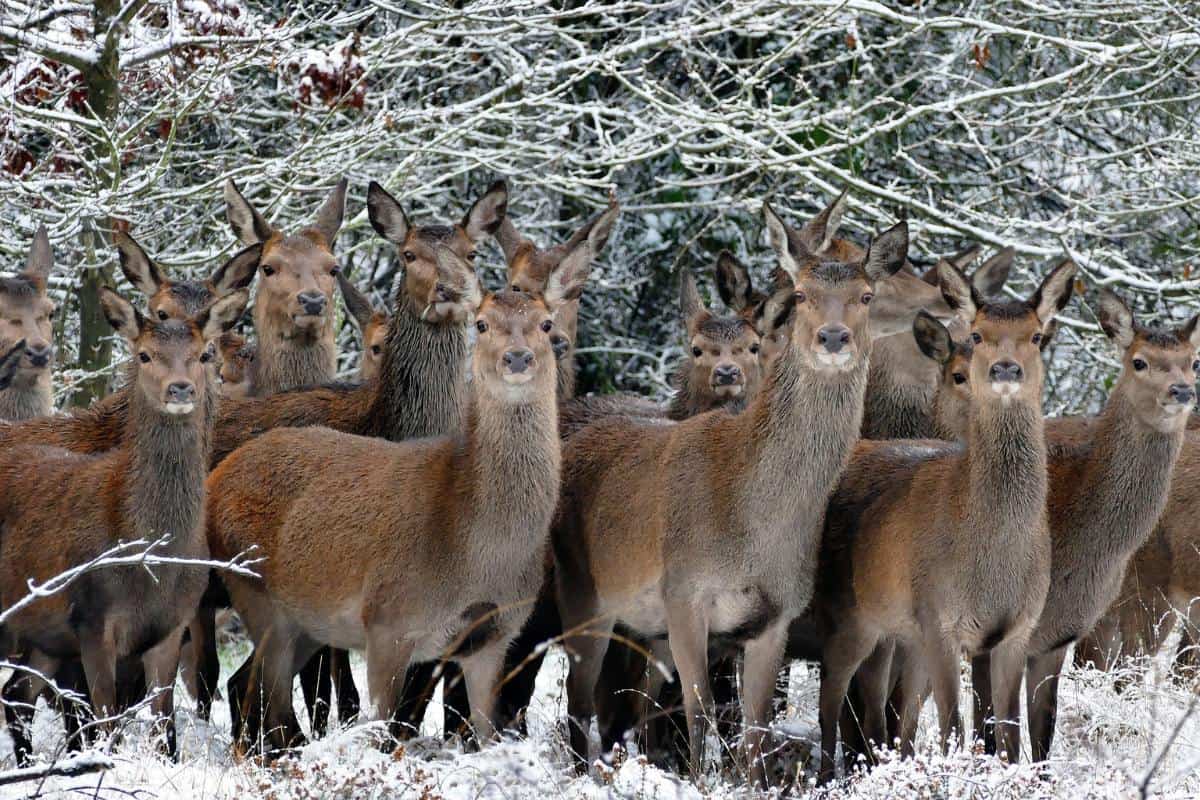 HAnimals can have amazing adaptations. They can live in the coldest of climates and the hottest of deserts. They can fly, swim, and run at incredibly fast speeds.

And they can do all of these things because they have adapted to their environments in a variety of ways. This article explores 16 physical and behavioral adaptations of animals.

What Is An Animal Adaptation?

An animal adaptation is a physical or behavioral trait that helps an animal to survive in its natural environment. Animals can either be born with adaptations or they are learned during their lifetime.

Physical adaptations can be visible and noticeable, or they might be internal and part of the animals anatomy. Keep reading to learn more.

One of the most noticeable adaptations on many animals are their ears. Ear shape is an adaptation to help animals hear better in their environment. Interestingly, ears can also play an important role in regulating body temperature.

Animals that might typically be prey for predators will often have large ears to hear a predator sneaking up on them. A predator’s ears are evolved to hear prey. For example, wolves have incredible hearing and the shape of their ears allows them to hear wounded or slow prey.

African elephant ears have evolved to disperse heat and keep the animal from overheating in the hot savanna climate. This adaptation distinguishes them from Asian elephants.

Examples of animals with ear adaptations:

Did you know that animals’ eyes are an adaptation to their environment? Many animals’ eyesight has evolved to their specific behaviors and habitat.

For example, we’ve all heard the term “eagle eyes” for someone with good eyesight. That term comes from the fact that eagles have excellent vision. Their eyes have adapted to seeing small prey from high in the air.

Nocturnal animals have adapted to have night vision. Owls, for instance, have the precise vision like an eagle, and they also have the ability to see in the dark.

Some animals spend their entire lives in darkness and have no need for vision. Their adaptation is no eyes or blindness.

Examples of animals with eye adaptations:

Many animals have structural adaptations like their legs. You’ve probably seen an animal whose legs look way too long for its body. That is an adaptation to their environment.

For example, wading birds like cranes and herons have long legs to wade in water so they can stalk prey. Black-necked stilts are so named because they look like they are walking on stilts.

We all know giraffes have long legs. Their leg adaptation keeps them safe from smaller predators like lions and hyenas. A giraffe’s body is not only out of immediate reach of a predator, but their legs are also used for defense through kicking and stomping.

Examples of animals with leg adaptations:

Having webbed feet is an adaptation that many aquatic animals have developed to help them move through the water more efficiently. The webbing between their toes acts like a paddle to propel them through water.

A prime example of this is in ducks and geese. Some ducks can swim at incredibly fast speeds because of their webbed feet. This helps them escape danger.

Beavers and otters are another example of webbed foot adaptations. Both furry animals spend most of their lives in water, and their webbed feet help them swim and glide through the water easily.

Examples of animals with echolocation adaptations:

Many animals have adaptations that are for defense and protection from predators. For example, deer have antlers to use as weapons against predators like wolves or cougars.

Camouflage is another defense adaptation to help prey hide from predators. Colors and patterns can help an animal blend into its environment. Many snakes and lizards have color patterns that look like their environment.

Defense adaptations can include hard shells, like turtles and tortoises have to protect their bodies. Snails are another example of a defensive adaptation with their shells.

Examples of animals with defense adaptations:

The ability to release toxins or inject venom is an adaptation of many reptiles, amphibians, and sea creatures. While this adaptation is not exclusive to those animal groups, those are what we think of when we think of venom and poison.

Many snakes have adapted with hollow fangs and venom to hunt and kill prey. This is also a defense adaptation to keep the snake from being eaten by a predator.

Rattlesnakes are a prime example. One of the deadliest venomous creatures on earth is the blue-ringed octopus.

Other animals have adapted to secrete toxins from their skin, like the poison dart frog. Their brightly colored bodies are another adaptation to warn predators that they’re toxic.

Examples of animals adapted with venom or poison:

Whether it’s predator or prey, many animals have adaptations to make them run, swim, or fly faster. Predators have speed adaptations to help them catch prey, and of course, the prey also has adaptations to outrun and escape predators.

You may also like:  Why Are Some Animals Albino? (Answered)

For example, cheetahs are made for speed. Their entire body is adapted to use energy and momentum efficiently.

As they run, their back and legs act like springs to propel the animal to speeds of up to 60 miles per hour. Gazelle have similar adaptations to outrun the cheetah.

Blue marlin bodies are adapted to pierce and glide through the water at speeds reaching almost 80 miles per hour. Their smooth sleek design with sharp snout and muscular tail fin are adaptations that allow the fish to swim that fast.

Examples of animals with adaptations for speed:

Behavioral adaptations help animals survive their environments and often occur alongside a physical adaptation. Animals are either born with instinctual behaviors or they learn them.

One of the primary animal adaptations in behavior is finding food. Many species of animals have developed behavioral strategies used to find food.

For example, hyenas and vultures are often not far from lion hunting territory. These scavengers have learned and adapted to lion hunting behaviors.

Some species have adapted to be food hoarders. Caching is a behavioral adaptation in which animals store food either in one spot or in several spread out locations.

Examples of animals with feeding adaptations:

Predators have evolved to be able to capture prey efficiently without wasting too much time and energy. Those behavioral adaptations include stalking, tracking, hiding, or just adapting to prey behaviors.

Mountain lions are an example of an animal with stealth behavior adaptations. They’ve been known to track and stalk prey for miles while going undetected. Bears learn and adapt to the migration patterns of salmon in the Pacific Northwest, and gather in rivers during spawning season.

Orca learn and adapt to seal behavior. They’ve been known to beach themselves to catch prey, adapting to the changing environment.

Behavioral adaptations for defense protect animals from predators and other environmental dangers. There are a lot of animals that have adapted to that behave in ways that deter predators.

For instance, opossums will play dead when threatened. This behavioral adaptation is so realistic, down to their body stiffening, that no predator wants to eat a dead opossum. Hognose snakes put on a dramatic performance of dying to deter predators.

There’s also hiding behaviors. Many animals have adaptations that are environment specific behaviors for hiding from threats. Softshell turtles for example have adapted to bury themselves quickly in mud or sand.

Some species have developed courtship rituals and mating behaviors. These behavioral adaptations insure the survival of the healthiest members.

In elk, bulls spar and fight by locking antlers until one wears out. The victor wins mating rights to a herd of cows. This behavioral adaptation makes sure that only the strongest elk reproduce.

You may also like:  Ecosystem Vs. Habitat – 7 Key Differences

Males in species like the blue-footed booby and Laysan albatross have adapted courtship dances to impress a mate. These courtship adaptations are instinct for the birds.

Examples of animals with courtship behaviors:

There are animals that have adapted ways of communicating with one another. Animals communicate for a variety of reasons, from territorial disputes to bonding with others.

Communication adaptations include behaviors like urinating to mark territory, like a bobcat. Other communications can be through pheromones, like in the case of ants communicating a path to a food source.

Primates have adapted their facial expressions to communicate emotions. Chimpanzees smile to show happiness but also have expressions of anger and aggression.

Migration is when animals move from one place to another for better resources and living conditions. This is a behavioral adaptation so animals survive through the winter and when extreme conditions like drought occur.

Migratory birds have adapted to leave northern habitats and migrate south for the winter so they don’t have to be exposed to the extreme cold. Geese are an example of a bird that migrates.

Salmon migrate back to their natal waters to spawn. This behavioral adaptation ensures the survival of the next generation of salmon. Humpback whales have adapted to migrate to follow food.

Examples of animals that migrate:

Many animals survive winter because they’ve adapted to hibernate through the cold season. Hibernation is a behavioral and physical adaptation where an animal slows its metabolism and activity to conserve energy through the winter.

Bears are the animal we commonly think of when we think hibernation. Chipmunks and other rodents also hibernate through the winter.

Frogs and toads bury themselves in mud to hibernate through winter. Wood frogs have a physical adaptation that allows them to nearly freeze solid in winter.

Examples of animals that hibernate:

Many birds are crepuscular, and most active during the dawn and dusk hours. Mourning doves are an example of crepuscular behavior. Since their habitat is the southern and southwest regions of the US, daytime is very hot, and nighttime leaves them vulnerable to predators.