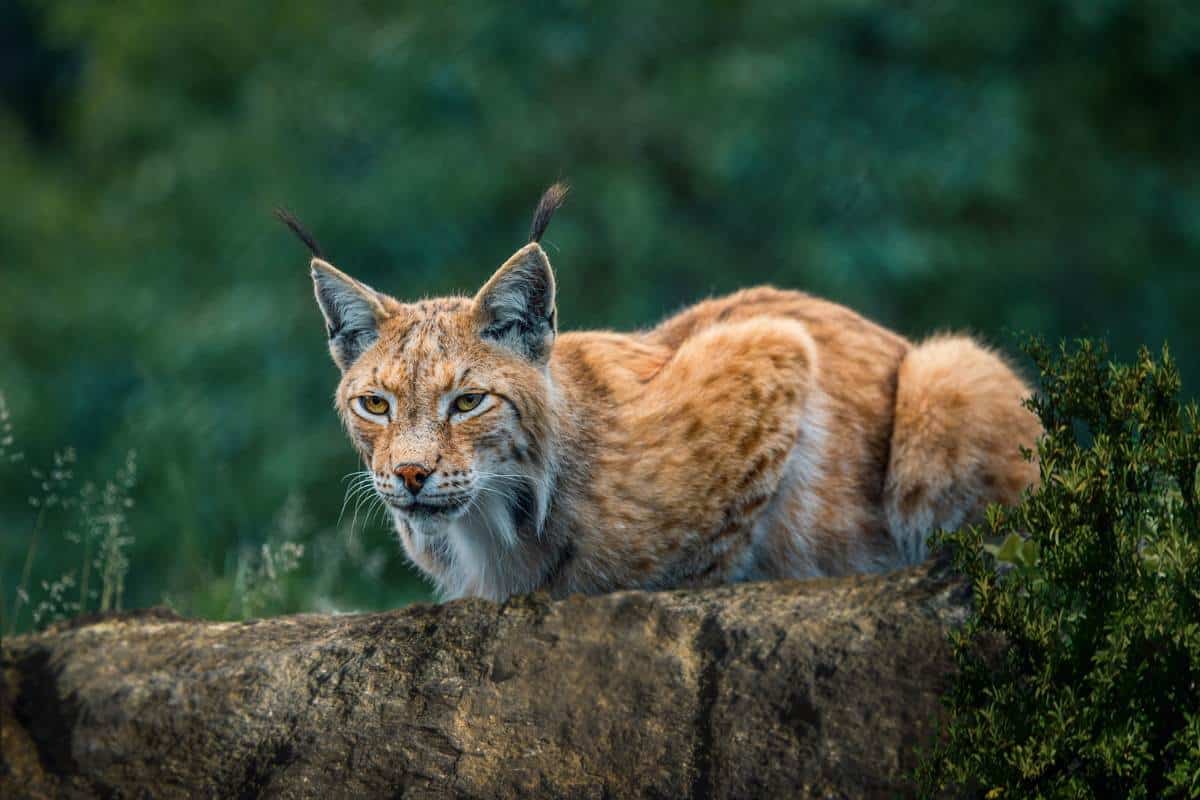 Bobcats are some of the most elusive creatures in North America. They also have the wide ranging territory, from Canada to Mexico, and across the United States. These medium-sized wild cats are shy and solitary, but they are incredibly interesting. Let’s learn more about the fascinating bobcat. This article gives you 23 facts about bobcats, some of which we bet you didn’t know.

Bobcats are medium-sized wild cats with a short bobbed tail and distinctive spotted coats. They are one of North America’s most elusive predators. We have compiled some interesting facts about bobcats.

Bobcats are very territorial, and will defend their home range against other bobcats. They use urine spraying, clawing, and biting to mark their territory. They are solitary cats, so they don’t hunt together like lions in Africa.

Most people think bobcats are nocturnal. Although they may hunt day or night, bobcats are actually considered crepuscular because they’re most active around dawn and dusk.

3. A Bobcat Travels The Same Route In Its Territory Every Night

4. They Are The Most Abundant Wild Cat In North America

Bobcats are the most abundant wild cat in North America. They are found throughout the continental United States, from southern Canada to northern Mexico. The U.S. population alone is estimated to be over 3 million individuals in the wild.

5. Mother Bobcats Give Birth To 1 to 6 Kittens

Females will give birth to 1 to 6 kittens after a gestation period of 63 to 67 days. The kittens are born blind and deaf, and they rely on their mother for everything.

6. Bobcat Kittens Stay With Their Mother For Up To 12 Months

Bobcat kittens usually stay with their mother for up to 12 months before striking out on their own. During this time, the kittens learn important survival skills from their mother.

7. They Get Their Name For Their “Bobbed” Tail

Bobcats get their name for their “bobbed” tail. Their tails are short and the tips are black. All bobcats have a short bobbed tail.

Bobcats are known to be fierce and cunning predators. They’re also incredibly patient, stalking their prey up to 7 miles away before making a move.

9. They Can Reach Speeds Of 30 Miles Per Hour

Bobcats are incredibly fast creatures. They can reach speeds of up to 30 miles per hour when they are running. This makes them one of the fastest animals in North America.

When they are chasing their prey, they can cover a lot of ground very quickly with short bursts of speed. Bobcats are also excellent climbers and can climb trees with ease.

10. Bobcats Are A Subspecies Of  Lynx

Bobcats are a subspecies of lynx, which is a wild cat that ranges across much of Europe, Asia and North America. The bobcat is the most common member of the lynx family.

You may also like:  16 Interesting Facts About Baby Deer (Pictures)

Bobcats can live up to 15 years in the wild and 20 years in captivity. The oldest bobcat in captivity lived to be 32 years old.

Bobcats can weigh anywhere from 12 to 33 pounds. The average weight of an adult bobcat is around 20 pounds. Male bobcats tend to be larger than females.

13. They Can Take Down Much Larger Prey

Bobcats are not your typical house cat. They are actually proficient hunters, capable of taking down much larger prey. In fact, bobcats have been known to take down deer.

14. One Bobcat Can Have Several Dens

A single bobcat can have as many as six different dens! Each of these dens will serve a different purpose. They will have dens throughout their territory so they always have a place to stay when on patrol in their range.

Bobcats can jump really far and really high. They’ve been known to clear over 12 feet in distance in a single bound. They can also jump over 6 feet tall fences.

When food is plentiful, bobcats will store extra in a cache. The cache may be a hidden spot in the ground or up in a tree. When food becomes scarce, the bobcat will return to its cache and eat the stored food.

Unlike your typical house cat, bobcats don’t mind swimming. Although they are not typically associated with water, they are actually good swimmers and can swim long distances.

18. They Are Closely Related To Cheetahs

Similarities between bobcats and cheetahs are evident in their physical appearance. Both animals have a spotted coat. Bobcats typically have brown spots on a tan or gray coat, while cheetahs have black spots on a yellow or orange coat.

Bobcats come in different colors depending on their geographical location. In North America, they can be brown, tan, gray, or black. Cats found in the southern part of the continent tend to be lighter in color than those in the north.

20. They Have A Wide Range Of Vocalizations

From screams and wails to purrs and chirps, bobcats are capable of making a wide variety of sounds. Mothers with their cubs will purr and make a chirping sound to call her babies.

Unlike cheetahs, bobcats have retractable claws. This means that their claws can be extended and retracted at will. It also means that you will not see claw marks in a bobcat paw print.

22. The Bobcat Is The Official State Wildcat For New Hampshire

The most interesting fact about bobcats is that the U.S. President Calvin Coolidge had a pet bobcat named Smoky. The cat was trapped in Tennessee and gifted to the president by the Great Smoky Mountains Association.