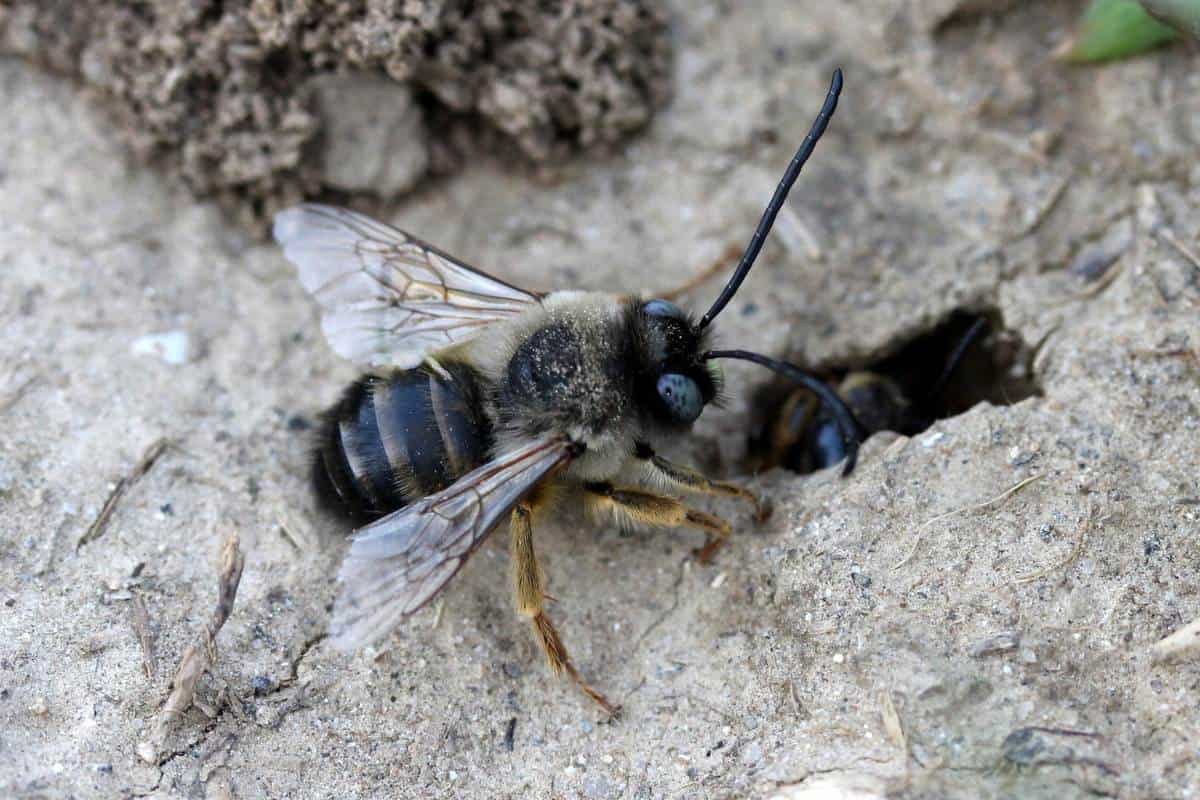 Did you know some species of bees burrow in the ground? That’s right. Not all bees live in hives like honey bees. Some bees are solitary and have specialized adaptations to live in burrows.

Bees of all species play important roles in the environment and for pollination, even if they don’t live in a hive or make honey. Let’s learn more about different kinds of bees that nest in the ground.

There are thousands of species of bees that burrow in the ground. They all have distinct features and behaviors. We have compiled a list of 22 random examples of ground burrowing bees.

Miner bees are a species of solitary bee that burrow underground. They are native to North America and Europe, and prefer to build their nests in sandy or loose soil.

Miner bees get their name because they mine under the ground. Unlike some species, they dig their own burrows.

Bumble bees are one of the most iconic and well-known species of bees. They are easily recognizable by their large, round bodies and their black and yellow stripes.

Bumble bees are social and live in colonies in burrows underground. They create tunnel systems and chambers for eggs and larvae to develop.

As the name suggests, the common ground bee makes its home in the ground. These bees create burrows to live and raise young underground. There are hundreds of species of ground bees.

Mason bees are a type of solitary bee that build their nests in cavities and burrows underground.  While they don’t produce honey, mason bees are important pollinators of crops and wildflowers.

Yellow faced bees are found on all continents except Antarctica. They use existing burrows made by other insects to nest in and don’t really dig their own.

Digger bees get their name from digging and burrowing into the ground to make nests. They are solitary bees. They can also be called ground bees.

The leaf cutter bee is a solitary bee that cuts pieces of leaves to line its burrow. It is an important pollinator of crops and flowers. Leaf cutter bees are native to North America.

Cellophane bees are solitary bees that excavate tunnels to burrow into. Their nests are lined with a polyester-like secretion that gives them their name.

The alkali bee prefers to burrow into salty soils. They are native to desert and arid regions of the western United States. They are solitary bees.

The Orange-legged Furrow Bee is a solitary bee that is native to Europe. It gets its name from the orange hairs on its hind legs. They nest in the ground, excavating tunnels into soft soils.

Dawson’s Burrowing Bee is native to Australia. They can be found burrowing in arid claypans. Even though it’s a solitary bee, several thousand individuals will burrow in one area creating communities of bees.

You may also like:  15 Random Examples of Ectotherms (Pictures)

Sweat bees are small, reddish-brown insects with black stripes on their abdomens. They are mostly solitary but enjoy varying degrees of social contact with other bees.

Long-horned bees get their name from their long, curved antennae that look like horns. Females burrow with young, and will gather pollen to bring back to their nest to feed larvae.

The wool carder bee gets its name from gathering the fuzzy hairs from plants, kind of like gathering wool. They then use it to build their underground nests.

Plasterer bees are very similar to cellophane bees in the way they line their nests with secretions. The Plasterer bee will smooth out the walls of their burrows using their secretions like plaster.

The ivy bee will build a nest by burrowing into soft loose soil near vegetation. They get their name because they’re fond of flowering ivy in the Fall months.

Ivy bees look similar to honey bees but do not hive together. They nest in large social groups with several males and females living together.

Hairy-footed flower bees are the first to emerge in Spring. They are a widespread species, found in Europe, Asia, North Africa, and recently introduced to North America. They’re named for their hairy little feet.

Nomad bees are named because they’re little nomads who steal other insects’ burrows. Sometimes referred to as a “cuckoo bee “ because like the cuckoo bird nomad bees lay eggs in others’ nests to steal resources.

These bees travel from place to place, collecting pollen and spreading it around. This helps the flowers to reproduce and the plants to grow.

Carpenter bees get their name from their ability to bore into wood in order to create nests but they also burrow underground. They have large mandibles that are used to burrow or bore into their nests.

Carpenter bees can be easily mistaken for bumble bees because of their size and appearance, but the bumblebee has more yellow on its body.

The blood bee gets its name from its blood red- colored abdomen. They are known to burrow into other bees’ nests to steal resources.

Blood bees don’t always live underground. Sometimes they find holes in rotting wood that are just above the ground.

Pantaloon bees get their name from their oversized pollen pouches on their legs that look like pantaloons. They are a solitary bee native to Europe and Asia, but they burrow in large groups together.

Resin bees are opportunistic burrowers who look for holes and cavities to crawl into for a nest. They don’t dig or bore holes themselves. They collect resin to seal up their nests which is where they get their name.