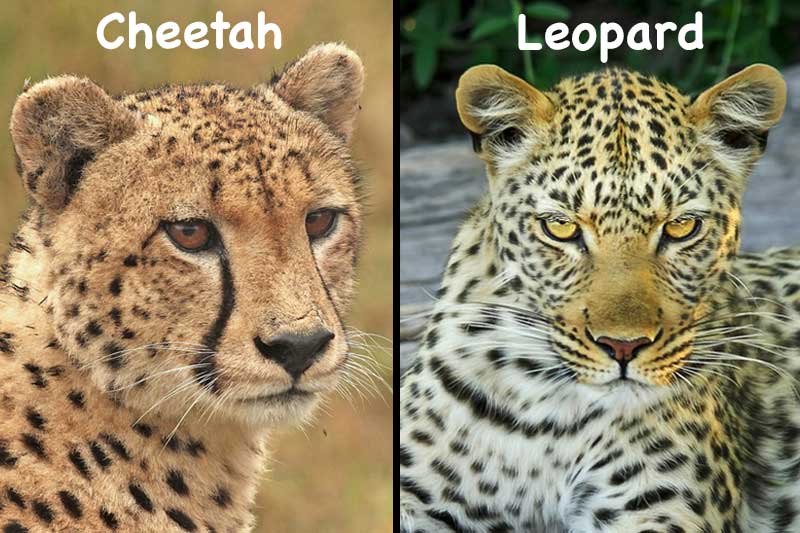 Do you love big cats but have a hard time telling them apart? It’s not uncommon to get confused when it comes to leopards vs cheetahs due to their similarities. However, these large cats have several noteworthy differences that this article will dive into.

After reading the 8 ways cheetahs and leopards differ that we list below, you’ll have no problem differentiating between these two well-known spotted cats.

Leopards and cheetahs live in different regions of the world and prefer different types of landscapes. Leopards are widespread and can be found throughout the continent of Africa, as well as in central Asia, India, Nepal, and China. In contrast, cheetahs only live in eastern and southern Africa.

The only other place you can find a subspecies of the cheetah is in Iran, where the critically endangered Asiatic cheetah barely holds on with its population of only a few hundred individuals.

Cheetahs prefer living in open areas like grasslands, whereas, since leopards are a bit more widespread, you’re likely to find them in a wider variety of landscapes. Since they can adapt much more easily than cheetahs, they can be found in densely vegetated jungles, mountain habitats, savannas, rainforests, or grasslands.

Because of so many differences in habitat, a great way to determine if you see a leopard or cheetah is to base it on location.

Cheetahs have very distinctive markings on their faces that readily distinguish them from other spotted cats. The black tear-like marking is a black line that comes down from the inner edge of each eye to frame the snout.

Cheetahs are the only large cat with this marking on their face, making them easily distinguishable from leopards, who have no lines on their face. Leopards, alternatively, have a longer snout and spots coming inward towards the mouth.

Although both of these cats have spots, they are pretty different when you look at the spots up close! A leopard’s spots are made up of broken-up lines, resembling a rose. It’s not until you get to the stomach region and legs that some of them start to run together to form solid black spots.

Alternatively, cheetahs have solid black spots covering the entire body, and the spots are not broken up or intermixed with any other colors. Because of this, their spots tend to be slightly smaller.

4. They have different color eyes

Cheetahs have brown eyes that blend in well against their fur. Their amber-colored eyes do not vary much between individuals, making it rare to find a cheetah with any other eye variation.

Leopards, on the other hand, have green to blue colored eyes. It’s common to see them with vibrant green eyes, but there can be different variations in the eye color of this cat. Their eyes stand out from their coat and are incredibly striking when compared to the cheetah. This is a major difference between the two species and can be incredibly helpful for telling them apart.

You may also like:  30 Commonly Asked Questions and Facts About House Mice

5. Their body structures are totally different

The head and body shape of these two cats varies immensely. Cheetahs have small rounded heads with tall, lean bodies. They are sleek and incredibly slender! Leopards and stocky and considered the smallest of the large cats. They have a muscular build with bulkier limbs than the cheetah.

The two species have very different features due to their preferred habitats and hunting methods. Leopards have shorter, more muscular legs because they often climb trees and stalk prey. Whereas cheetahs have long, slender legs to help them with speed. This leads us right into the hunting methods of the two cats.

Cheetahs use their incredible speed to chase after their prey. Since they live in a wide-open habitat, they cannot hide and stalk their prey quite as much as other species can. These chases most often occur during the daytime, where the cat can easily see its best path.

Leopards use their tree-climbing ability to wait and pounce on their prey. Since they have much shorter legs and denser bodies, they cannot run as fast to chase down species like deer. Leopards often hunt at night to use their camouflage to their best advantage.

Although they do blend into their natural environment pretty well, they can easily be spotted by prey during the daylight. Therefore, their hunts are more successful if they hide and stalk prey once it’s already dark outside. 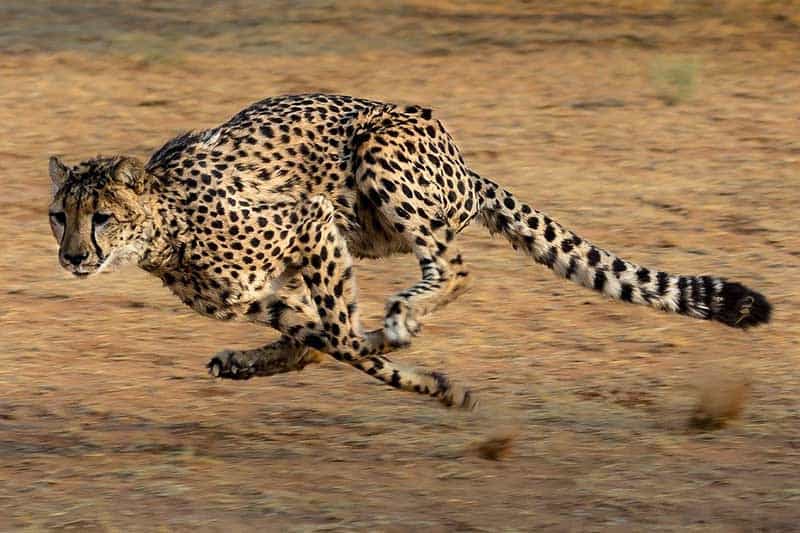 Cheetahs are the fastest land mammal on earth, reaching up to speeds of 103 km/hour, or 64 mph, within 3 seconds. They generally top their speed at 128 km/hour, or 80 mph. This kind of power comes from their long, lean legs that can propel them towards their prey.

The leopard is nowhere near as fast as cheetahs and can only reach speeds up to 60 km/hour, or 37 mph. Since they are much less reliant on their speed, this is not a big problem for the species.

The overall life cycle of these two species differs significantly, starting with their life expectancies. Cheetahs usually live between eight and ten years in the wild. Leopards have more longevity, being able to live upwards of 17 years!

The oldest living leopard in captivity lived to be 24 years old!

However, nature always has a way of balancing things out to ensure healthy populations are maintained. Although cheetahs have shorter lives, they carry a pregnancy for between 90-95 days giving birth to litters of between four and eight cubs at a time.

Leopards are pregnant for slightly longer, between 90 and 105 days, but only give birth to two or three cubs in each litter. Therefore, a female leopard and cheetah could have the same number of cubs in their lifetime even though the female leopard could outlive the cheetah by nearly a decade.