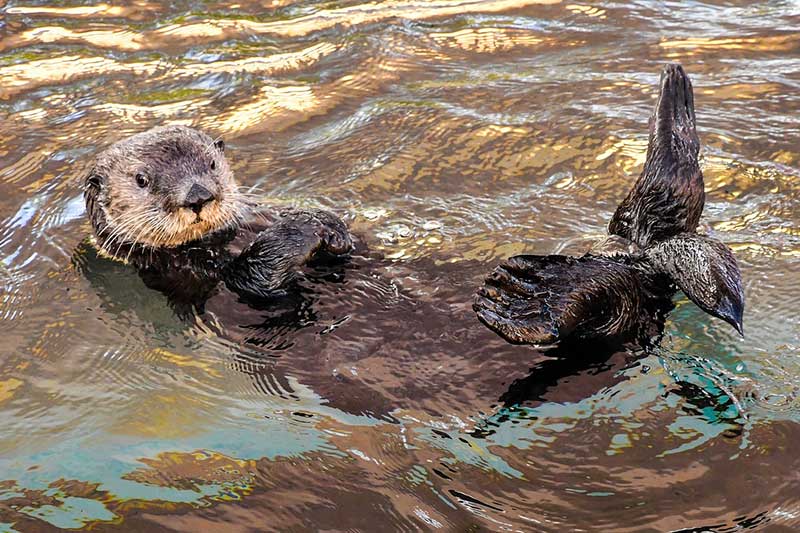 Because of their uniqueness and cuddly appearance, sea otters are among the animals that capture everyone’s attention. They are semi-aquatic creatures that spend the majority of their time floating in the Pacific Ocean.

This keystone species can be found worldwide but are most common in Russia, Japan, and North America. These characteristics of sea otters will give you a better understanding of these adorable creatures.

A characteristic is a way that sea otters, or any animals, are different from other animals. These are frequently physical manifestations, but they can also be behavioral.

1. The fur of a sea otter is the densest of any mammal

Sea otters, unlike other animals, don’t have a thick layer of blubber and rely solely on their fur for warmth. Their fur insulates them from the cold waters and is water-resistant, allowing sea otters to survive the chilly water.

Each square inch of the otter’s body contains 600,000 to 1,000,000 hair follicles, which are densely packed. As a result, sea otters spend 48% of their day grooming and combing their thick fur.

2. Their hind feet and tail are flattened, and both aid in propulsion

The flattened hind feet and tail of the sea otter aid in propulsion as the animal swim through the water. The webbing between its toes allows it to move through the water quickly and easily by using its legs as paddles while holding onto the shellfish it eats with its front paws.

Its flat, paddle-like tail serves as a rudder. They can rotate their tails in any direction, allowing them to move quickly and easily through the water. It also serves as an extra propeller, allowing it to move faster than other animals in the same area.

Although sea otters are the smallest marine mammal, they’re the heaviest member of the weasel family. The largest weasel, the wolverine, only weighs up to 25 kg. However, a sea otter’s weight is between 15 and 45 kilograms (30 to 100 pounds), depending on its age and its body length ranges up to 4 feet.

Sea otters have retractable claws on their front feet as well as a loose flap or pouch of skin beneath each foreleg. The retractile claws are critical for sea otters’ survival in the sea.

When it’s time to swim, the sea otter pulls its claws out of its sheaths and into their normal position, where they can be used as rakes to catch food. Their claws are used for grooming and eating in addition to catching food.

The loose skin pouch under each foreleg is used to store the food gathered by the sea otter.

5. The whiskers of sea otters are used for sensing

Sea otters use their whiskers for hunting and detecting prey underwater. These whiskers are extremely sensitive to vibrations and can detect a wide range of stimuli, such as the movement of a fish just beneath the surface of the water.

They can detect motion in all directions, allowing them to get a sense of what’s happening around them even when they can’t see it clearly due to cloudy weather or poor visibility.

The use of rocks for pounding is another unusual behavior observed in these marine mammals. Pounding is commonly linked to eating small shellfish such as mussels and clams. When pounding with tools, sea otters may utilize various tools depending on the type of shellfish they’re attempting to crack open.

But since rocks are readily available on most beaches, these animals prefer to use them. These animals pound small, hard-bodied prey items with rocks to gain access to the edible fleshy interior.

This behavior has been observed in all sea otter species, including their pups. They even use stationary rocks on the beach as anvils to crack open mussels.

Sea otters are only found in the Pacific Ocean, where they live on coastal areas and islands. The sea otter’s diet consists almost entirely of invertebrates, crustaceans, and shellfish such as sea urchins, crabs, clams, mussels, and snails, and they consume up to 25% of their body weight each day.

This is because they have a high metabolism and require a lot of energy to stay warm in the water. Some of them have been observed feeding on fish, particularly when shellfish and other invertebrates are scarce in their environment.

8. Sea otters can dive up to depths of 90 meters

The sea otter can dive to depths ranging from 18 to 90 meters. This is an incredible accomplishment for such a small animal.

Most mammals would be lucky to reach half that depth, but the sea otter can hold its breath for up to five minutes and swim at speeds of more than five miles per hour. They do this in order to find food on the ocean floor.

9. Sea otters hold hands while they sleep to keep themselves from drifting apart

During mating season, sea otters tend to congregate in large groups. Females and males can be seen living in separate groups, but territorial males can live within the females’ group.

These animals are also known for sleeping in the ocean with their hands gripped together to avoid being swept away and becoming separated from the rest of the group.

10. Females are primarily tasked with raising their young, rather than males

Female sea otters are more responsible for raising their young than males. Females bear primary responsibility for raising the young, feeding them milk from their bellies for up to 8 months.

This milk is high in fat and protein and aids in the development of the pups’ immune systems. She also looks after her pup by keeping it warm, grooming it, and teaching it to swim and hunt.

11. Sea otters use their chest as a dining table

Sea otters spend most of their time floating or hunting in the water. As a result, they have developed the unique ability to use their chest as a dinner table while floating in the ocean.

You may also like:  Elk Vs Moose (11 Main Differences)

This allows them to save energy and spend more time eating while floating rather than having to travel to the nearest land to eat their prey.

12. A sea otter closes its nostrils and covers its ears when it dives

When sea otters dive underwater in search of food, their nostrils, and ears close and cover to prevent water from entering. During this time, they rely solely on their whiskers to detect the movement of the animals around them, as they cannot hear or smell.