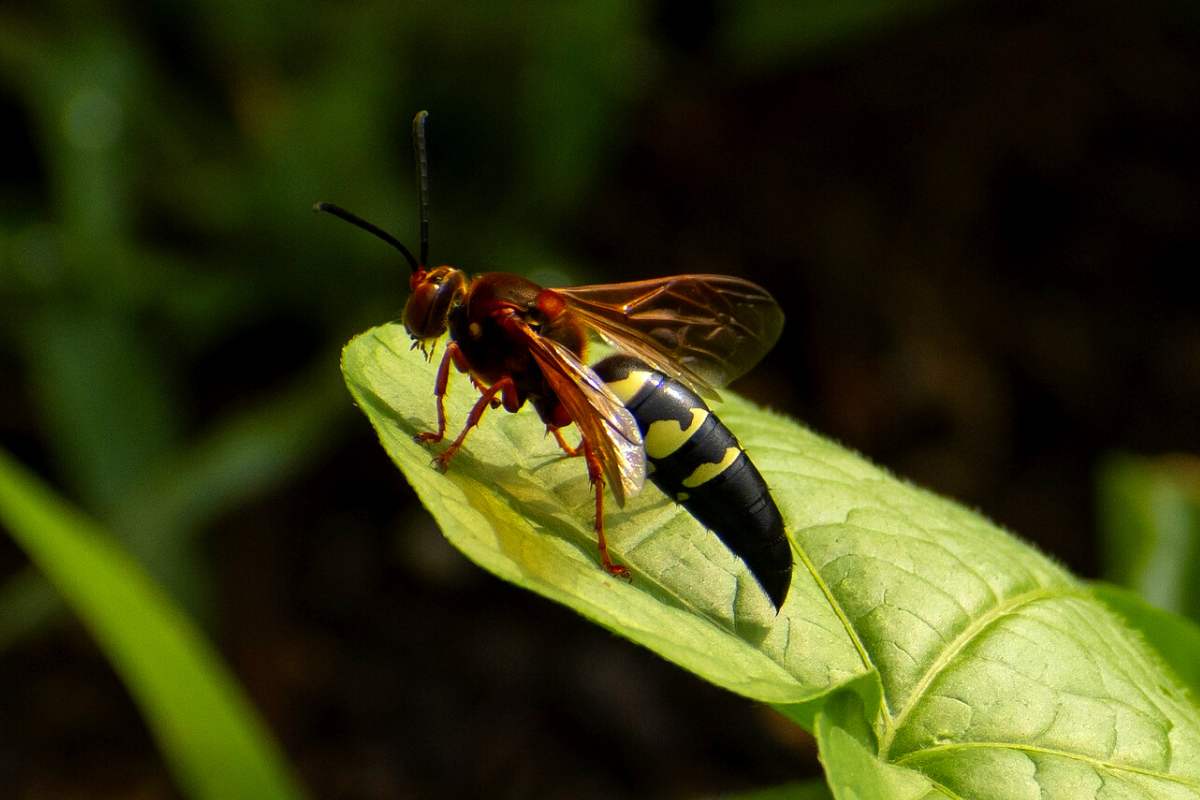 Did you know there are over 30,000 species of wasps? Some of them are ground burrowing wasps that are often solitary insects. These ground burrowing predators target specific prey that they bring back to their burrow for their parasitoid larvae. That means female wasps will sting and paralyze prey, lay their eggs on it, and newly hatched larvae feed on the prey until they develop into adults.

This article gives you 16 different kinds of ground burrowing wasps.

Ground burrowing wasps target specific prey for their parasitoid larvae. These wasps use burrows to store prey that give larvae food and space to develop into adults.

The yellowjacket is one of the most commonly known species of wasps. They are easily recognized by their black and yellow striped bodies.

Yellowjackets are also known to be aggressive, and are often considered a nuisance. They typically move into abandoned rodent burrows underground to build their colony. Thousands of yellowjackets can occupy one nest.

Cicada killer wasps are a type of solitary wasp that burrows underground. They are large wasps that get their name from their prey of choice – cicadas.

These wasps will locate a cicada, paralyze it with their sting, and then drag it back to their burrow. The cicada is then used as food for the wasp’s larvae. They are harmless to humans.

These wasps are known for their ability to burrow into the soil and create their own nests. Digger Wasps are solitary insects, meaning they do not live in colonies like some other species of wasps.

Digger wasps are closely related to mud daubers, except they live underground in burrows and not in mud nests above the ground like daubers.

As their name implies, these wasps hunt crickets. They’re large and metallic black in color. Despite their scary appearance, they’re not aggressive towards humans.

Much like their relative the cicada killer, cricket hunters use a cricket as a host for their larvae by laying eggs on it. The wasp will sting a cricket and pull it into the burrow.

The two-spotted scoliid wasp gets its name from the two spots on the top of its abdomen. They are found all over the United States.

Scoliid wasps feed on scarab beetles. They will burrow underground and use beetles to feed on and lay eggs on. The beetle will feed the wasp larvae that hatch.

Despite the name, Norwegian wasps are found not just in Norway, but all across northern Europe and the United Kingdom. They nest in large social groups.

Norwegian wasps typically nest just above the ground. They have been known to occupy burrows if they find a cavity in the ground.

Spider wasps are solitary insects that prey on spiders. They paralyze their victims with a sting and then drag them back to their burrows, where they lay their eggs on the prey.

These wasps vary in size and coloration, but most are black or dark-colored with orange or yellow markings. They are found all over the world.

You may also like:  29 REAL Examples of Carnivores (With Pictures)

Tarantula hawk wasp does to tarantulas what the spider wasp does to spiders. They are a large wasp, reaching 2 inches in length and they’re dark colored, usually black.

Tarantula hawks are found all over the world. They live in deserts and regions where there are populations of tarantulas.

The smokey-winged beetle bandit is a wasp that is harmless to humans but not to beetles. They are a solitary wasp.

These wasps are helpful in controlling invasive beetles like the emerald ash borer. They’re often found nesting in burrows dug into hard soil near wooded areas with lots of beetles.

Scarab hunter wasps are nonaggressive solitary wasps that hunt scarab beetle larvae. They look similar to a yellowjacket but they’re fatter and not as slim and smooth.

Scarab hunters burrow underground to lay their eggs on scarab larvae. The beetle larvae will host the parasitic wasp larvae until they develop into adults and emerge from their burrows.

Ornate tailed digger wasps are solitary and live in Europe and Asia. They look like a yellowjacket with more black on their head and back.

This wasp loves to hunt mining bees. They also are often found burrowing with other wasps.

Sand wasps don’t really look like a wasp at all. They look more like a fly with stripes because of how their wings fold across their back like a fly. So it may come as no surprise that they prey on houseflies.

The black and white little wasp will excavate sand out of a burrow on its own. They will dig several tunnels and chambers underground for larvae and nesting.

The great black wasp s a solitary wasp that preys on grasshoppers, crickets, and other insects. They sting their prey three times to paralyze it and lay eggs on it.

Great black wasps are generally not aggressive but they will sting a human if they feel threatened. They are large digger wasps and burrow underground.

The Asian giant hornet is the world’s largest hornet. It’s often referred to as the Japanese giant hornet but was nicknamed “murder hornet” because of its intimidating size. It’s now widely agreed that they pose no real threat to humans.

These giant hornets dig burrows and also occupy existing rodent tunnels. They primarily feed on other insects, honey from bees, and tree sap.

The Elm sawfly is a species of wasp that burrows underground. They get their name from the females having a serrated edge on their ovipositor, or the organ she uses to deposit eggs.

Elm sawflies are harmless to humans because they have no way to sting. Their larvae cause significant damage to the trees they infest.

The horse guard wasp is a sand wasp. It feeds primarily on horseflies. They’re found all over North and South America.

The burrows of the horse guard wasp are simple and shallow in the ground. They’re not a tunneling wasp, and only dig one chamber underground.