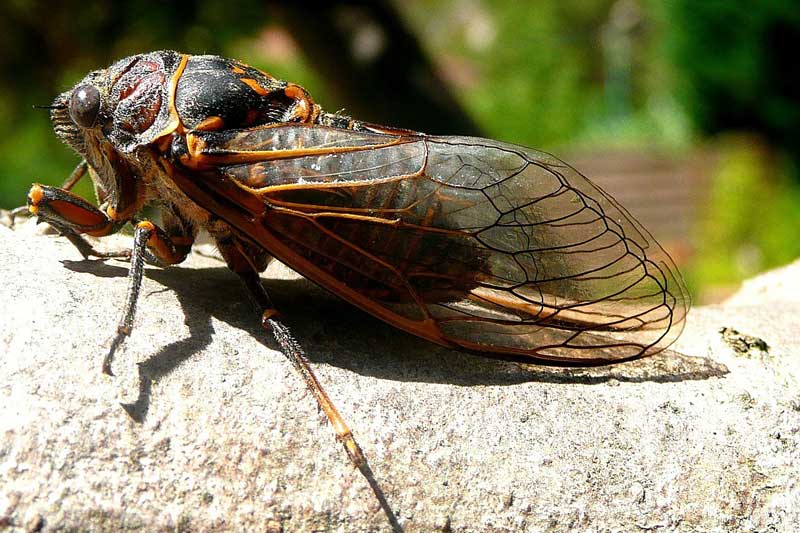 These invertebrates that have captured the fascination of many cultures for thousands of years are incredibly unique creatures. There are more than 3,000 cicada species, all of which can be separated into two categories: annual cicadas and periodical cicadas. As the name may suggest, annual cicadas are spotted every year. Periodical cicadas however, will spend many years underground preparing to emerge and begin the next stage in the cicada life cycle.

In this article we’ll learn more about why cicadas live underground for so long, as well as the 3 stages of their life cycle!

3 stages of the cicada life cycle

The cicada goes through 3 stages of life: egg, nymph, and adult. Annual and periodical cicadas have similar life cycles, though there are a few differences. Geographically speaking, annual cicadas can be found throughout the world in many different areas and climates. On the other hand, periodical cicadas are unique to the central and eastern areas of the United States.

The first stage of a cicada’s life cycle is their egg phase. Female cicadas can lay up to 400 eggs at a time, all put in many different areas. Normally, these eggs can be found in branches and twigs.

After about six to eight weeks, a cicada egg is ready to hatch! Once they hatch, cicadas almost immediately make their way underground and dig down to find plant roots to suck liquid from. Once they’ve dug underground, they tend to stay there for their entire developmental period.

An annual cicada tends to live for only about two to five years, so they won’t be underground for nearly as long as a periodical cicada will. However, there are many cicada species that have various developmental time frames, and many species have overlapping brood life cycles. As a result, annual cicadas will always be around, as some cicadas will emerge every summer!

Many initially thought that during this stage cicadas were basically dormant or hibernating while underground. This isn’t actually the case. Annual and periodical cicadas build tunnels and feed during this phase of their life cycle underground!

When a cicada is ready to return above ground, they have entered their second phase of their life cycle, the nymph stage. Periodical cicadas actually emerge from the ground together as a brood. However, all cicadas tend to wait for the weather and soil to be just right before they reemerge into the world. Keep reading below to see the brood map for all 15 broods of cicadas found in the United States.

For the most part, when the ground begins to thaw, cicadas will reemerge if they’re ready. This is why you tend to only see or hear cicadas in the summer. Not much is known as to why cicadas wait until the soil thaws (at about 65 degrees Fahrenheit). Scientists have suggested that this may have to do with the broods avoiding predators.

You may also like:  Are Daddy Long Legs Dangerous? - Myth or Fact

The nymph stage is also the time when cicadas shed their exoskeleton as they reemerge from the ground. Once they’ve freed themselves of their old skin, cicadas are able to grow their adult skin, which hardens and allows their wings to inflate with fluid!

Therefore, the nymph stage mainly consists of a cicada reemerging after brooding underground for however many years, then forming their new adult body and shedding their old exoskeleton. Once they’ve formed this new adult body, they’re ready for the next phase of their life.

Once a cicada enters their third and final life cycle stage, they are fully adult creatures. They have shed their former exoskeleton, they have emerged from brooding underground, and now they are ready to find their mates.

Most of the time, male cicadas will spend all of their time in trees looking for potential mates. These males will attract mates by “singing” or vibrating the air around them, eliciting the common noise we hear from cicadas every summer in the process. 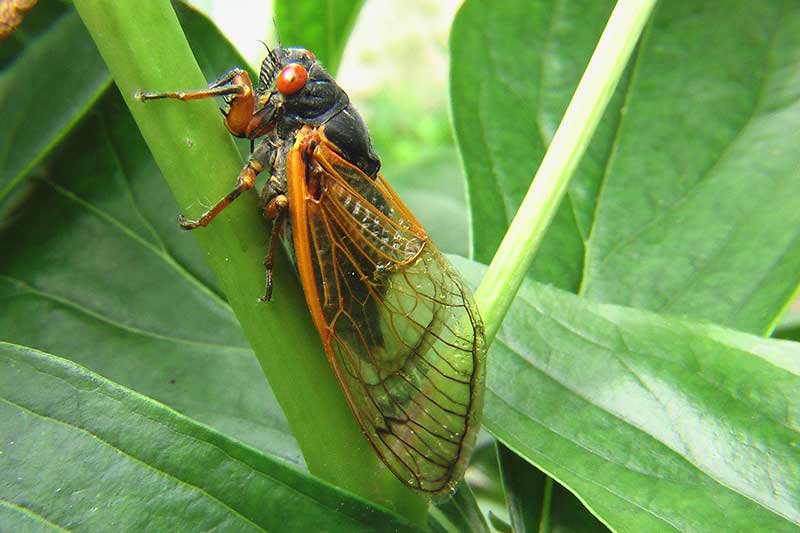 However, it’s worth noting that there are many different noises cicadas can make, even if they do sound similar to our ears. Some sounds are noises they make when they’re trying to attract mates, while other sounds are warnings when predators or danger are near.

After adult cicadas have emerged from brooding underground, they’ll only live for about four to six weeks. They have a very small lifespan during this time above ground, so it’s important for them to quickly find mates and start the cicada life cycle over again.

Why do cicadas come out every 17 years?

Periodical cicadas brood underground for 17 years before finally emerging and living their adult life above ground for a few months. Like clockwork, periodical cicadas can tell when these 17 years have passed, and when it’s time to return above ground and mate. While not proven, many scientists theorize that cicadas have an internal clock that helps them learn when the 17 years have passed by paying attention to the tree sap (and the changes it goes through each year) that they drink from while underground.

Periodical cicadas go through this 17-year burrowing period because, simply, that’s how long it takes for them to go through their developmental phase. Every cicada species is different, so cicadas can burrow underground for anywhere from two to 17 years!

Are all cicadas on a 17-year cycle?

Periodical cicadas can come out every 17 years, depending on their specific species, though annual cicadas will come out of the ground much sooner than that. Therefore, not every single cicada is on a 17-year cycle.

For example, many annual cicadas, those that appear in various parts of the world and are spotted every year, only live to be about two to five years old. Therefore, the time they spend during their developmental phase (their nymph cycle) underground will be far less than 17 years. Likely, annual cicadas spend about two years underground before reemerging and living for a few more months. 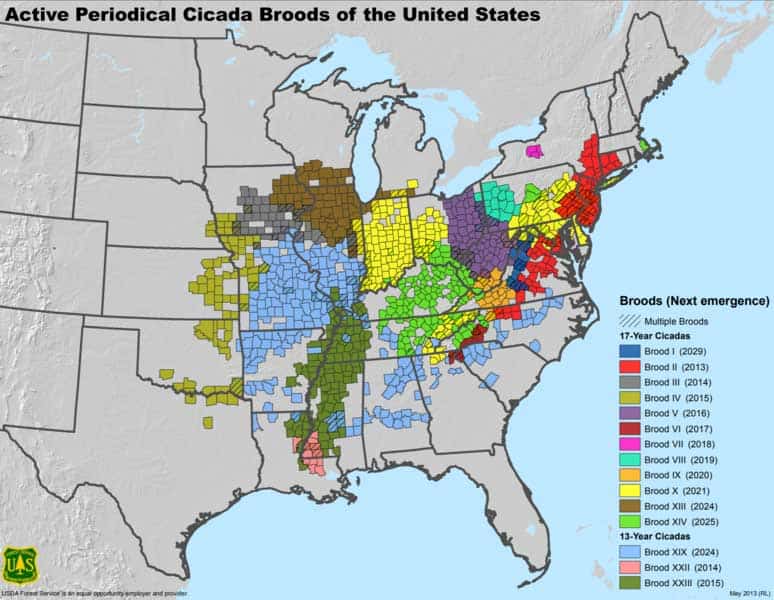 You may also like:  15 Insects That Destroy Crops (With Pictures)

There are 15 different broods of periodical cicadas that have been identified by scientists in the U.S. Above is a map of these 15 broods, both 13 year and 17 year cycles.

What time of year do cicadas come out?

In the United States, cicadas tend to only come out in the summer, though when in the summer varies. All cicadas, whether annual or periodical, will wait until the soil hits about 65 degrees Fahrenheit before appearing above ground. Soil will reach this temperature at different times in the United States. So when cicadas first appear for the year will vary depending on the temperature in each given location.

This is also the case for cicadas in other countries. Depending on the temperature, they may come out at different times. However, it is universally regarded that cicadas won’t come out until the temperature of the soil reaches 65 degrees. This is regardless of where in the world they’re brooding.

When can we expect Brood X cicadas 2021?

Brood X should have emerged from underground by the end of May in most states. However, not all states have seen these cicadas yet, as it’s still quite cold in the mid-Atlantic regions. As soon as the soil hits 65 degrees Fahrenheit, Brood X will surely reappear!

For the most part, cicadas are more beneficial than they are harmful. Whereas locusts can form a plague and be quite destructive, cicadas do not feed off of vegetation and instead drink sap in twigs, branches, and trees. While as many as 1.5 million cicadas can gather in an acre, their short lifespans keep these invertebrates from causing too much damage.

The benefits of cicadas: 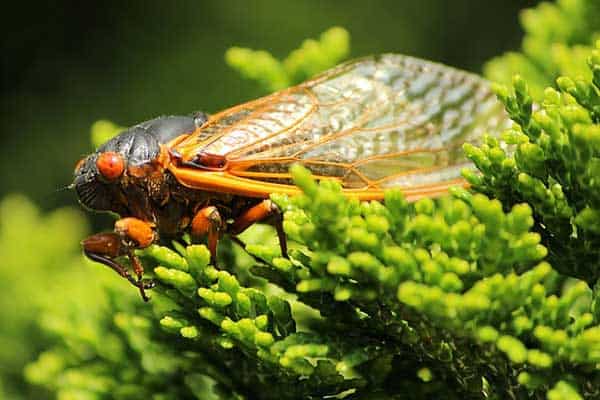 While cicadas can help aerate the soil and prune mature trees, they are also great nourishment for many different animals, which is a benefit for the whole animal cycle. In fact, cicadas have quite a lot of different predators they need to look out for, as they’re eaten by just about anything. However, despite their many predators, cicadas always seem to be able to mate and lay many eggs, thanks to the fact that they can sometimes emerge in the millions!

While mostly beneficial, cicadas in large numbers can occasionally cause some issues. For example, large swarms of cicadas in one area can cause damage to younger trees as they feed and lay eggs in them. Older trees, however, tend to not face as much damage from a cicada’s short lifespan.

Here are some more interesting facts about cicadas.

Cicadas have been fascinating creatures for many for the last thousand years. Because of their excessively long brooding cycle, cicadas are unlike any other type of invertebrate around. It’s natural for us to be interested in them!

While some cicadas may brood for decades, they actually don’t live above ground for too long. However, because of their brooding habits, annual and periodical cicadas will remain to be an interesting arthropod, especially prior to the emergence of one of the 15 broods.