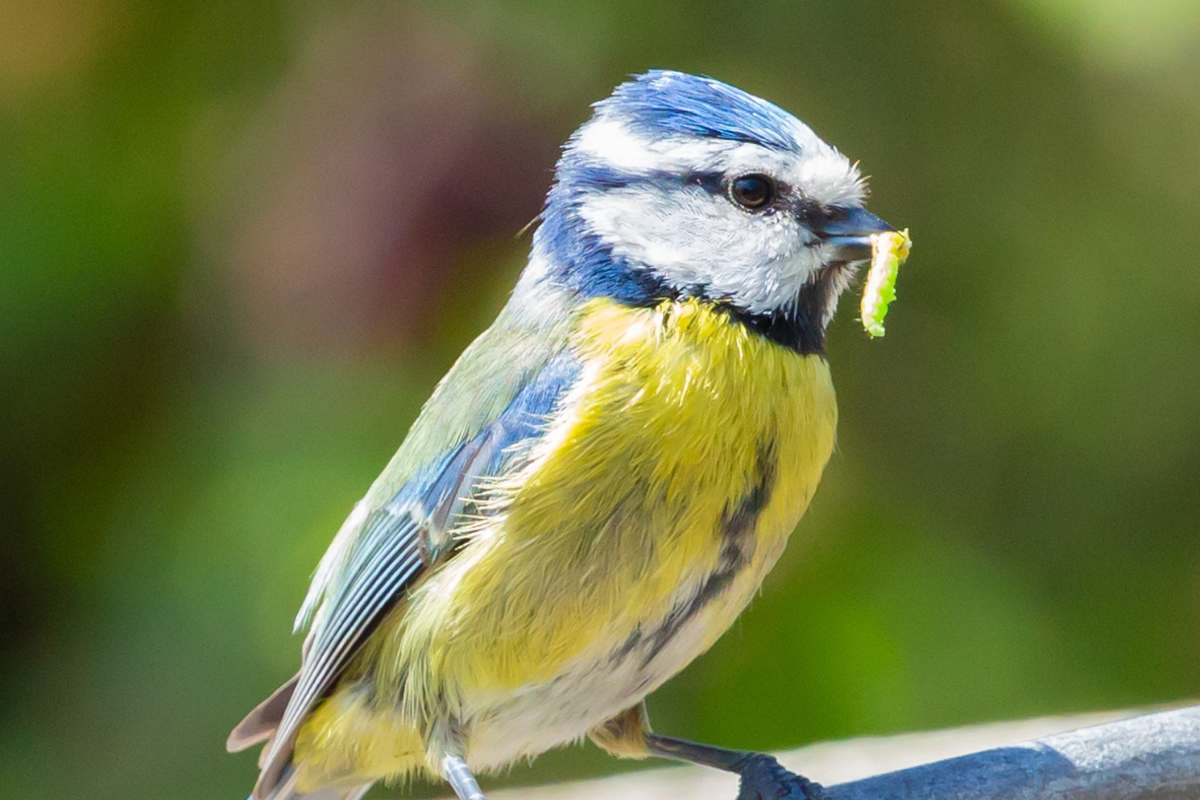 Perhaps an easier question to answer would be “what animals don’t eat caterpillars”? With their eye-catching colors, and slow-moving, protein-rich bodies, caterpillars are easy prey for both carnivores and omnivores.

Caterpillars are voracious leaf-munchers that cause millions of dollars of damage to crops every year. Some caterpillars even resort to eating other caterpillars if plant material is scarce. The Ashen Pinion (owlet moth)is one such caterpillar that lives in woods throughout the U.S. Midwest.

To counter the horde of predators constantly searching for their meaty bodies, some caterpillars have developed three evolutionary protections: color warnings, camouflage, and poisonous body parts. In the animal world, insects and caterpillars often exhibit bright or contrasting colors to warn potential predators they may be their last (toxic) meal. Others adopt colors mimicking their surroundings or grow spines on their bodies that resemble native plant branches.

Regardless of how hard caterpillars try to avoid being eaten, there are just way too many animals that eat caterpillars as part of their diets. Here is a list of 10 caterpillar feeders that would never turn down a tasty butterfly larva for their next meal.

Toads and frogs are amphibians but belong to separate families. While all toad species are classified as frogs, not every frog is a toad. The biggest difference between a frog and a toad is its skin.

Toads have thick, bumpy skin that retains water better to allow them to live farther away from water sources. Frog skin is thinner, smoother, and prone to dehydration, which forces them to live near creeks and ponds. However, frogs and toads eat caterpillars by catching them with their sticky tongues and promptly pulling them into their mouths. GULP!

North American “ladybugs” are small beetles with bright red, orange, or yellow bodies speckled with black spots. Tiny enough to crawl on top of a caterpillar without being detected by the caterpillar, ladybugs will start chewing on the caterpillar’s soft body until they are full, get knocked off, or the caterpillar finally dies. Ladybugs may dine on some pollen for dessert after a caterpillar meal.

Paper wasps leave their nests during the day to find food because they actually sleep at night, unlike many other insects. While this is good news for caterpillars who want to get some shut-eye without worrying about being eaten, it’s also bad news for caterpillars because they are a popular cuisine of paper wasps. Once a paper wasp stings and paralyzes a caterpillar, it will eat what it wants and then take chunks of the caterpillar back to the nest to feed to larvae.

A hungry mouse or rat will scavenge for its favorite foods–fruits, nuts, and wild vegetables–until it can’t handle a growling stomach anymore. Then, mice and rats will eat anything edible they can find, including caterpillars. However, since rats are bigger and need more protein than mice, you’ll likely see a rat munching on a caterpillar before you see a mouse eating a caterpillar.

Caterpillars need to constantly keep an eye out for the following birds: chickadees, sparrows, robins, bluejays, cardinals, warblers, wrens, woodpeckers, grosbeaks, finches, and swallows. These birds will not, in any circumstance, allow a caterpillar they have spotted to go uneaten.

In addition to eating caterpillars, birds carry smaller caterpillars back to their nests to feed hungry little birds. So, even if a bird isn’t particularly hungry, a caterpillar detected by a mother (or father) bird is likely fated to be the baby bird’s next meal.

Called “assassin” bugs because of their ability to sneak up on prey and snatch them quickly and efficiently, these true bugs insert their sharp beak into a caterpillar’s body, inject enzymes that paralyze the caterpillar, and liquefy its tissues. The assassin bug then sucks up the insides of the caterpillar by using its beak like a straw. Farmers will deliberately put assassin bugs in their fields to eat caterpillars responsible for destroying leafy crops.

If an insect or caterpillar falls into a backyard pond full of goldfish, it’s lights out for that bug or soon-to-be bug. Both “domesticated” goldfish and wild goldfish are omnivorous consumers of plants, aquatic creatures, and non-aquatic creatures. Of course, you can’t feed small, aquarium goldfish caterpillars simply because most caterpillars are bigger than tank goldfish.

Box turtles may walk onto roads to eat roadkill, which accounts for many box turtle deaths due to being hit by cars.

Caterpillars not only contain high amounts of protein but are also rich in fats and nutrients. That’s the primary reason why caterpillars are eaten by people in East Asia, Botswana, Cameroon, and other African countries where access to healthy food is difficult.

Many of these countries also have no problem eating other insects like crickets, termites, grasshoppers, and insect larvae. In fact, sun-dried caterpillars are frequently sold at street markets in Africa or East Asia for more money than agricultural items sold at markets.