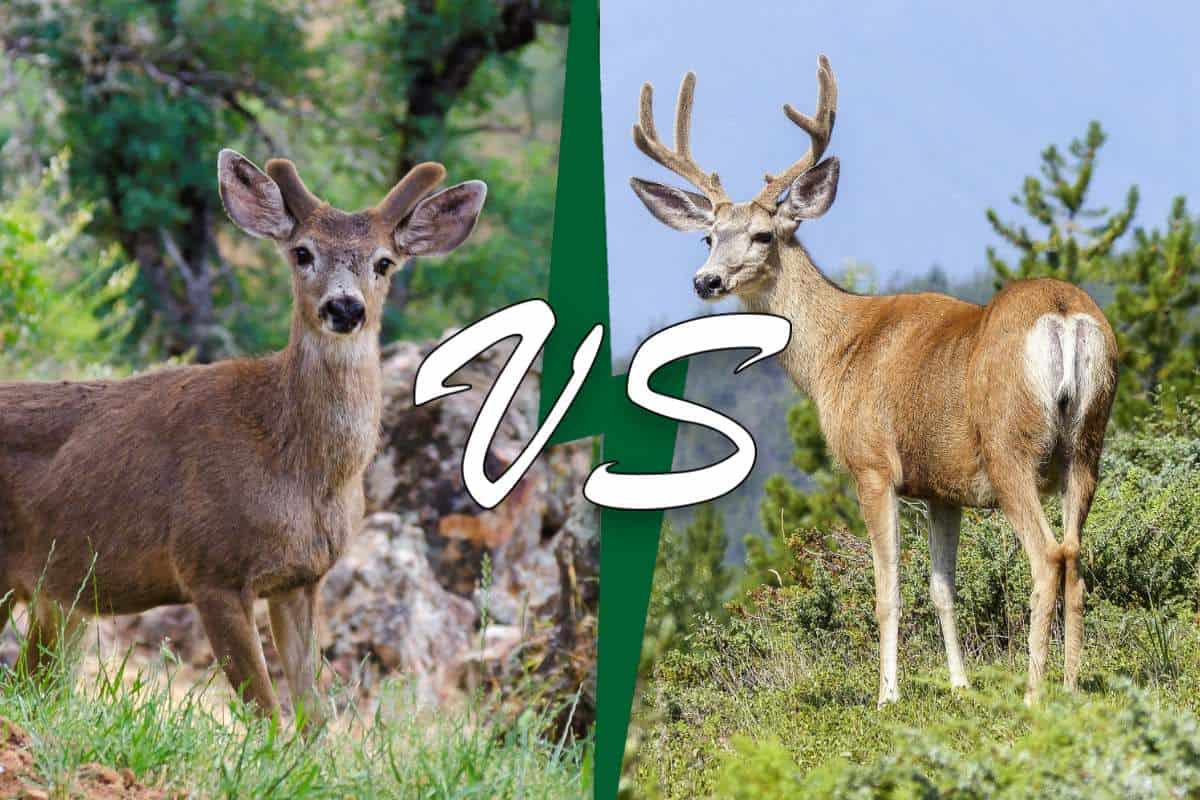 Mule deer and elk are two large deer species in North America. They may look similar at first glance since they both have antlers that are shed once a year, and both are popular for sport hunting. Even though they’re both deer, there are some key differences between the two species. This article will compare the mule deer vs. elk so that you will be able to recognize their differences and even identify them.

These two deer species are similar in many ways, but they also have many characteristics that set them apart. Continue reading to learn more about mule deer vs. elk.

The main difference you will notice between elk and mule deer is their size. Elk are some of the largest deer in North America, coming in second to moose. Mule deer are much smaller in size and stature.

Adult bull elk stand around 5 feet tall at the shoulders. They can weigh 700 to over 1,000 pounds.

Female elk are called cows. They weigh anywhere from 500 to 600 pounds and stand over 4 feet tall at the shoulders.

Mule deer stands about 3.5 feet at the shoulders, with does being slightly shorter than bucks. A buck can weigh over 300 pounds and does typically weigh up to 200 pounds. Needless to say, mule deer weigh a few hundred pounds less than elk.

The overall appearance of an elk also differs greatly from a mule deer. Mule deer look like other deer typical of North America, like the whitetail deer. In comparison, elk look more like big reindeer or are similar to caribou.

Elk, in appearance, is a bigger animal with a broader body, wider stance, and bigger features all over, like a bigger nose and hooves. Mule deer, while also large, look thinner compared to elk and have smaller bone structures and stances.

Mule deer and elk differ greatly in their colors. Mule deer are reddish brown or dark grayish brown in the summer and then fade to gray in the winter.

Elk, on the other hand, have more red in their color. In the summer, they’re darker reddish brown and then turn lighter tan in the wintertime.

Elk also don’t have any of the white on their backside and underbelly like mule deer. Elk are darker brown on their neck to their face, almost appearing to have a mane. Their belly and legs are also darker browns in color.

3. Bucks And Does vs. Bulls And Cows

This comes down to the etymology or origins of the names of the animals. Bucks in deer comes from a relation to male goats and the bleating sound made. Bull in elk comes from their bugling sound that compares to a bovine.

Both elk and mule deer are ruminants which means they eat plants and vegetation and then regurgitate it to chew the cud as a stage in their digestion. However, they have different feeding habits.

Mule deer tend to be browsers and foragers. They pick and eat as they move. They have a varied diet depending on their habitat but mostly feed on shrubs, grasses, and weeds that grow in desert areas and higher elevations.

Elk are mostly grazers but also forage occasionally. They primarily feed on grasses and will sometimes eat bark or other low-hanging vegetation from trees.

Elk prefer grasslands that produce lots of native grasses for their grazing. Many migrate to the same areas to feed during different times of the year.

Elk and mule deer antlers are significantly different. In both species, only the males grow antlers and shed them every year.

Elk antlers are tall and dark-colored. The tines grow from one large main beam that is much wider at the base than mule deer. One adult elk antler can weigh over 10 pounds and measure over 4 feet tall.

Behaviorally, there are some key differences as well. Elk are known for their herding behavior. They will often form large herds of up to 100 animals.

Some elk herds have reached upwards of 500 members. Interestingly, elk will separate by gender in their herds, with males in one area and females in another while grazing together.

Mule deer, on the other hand, tend to be more solitary creatures. While they are social animals, they rarely remain in large herds year around. They will usually only travel in small groups of 4 to 7 animals.

Mule deer may gather in group feeding areas during certain times of year and mating season but move in and out of larger family groups. Young bucks leave the group once reaching sexual maturity.

Elk are generally much louder than mule deer, and their calls can carry for miles. Mule deer calls are usually softer and shorter-range.

Mule deer grunt, snort, and bleat out sound, especially during the rut. The rattling of antlers is a good way for hunters to attract mule deer since that’s another common sound for bucks to make.

Mule deer and elk have overlapping habitats, but their preferences vary greatly. Mule deer ranges are much broader than those of elk.

Elk primarily remain in the Rocky Mountains further north than the mule deer range. Mule deer live in the western part of the continent ranging from Canada to Mexico.

Mule deer like dry areas with shrubs to forage. They are well-adapted to living in arid conditions and can be found in desert scrublands, sagebrush steppes, and rocky mountain slopes.