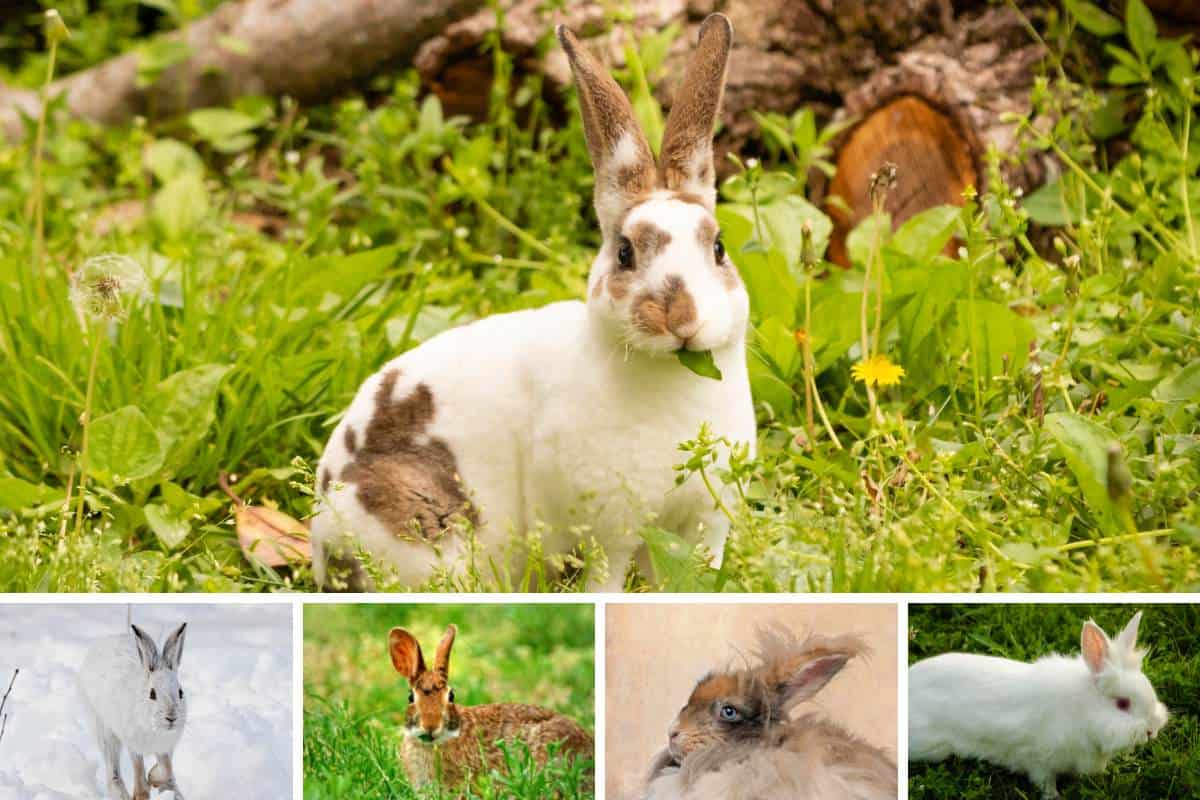 It is estimated that there are over 300 breeds of domestic rabbits found throughout the world, and that’s not even counting wild breeds. Even though they are closely related to one another, each rabbit breed has its own special characteristics that make them unique. Let’s take a look at 13 different types of rabbits and learn what makes them different from other rabbits.

Some breeds work well for pets, while others are raised for show, and there are even some that cannot be tamed. Whether you are considering adopting a rabbit for a pet or are just interested in learning about the different types of rabbits, the following list will help you better understand these impressive creatures.

The American rabbit may be one of the most well-known rabbits to keep as a pet. They weigh 10 to 12 pounds, and have fur that is either gray or white in color.

This rabbit species has an easy-going temperature and is not as energetic as some other breeds. This has led some people to assume the American rabbit is a lazy breed. This isn’t the cause, and they enjoy playing and exercise.

English lop rabbits have the iconic lopped or floppy-like ears that gives this type of rabbit its adorable appearance. English lop rabbits are intelligent creatures that have a pleasant disposition. They weight about 10 pounds and come in a wide array of colors and patterns.

The Eastern cottontail is found throughout the Eastern United States, Arizona, New Mexico, and Canada. They are considered the most common cottontail rabbit species and feature that inconic white, cotton ball-like tail. They can run up to 18 miles per hour and their vision is almost 360 degrees thanks to eyes that protrude just a little from their heads.

Angora rabbits are known for their thick and long coats that people often describe as being wool-like. While they do make good pets, because they are playful and social, they will need more maintenance than a breed with shorter hair. If you don’t regularly brush them, the rabbits themselves will begin to over groom themselves, which can result in digestive issues caused by consuming too much fur.

The lionhead rabbit gets its name from its facial hair, which resembles the mane of a lion. This is one of the most popular domesticated breeds, used as a show rabbit and pet.

They weigh in at 4 pounds or less, and are fairly energetic. They are sweet creatures that will follow their humans around.

The mini rex is a popular rabbit breed that is rather small in size, weighing in at no more than 4 pounds. Their appearance is often referred to as “stuffed animal-like” thanks to its plush and dense fur.

They come in various patterns and colors, from seal point markings to a solid hue. They have a gentle nature and are friendly, but they are also rather fragile and children should not be left unattended with them, nor should they be handled roughly.

You may also like:  Mule Deer Vs. Elk (8 Key Differences)

Tan rabbits are considered a show breed, but can also be kept as pets. They have a lean, arched, and compact body that is covered in short, glossy fur.

This breed was developed in the United Kingdom in 1887. It was originally bred from a wild colony, and its original color was black. They weigh between 4 and 6 pounds, and have a average lifespan of 8 to 10 years.

The Netherland dwarf rabbit originated from the Netherlands, and features a feisty attitude with a lot of energy. This sometimes surprises people because these mini rabbits weight less than 3 pounds! In fact, this rabbit is one of the smallest rabbit breeds, and is a common sight in rabbit shows.

Harlequin rabbits are intelligent creatures that are both docile and playful. They are colorful breed that comes in various markings and are either white and black, or orange and black.

These rabbits originated from France and make wonderful pets. They can also be trained to use a litter box.

Polish rabbits, which are not from Poland by the way, are laid back mini rabbits who have a curious and energetic nature. They are small and gentle, and get along with other rabbit breeds and even other animals. They weigh no more than 5 pounds and have an average lifespan of 10 years.

Snowshoe hares are named after their large back feet that are furry and help them maneuver through the snow without sinking. They measure between 18 and 20 inches long and weigh up to 4 pounds. Snowshoe hares are native to the Appalachian and Rocky Mountains, as well as New England, Michigan, Minnesota, Montana, Alaska, and the Pacific Northwest.

Desert cottontail rabbits are found throughout the Western portions of the United States. Their range extends from eastern Montana down to Central Mexico.

They weigh less than 2 pounds, measure about 13 inches long, and have a lean body type. While they are known as prolific breeders, these rabbits typically have a lifespan of no more than 2 years.

Also known as cane-cutter, the swamp rabbit is found in wetlands and swamps throughout the southern part of the United States. This species thrives in wet areas and prefer to stay close to a water source. They are also often seen swimming.

The adult swamp rabbit weights over 4 pounds and can live up to 9 years. They feed on grasses, shrubs, twigs, sedges, seedlings, and various other plants.