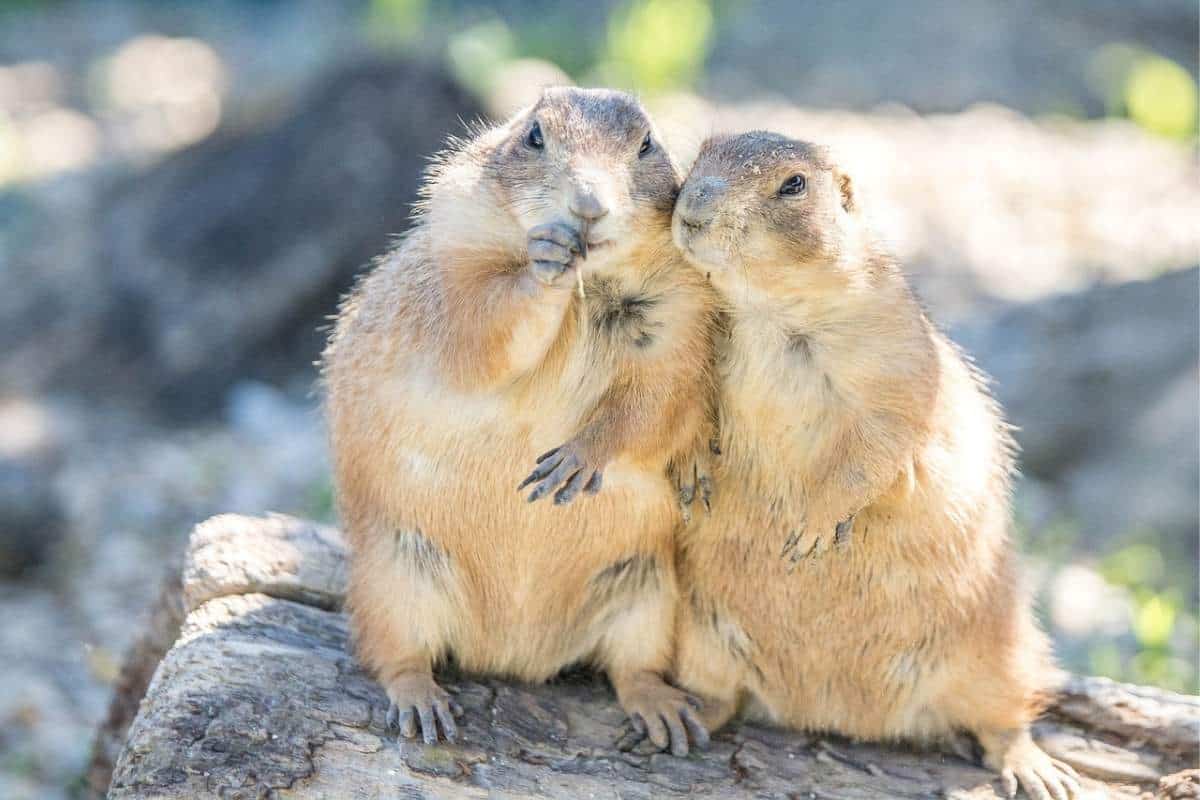 Despite their name, prairie dogs aren’t actually related to dogs at all. They are actually most closely related to squirrels, marmots, chipmunks, and groundhogs – all in the family Scuiridae. Not only are they adorable and fun to watch, they are highly intelligent and complex social creatures. Read on for more intriguing facts about these fascinating rodents.

1. They are party animals

Prairie dogs are social and playful, often seen romping around outside their burrows. They greet each other with kisses and nuzzles, and babies frequently wrestle and chase each other. They’ll often groom each other and communicate loudly.

They even have a signature dance move – something called a “jump-yip” where they will stand up with their arms outstretched and make a loud yip. Once one prairie dog engages in this jump-yip behavior, the others will join in.

Their sharp claws and teeth make prairie dogs especially suited to living underground. They dig complicated underground tunnels with ventilation systems and a variety of chambers for specific purposes.

In a prairie dog burrow, you’ll likely find nursery rooms, restrooms, sleeping quarters, and food storage areas. These intricate underground tunnel systems are referred to as “towns.” Prairie dog colonies can have between 30-50 entrances per acre.

3. They are highly social and have sophisticated communication skills

Having a bit of a reputation for being the most vocal creatures of the grasslands, prairie dogs are known for their bark-like calls and other vocalizations. They are amazing communicators, and their language has been said to rival that of dolphins and chimpanzees. Researchers have learned that prairie dogs have specific barks for predators and have chirps to describe appearance, speed, size, and even color.

4. They support over 130 other species in their ecosystem

Aside from being a food source for carnivorous predators, prairie dogs contribute to the food chain in other ways. Their tunneling creates underground shelters for other animals, including snakes and birds.

Their burrowing activities aerate the soil, making it more permeable to water and supporting vegetation. They keep the grass cut short, often leaving bare patches of soil that attract insects that birds and other insectivores feed on.

5. They have terrible night vision

While they have excellent vision during the day, their night vision isn’t as keen. Because many of their predators come out at night, prairie dogs stay safely huddled in their burrows at night.

This makes them diurnal, or active only during the daytime. They keep themselves very busy during the daylight hours so that they can keep an eye out for danger.

6. Prairie dogs do not hibernate

Contrary to popular belief, prairie dogs do not hibernate, but rather go dormant. Dormancy is different from hibernation; true hibernation involves lowered body temperature and reduced heart rate and metabolism. Dormancy, on the other hand, does involve slower bodily functions, but not to the same degree or length of time as hibernation.

Hibernating animals sleep through the winter, but prairie dogs go dormant during extremely cold months. This means, unlike hibernating animals, they are still awake, though lethargic. They live on the fat they stored up when food was more available.

You may also like:  Can a Dolphin Kill a Shark? That Depends...

7. They don’t back down from a fight

Prairie dogs are feisty little rodents, and have sharp claws and teeth with which to defend themselves. They have no qualms about killing off their competition, often including nearby ground squirrels. They’re tough, too. With their muscular hind legs and fast reflexes, they make for skilled fighters – not to mention they can run at speeds of up to 35 miles per hour for short sprints.

8. Family is important to them

Even though prairie dogs reproduce at a slower rate than most rodents, they have strong family ties. Sisters stick together for life, living in close-knit groups called coteries.

Coteries may include one or two males, but they often wander between neighboring communities. Females, however, stay put to help each other raise pups and protect their burrows.

9. Their populations have shrunk in recent years

Human encroachment and disease have contributed to the decline of prairie dog populations over the past few decades. Ranchers and farmers tend to view them as pests, so prairie dogs are often the victims of eradication efforts. At one point, there were hundreds of millions of prairie dogs in North America, but their numbers have been reduced to 10-20 million.

Prairie dogs are also susceptible to the Yersinia pestis bacteria, famously known as the cause of bubonic plague. Since they keep their distance from humans, they are unlikely to transmit the bacteria to people. Vaccination efforts have helped to curb the spread of disease, but unchecked, the plague can wipe out 90-95 percent of a prairie dog colony.

Prairie dogs are omnivores, meaning they will eat a variety of foods that include insects and plants. Primarily, though, they live on a diet of grasses, leafy plants, and roots.

Because these foods contain a high water content, prairie dogs don’t have to drink. They get plenty of water from their diet, rain, and snow.