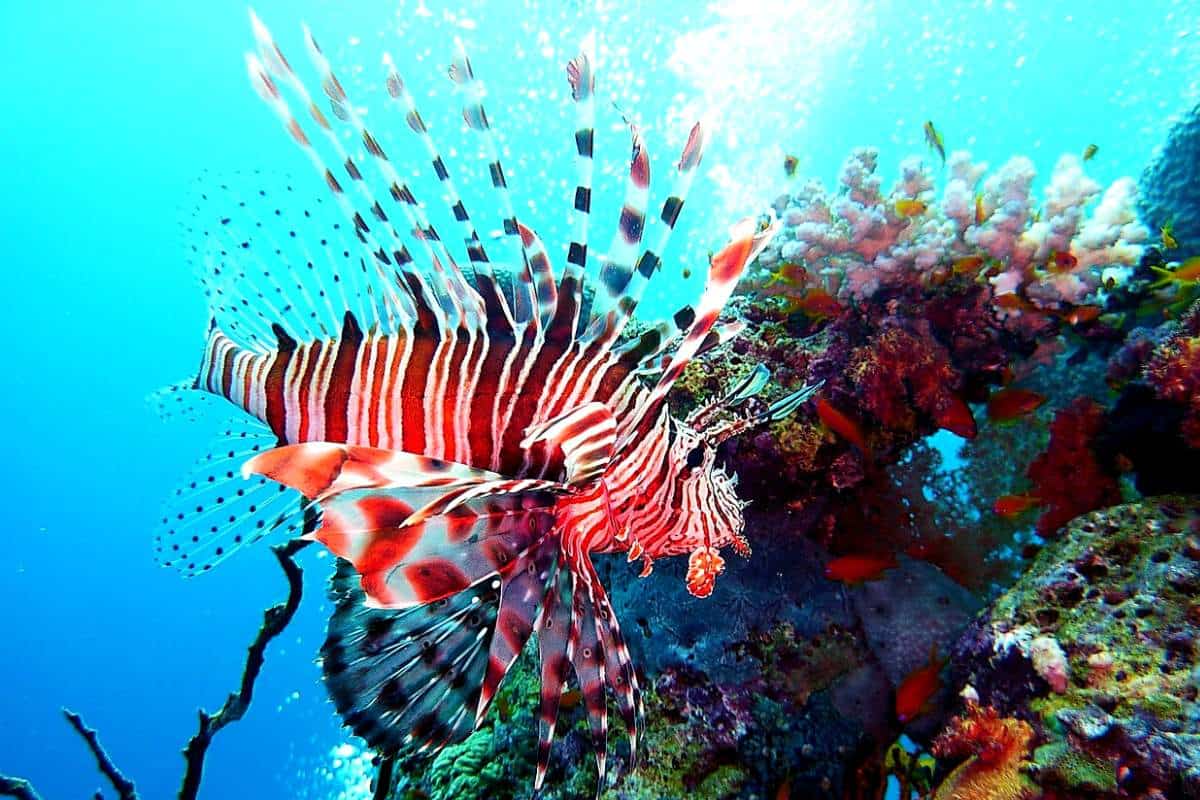 The lionfish, scientifically named Pterois, is a unique fish native to the South Pacific and Indian Oceans. They make popular additions to aquariums across the world. However, with these fish, there is more than meets the eye. This article details twelve interesting facts about lionfish.

These creatures are very unique in appearance, with maroon, brown, and white stripes. Lionfish can grow up to 18 inches in length and weigh up to 2.6 pounds. These fish can live between 5 and 15 years. When in captivity, their lifespan is at the higher end of that range.

Lionfish have spines protruding from their back, underside, and pelvis. They use these spines for self-defense. It is a useful mechanism, especially considering these spines are highly venomous.

When one of these spines punctures something, venom is pushed out of the spine and into the unlucky victim. This venom is a neuromuscular toxin akin to the toxicity level of cobra venom. If a human is punctured by these spines, it is accompanied by immense pain, bleeding, bruising, redness, and swelling.

2. Lionfish Have a Large Stomach Capacity

Lionfish are a ravenous species. If something fits in their mouth, they will eat it. They have a special adaptation to help them accommodate their immense appetite.

The lionfish’s stomach can expand up to 30 times its regular size. This allows the lionfish to go back for seconds if they want.

Most fish species have comb-shaped scales with spiny projects like small teeth on the sides attached to the fish. Lionfish have cycloid scales, which are more circular or oval-shaped and are smooth on the edge.

4. Lionfish Have Tentacles Around the Mouth

Lionfish have soft tentacles that frame their mouths. Lionfish use these tentacles to sense prey in the water around them, aiding them in their excellent predatory behavior.

Lionfish are ravenous carnivores that are one of the top predators of the coral reefs in which they live. Their diet mainly consists of small crustaceans and fish. They consume over 70 different marine species, including shrimp, crabs, grouper, yellowtail, parrotfish, snapper, and more.

6. There are Several Species of Lionfish

When you think of a lionfish, you might think there is only one kind. However, there are actually twelve species of lionfish.

Species include the Red Lionfish, Spotfin Lionfish, Luna Lionfish, and more. All species look similar but can vary in color. They also have similar behaviors.

7. They are an Invasive Species

Though native to Indo-Pacific waters, some lionfish species have been introduced to Atlantic waters along the US coast due to people dumping them in the ocean from their home aquariums. In these non-native regions, their immense appetites pose a serious threat to the coral reef wildlife.

Unlike other fish species that only reproduce once per year, the female lionfish reproduces year-round. In order for the chance to mate, the males will use their spines in an elaborate display to attract a mate as well as intimidate any other males around them.

You may also like:  Do You Need a License to Hunt Pythons in Florida?

When the female is ready to drop her eggs, she will move toward the surface of the ocean to release her egg sacs. After she releases them, the male turns upside down and spurts a cloud of sperm onto the sacs to fertilize them.

9. Female Lionfish Can Lay a Lot of Eggs

Since the lionfish reproduces year-round, the female can lay A LOT of eggs. Lionfish mature at the age of one year and then lay eggs every three days until they die.

Each time they lay eggs, they can produce between 25000 and 30000 eggs. This adds up over time. In fact, one female lionfish can lay up to 2 million eggs every year.

10. Lionfish Eggs are Protected by a Noxious Chemical

Lionfish may lay a lot of eggs, but those eggs also have a higher probability of hatching. This is because a lionfish’s egg sac is surrounded by a noxious chemical, and this chemical makes it a lot less likely that a predator will consume the eggs before they hatch.

Lionfish are nocturnal, meaning they are most active at night. They have specialized taste buds in their mouths that help them find food in the dark. They tend to spend their days along ledges and in crevices of the coral reefs.

This behavior depends on the lionfish’s location, though. Some lionfish in the Atlantic Ocean have been seen out and about during the day and have been found to have full bellies during the day.

As mentioned, lionfish have very large appetites. They can also eat prey that is up to 30% the size of their bodies. When they find something they want to eat, they use their spines and tentacles around their mouths to corner the prey and then swallow it whole.