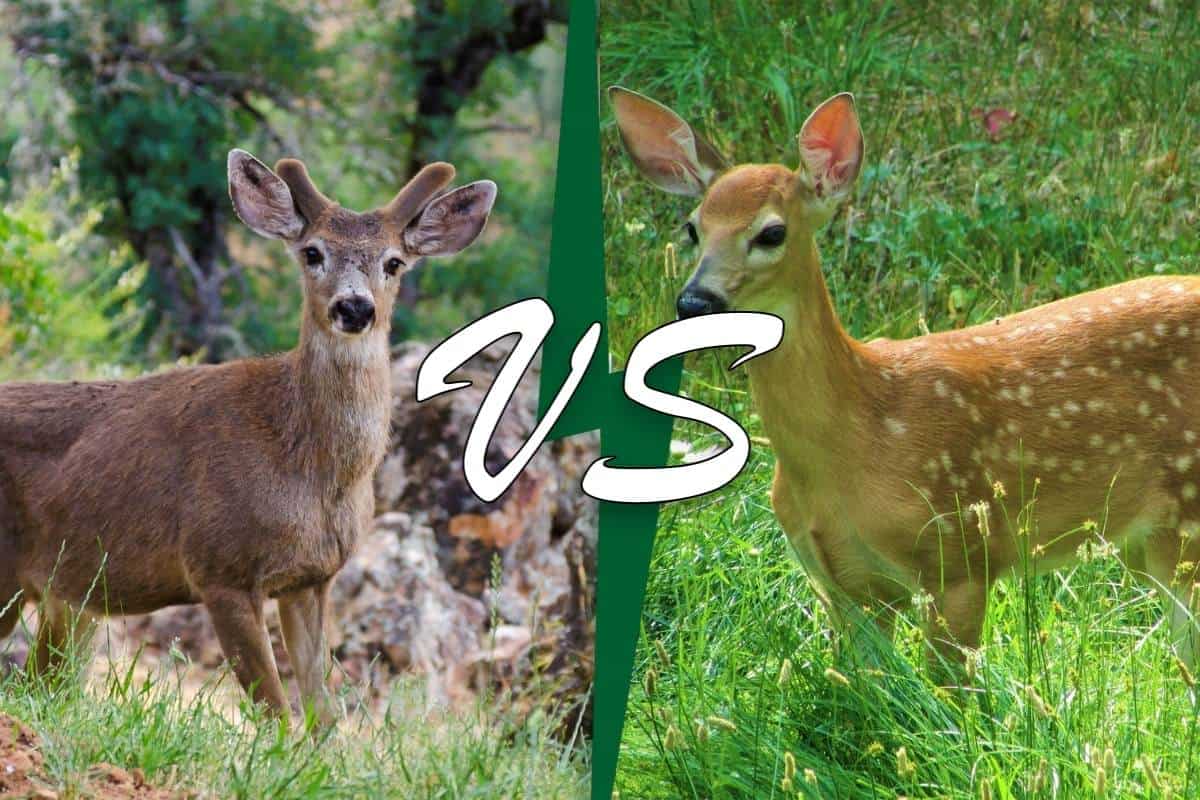 Mule deer and white-tailed deer look very similar to one another, but they are actually very different. These two species are native to North America, and both are very popular among deer hunters. Aside from the size differences, there are a number of other noticeable differences between the two.

This article will compare the mule deer vs. white-tailed deer so that you can identify them easily and be able to recognize some of the main differences between them.

These two species of deer are similar in many ways, but they also have many traits and characteristics that differentiate them. Continue reading to learn more about mule deer vs. white-tailed deer.

The first most noticeable difference between the two deer is their size. Mule deer are usually significantly larger than white-tailed deer.

Mule deer can range in size from 4 feet up to 7 feet long from nose to tail. Adult bucks typically weigh 200 pounds but can range between 120 and 300 pounds.

The average mule deer doe weight is around 150 pounds. However, does can weigh anywhere from 100 to 200 pounds.

White-tailed deer size can vary significantly depending on their range and habitat. Bucks range from 150 to 300 pounds in weight but typically stay below 200 pounds. White-tailed deer does average around 100 pounds.

White-tailed deer are more affected than mule deer by a phenomenon called Bergmann’s principle. Simply put, white-tailed deer in warmer climates further south tend to be smaller than those in northern regions.

Overall, mule deer are more muscular and have a much larger bone structure than white-tailed deer. They are thicker through their body and neck and also have a bigger muzzle.

Mule deer and white-tailed deer are very similar looking in the summer, but when it’s winter time, mule deer will be a darker brown and have more gray patterns.

White-tailed deer have coats of white on their throats, around both the eyes and nose and under the stomach. Usually, a reddish-brown color in the rest of the body, white-tailed deer fur gets grayer during wintertime.

The mule deer has more gray. Their face is light gray, and its body is a gray-brown color. The light or darkness of their coat depends on their surroundings.

Both deer have a color that blends into their surroundings. They differ in the colors on their underbelly, neck, and back end area.

3. Mule Deer Ears Are Much Larger Than white-tailed Deer

One of the easiest ways to tell the two deer apart is by their ear size. Mule deer have much larger ears than white-tailed deer.

Mule deer are named for the large “mule-like” ears that come from their evolution. These ears are thought to help them better dissipate body heat in hot desert environments.

Mule deer live in open country where they need to be able to hear predators approaching from a distance. Needless to say, they have exceptional hearing.

Both deer can move and rotate their ears to hear their surroundings. White-tailed deer ears tend to be rounder and not as big and broad as the mule deer.

You may also like:  4 Types of Marine Mammals With 16 Examples

The size of a deer’s antlers is largely dependent on the age of the deer, its habitat, and its diet. Though only males of both species generally grow antlers, there are a few differences as they mature.

Mule deer tend to grow antlers that fork in two directions as they grow, creating a wide and tall set. White-tailed deer antlers are smaller than those of the mule deer because their tines don’t grow the same way.

White-tailed deer have evolved to be able to live anywhere. They reside in all sorts of habitats, from swamps to mountains and forests to plains.

White-tailed deer are constantly expanding into new areas. They can be found in several Canadian provinces as well as Mexico, Central America, and South America.

The mule deer range is smaller. They like higher elevations and inhabit more open areas and plains. They also tend to avoid areas of human development, unlike white-tailed deer.

White-tailed deer are much more cautious and skittish than mule deer. When white-tailed deer take off to escape a predator, they run very fast. They also bounce and jump easily with little effort. This is called “stotting.”

Mule deer are larger and more lumbering in their escape. They trot and gallop more than they prance bounce, and jump. They’re also not as fast at running as the white-tailed deer.

8. Mule Deer Have A Longer Lifespan Than white-tailed Deer