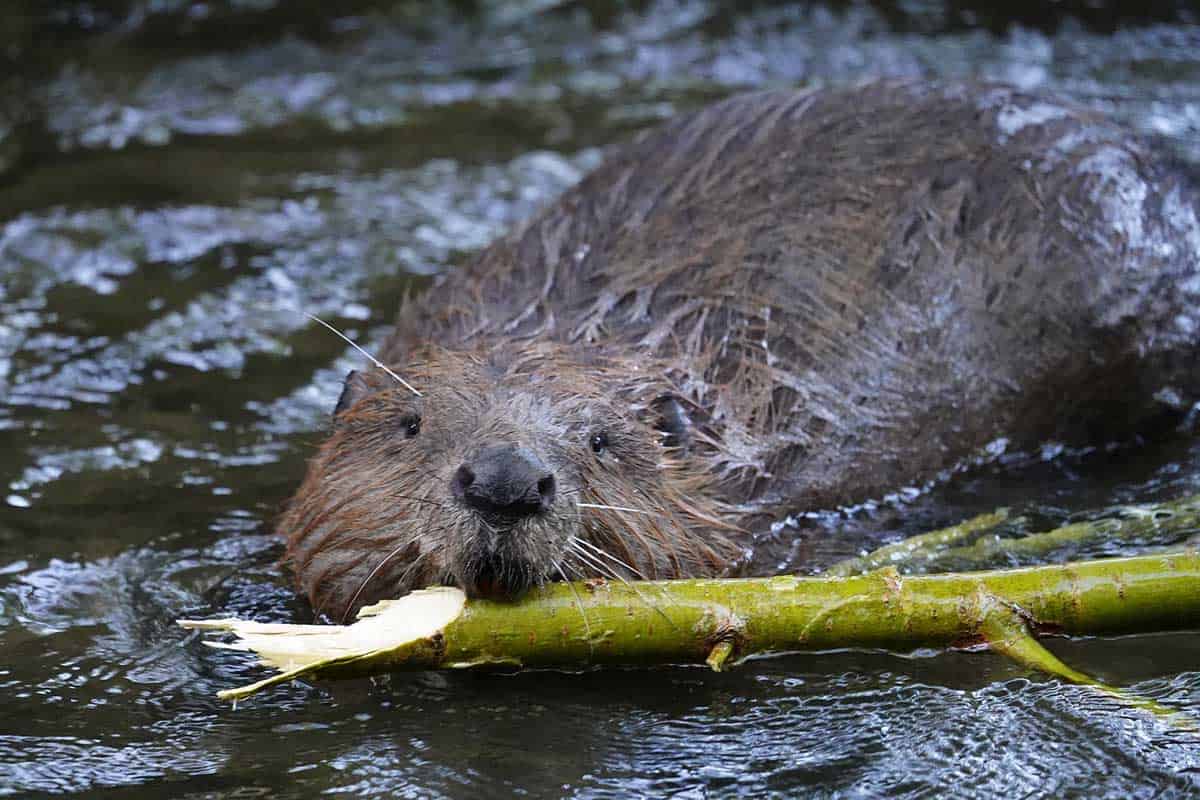 Considered the largest rodents in North America, beavers are known for their bright orange teeth, long flat tails, and webbed feet. They use all these characteristics to chop down trees, break down branches, solidify mud, and create magnificent dams. They’re also known for building dams in moving water with sticks that they collect, but do beavers live in their dams?

Do Beavers Live in Their Dams?

Beavers don’t actually live in their dams. They use these dams as protection from predators and as a lodging area. Beavers live in a safe and deep pond created by the deep water of the dam.

Why Do Beavers Build Dams?

Beavers build dams to create ponds in streams and slow moving water which facilities the building of a beaver lodge. These dams serve as a protection for beavers and can house their food when winter comes and contain underwater passageways to their lodge.

Since these rodents cannot defend themselves on land from coyotes, mountain lions, and wolves, they use their swimming capabilities to run away from these animals.

Dams protect beavers by covering them from prying eyes and the water’s strong currents. When winter comes and the stream is frozen, these rodents hide in the lodge area near the dam, where they tend to their offspring and keep warm during the cold climate.

Beavers will sometimes skip building a dam if the environment is not suited to it, like lakes and fast moving streams.

How Do Beavers Build Dams?

As mentioned earlier, beavers use their unique features to create their dams. They use their big and strong teeth to cut down trees and huge branches. They put trees into the stream to slow down the current of the water.

The beaver will then gather the sticks, twigs, branches, and mud with their mouth and swim towards the fallen trees. Once they have everything that they need, they use their front paws to put all the items together and start building the dam.

They start off the base with stones and mix it with mud and plants to cover the upstream side. They then put together the pieces of wood they gathered, building upwards.

Beaver dams are much thicker at the bottom, but it also has a shallow slope where the water is coming from to let the water push down the dam’s foundation. This allows the structure to be in place even if the current of the water strengthens.

Since beavers are great swimmers, they build an underground entrance where they are the only ones that can enter and exit their structure. There’s also an eating chamber and an area where they store their food when winter comes.

How Many Beavers Live in a Dam?

There’s no specific limit on how many beavers can live in a single dam. However, you’ll often find at least two to ten beavers in a dam. The average colony size of a beaver family is about five to six members, including the parents.

Generally speaking, a dam will only accommodate one beaver family because these rodents are territorial creatures. They are also known to fight other beavers and families if they become too close to their dam.

You may also like:  How Do Squirrels Survive in the Winter (6 Ways)

What Time of Year Do Beavers Build Dams?

Beavers are famous for being hard workers and having strong work ethics. They build their dams during three full seasons, starting from spring down to the summer, and fall. They also maintain their dams during these seasons, repairing any possible damages or adding height to their structure.

Beavers are nocturnal creatures, they tend to work at night, ensuring that their dams are prepared for the winter. They start their day at 7 in the evening, eating and grooming themselves.

Once they are done, they go out of their pond and lodge to start marking their scents, checking the boundaries of their territory, and finding more food for the family. After 12 hours, they will return to their lodge to eat and sleep.

Beavers are rodents, and they do not hibernate. These creatures have difficulty moving around during winter because the stream is frozen, and snow covers almost everything. Before this season starts, beavers would prepare months in advance to ensure that the whole family has enough food supply until the following season.

During winter, they spend the entire season inside their lodges. They only come out when they need to get food from their pond. Since the water is frozen, beavers must swim under the ice to get what they need before returning to their lodge.

Are Beaver Dams Beneficial to the Environment?

Beaver dams are not only beneficial to this species, but it also helps our environment. Their dams create a wetland habitat for other animals to live on. It also increases the biodiversity of the area where the dam is located because it controls the stream’s flow and avoids flooding.

Additionally, these dams improve the water quality because it filters out any pollutants found in the water with the stones, mud, and sticks that the water has to go through. Lastly, these dams store water during drought, ensuring that all species still have water to drink from.

Beavers are actually one of the most important animals on the planet. Often called ecological engineers, they create dams with stones, mud, twigs, and branches that can last for decades. These dams manipulate the flow of streams that will suit the preferences of the beavers.

But beavers don’t live in the dam itself, but in a nearby beaver lodge where eat, sleep, and cultivate their offspring. They have underwater passageways and storage areas where they keep their food during the winter. The purpose of the dam is to create a pond in slow moving water, which is the perfect place for them to build their lodge.